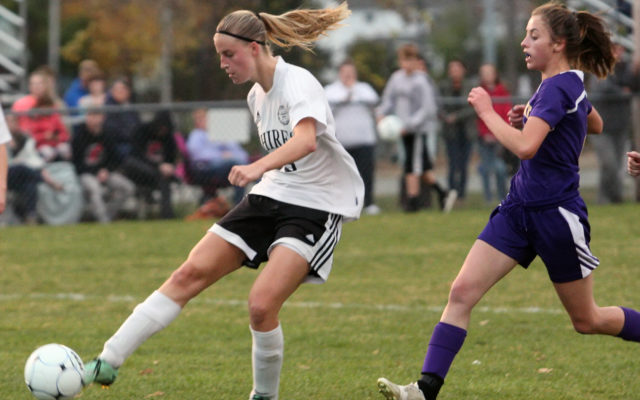 Joseph Cyr • October 24, 2017
No. 1 Houlton (14-1 overall) advances to Friday’s semifinal round where the Shires will host No. 4 Orono in a rematch of last year’s regional championship. Orono beat No. 5 Penquis 4-3 Tuesday afternoon.

No. 1 Houlton (14-1 overall) advances to Friday’s semifinal round where the Shires will host No. 4 Orono in a rematch of last year’s regional championship. Orono beat No. 5 Penquis 4-3 Tuesday afternoon.

Houlton and Orono have met twice this season, with the Shires winning both contests — 3-2 Sept. 9 in Houlton and 3-0 Sept. 30 in Orono.

“Bucksport came out and tried to play us straight up, and fortunately we were able to score an early goal which prevented them from making it a defensive game,” Houlton coach Tim Tweedie said.

Hoops put the Shires on the scoreboard 10 minutes into the game as she received a pass from senior Tyra Gentle and was able to beat Bucksport goalie Kaylee Knowles. Bouchard scored six minutes later as she took a through pass from Amelia Ivey and blasted a shot from the 18-yard line. 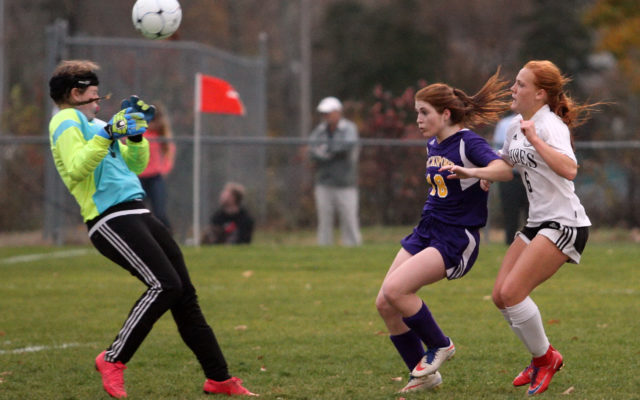 “There is a big difference between being up 2-0 versus 1-0,” coach Tweedie said. “It changes the shape of the game and how aggressive you can play.”

Flewelling made it 3-0 in favor of the Shires when she converted a corner kick that sailed into the net unassisted.

The Shires dominated the game statistically, outshooting Bucksport 28-4. Knowles made 18 saves for the Golden Bucks, while Houlton keeper Tessa Solomon had four saves.

Hoop’s second goal came with 6:08 to play in the first half as she received another pass from Gentle and buried it into the corner of the net for a 4-0 lead. Bouchard struck again with 3:18 to play as she stole the ball from a Bucksport defender near midfield and carried it all the way to the net for a breakaway goal.

In the second half, Houlton was able to go deep to its bench to keep players fresh.

Coach Tweedie added that facing Orono for the third time this season will be no easy task.

“We have to stay hungry because there are still a lot of good teams we will have to face to meet our goal of a state title,” Tweedie said. “This is four straight years we will be appearing in the semis. So they know by now. We have to stay focused and aggressive.”