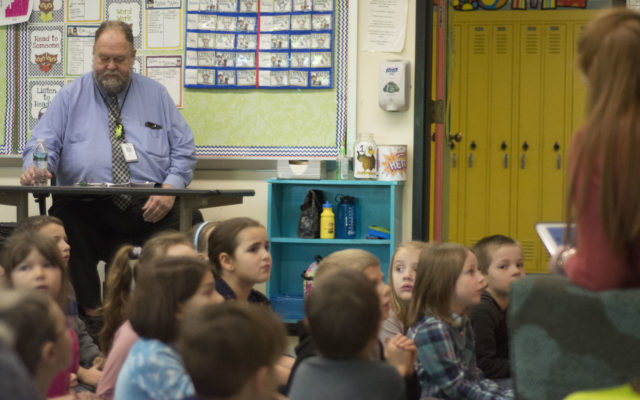 Chris Bouchard • November 18, 2017
Maine Education Commissioner Robert Hassan was pleased with the progress he witnessed Wednesday when he visited Limestone Community School to check on a literacy pilot program initiated here in December 2016.

LIMESTONE, Maine — Maine Education Commissioner Robert Hassan was pleased with the progress he witnessed Wednesday when he visited Limestone Community School to check on a literacy pilot program initiated here in December 2016.

The program, dubbed the MoMEntum K-3 Literacy Pilot, began as an effort to support and strengthen literacy among younger students by utilizing iPads. The state is partnering with Apple on the pilot project, which is similar to the Maine Learning Technology Initiative that provides both tablet and laptop computers to thousands of teachers and seventh and eighth graders across Maine. State officials selected one school in each of Maine’s nine superintendent regions for the pilot project based on economic need.

“It’s wonderful to see the students engaged and working on their learning as much as they were [today],” Hassan said in Limestone Wednesday. “It’s very encouraging seeing what individual students were producing for writing, being able to read, and how they were hanging onto every word of their teacher.” 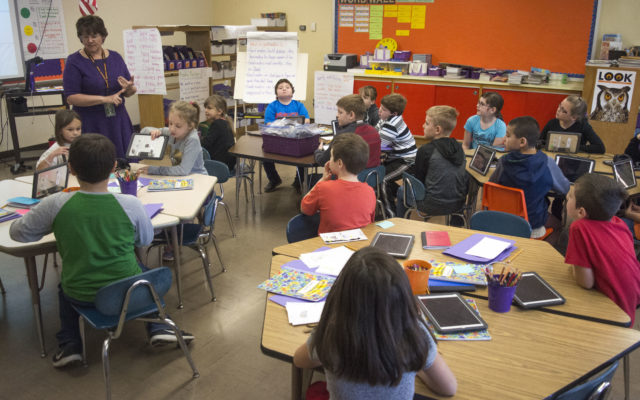 The pilot project will continue through October 2018, at which point the tablet computers will remain in the nine schools, and the participating towns can decide whether or not to fund associated costs, such as access to the educational software and applications, to continue the program.

Hassan watched Wednesday morning as first grade teacher Emily Keaton showed K-1 students how to use the technology to draw their own unique monsters and to use the microphone on the device to record “three describing words” the youngsters wanted to associate with their conceptual creatures.

“I’m going to make mine scary,” a youngster said as she began to draw.

The commissioner then spoke with second and third graders in Carrie Reed’s 2nd grade classroom as those students took turns showing him “collections” of additional information created for them by their teacher, as well as their progress in learning about “feeling words” via various apps installed on their iPads.

Reed explained that the “collections” are created in an app called “Epic,” and allow students to access supplementary information while she reads stories aloud to the class. She said that, while reading a chapter book that describes dungeons, rats, and castles, for instance, students could follow along with their collections in the app to read more about those topics and obtain a greater understanding of the story.

“They would have access to information like what dungeons look like,” Reed said, “or what the author needed to know about rats and castles to write the book.”

Reed also uses an app called “eSpark,” which requires students to take three standardized tests a year, and creates personalized “quests” based on areas where each needs work.

“It takes the data, analyzes it, and creates quests for them to work on those particular skills,” Reed said. “It’s very individualized, and hopefully the next time they take the test they have less trouble.”

As a result, work that once was considered tedious is now fun for many Limestone students. 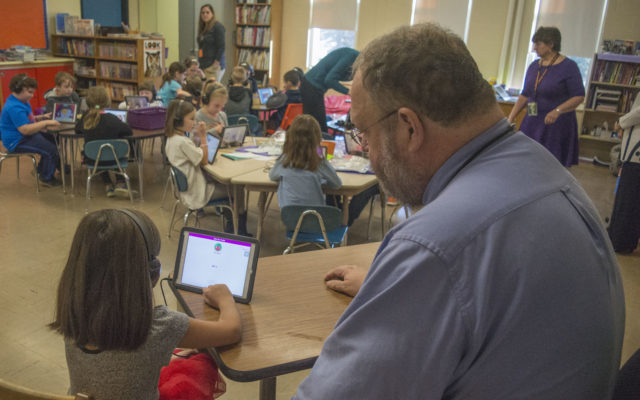 So far, the data indicates that the youngsters are improving their reading and comprehension, Reed said, “and now they’re getting excited about getting a 100 on a pretest so they can go onto the next quest and focus on another area they need to work on.”

In addition to inspiring excitement about learning, Reed said the integration of modern technology has “empowered” her students.

“Sometimes if I encounter a glitch, a student will say, ‘I know how to fix that.’ Some of them are actually teaching me,” she said. “When we first got the iPads, for example, I didn’t know how to change apps, and one of my students told me I need to press the home button.”

Jane McCall, assistant superintendent for RSU 39, agrees that the program is perfect for today’s younger students, as it incorporates technology they’re using at home on a regular basis.

“My main reaction is, ‘Why has it taken us so long to get this technology for younger students?’” McCall said, adding that she wishes this program could be available for all K-3 students within RSU 39.

“We’re very fortunate to have this available to Limestone Community School and we appreciate it,” she said. “We already see significant growth in their engagement. For the students of today, this is their world. They relate to it and they can maneuver technology much easier than people of our generation, which is something we need to support and encourage.”

RSU 39 Superintendent Tim Doak agreed that integrating technology into the curriculum has a positive impact on young minds. 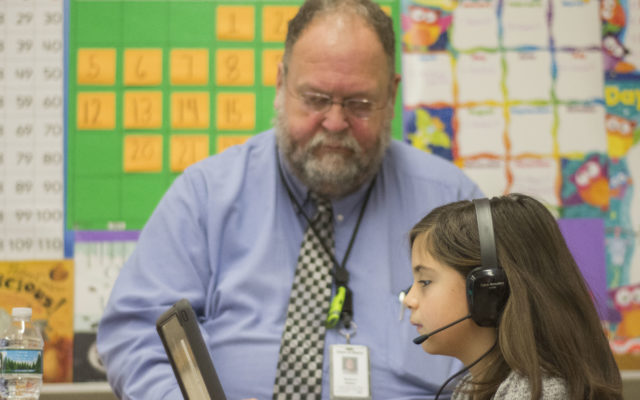 “When I think of literacy,” Doak said, “I think of reading, writing, listening, and thinking, and this hits all four categories. But the most important factor is when you add the creativity aspect with iPads, especially in lower grades. You set a good foundation for becoming a great reader and writer later on in life.”

“It wasn’t about surfing the web or reading books online,” Doak said. “It’s about instruction and individualizing that instruction with technology. You have diverse learners in all classes, and while it’s a little non-traditional to put devices in front of younger kids, research has shown that iPads are beneficial to their learning.”

Doak said that the Maine Department of Education is still measuring the pilot program’s effectiveness, but that student behavior has already improved since the project began. He added that he is hopeful the program will continue after the pilot ends in 2018, and he would like to see it expanded to include more schools.

“We need to prepare kids for where they’re going, not where we came from as adults,” Doak said. “Schools change because the students change, and when they change, we need to think about how to meet their needs.”

With the pilot still being in an early phase, Hassan said it’s too early to tell whether or not the state will expand the program to other schools, but he said the results so far are positive.

“We’re looking to support and tweak this pilot as we go along,” Hassan said. “We were able to get one to one (instead of two students to one iPad) for grades two and three, for example, which wasn’t in place when we started the pilot.”

The commissioner said it’s “too soon to tell” whether or not the program has significantly affected student achievement, but that he has already heard numerous reports from teachers that the program is helping with their instruction.

“[Teachers] are reporting that they believe their students are going to have a better experience with literacy,” Hassan said, “and that they will be able to demonstrate that they know more, and know it on a deeper level.”

For now, however, officials with the department of education are waiting until they have a more comprehensive understanding of the pilot program’s impact on young minds when the project ends next year.

“If the results are mostly positive,” Hassan said, “we’ll advocate for this being moved into other schools.”

I was mentioning to our board of directors this past week that I got a quarterly report from a large online retailer who will donate a portion of my purchases to a charity I select.
Campaign Corner END_OF_DOCUMENT_TOKEN_TO_BE_REPLACED