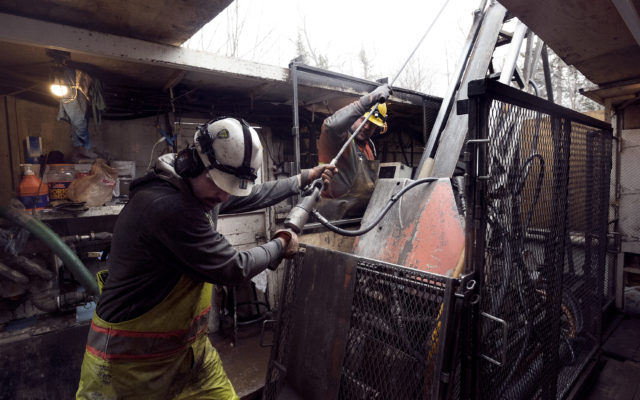 Mining company moving onto next phase of exploration

Anthony Brino • May 24, 2018
The Canadian mining company looking for economically valuable minerals in northern Penobscot County is moving onto a second phase of exploration that involves searching for additional metal deposits.

PATTEN, Maine — The Canadian mining company looking for economically valuable minerals in northern Penobscot County is moving onto a second phase of exploration that involves searching for additional metal deposits.

Don Hoy, CEO of Ontario-based Wolfden Resources, said the company’s first testing starting in late December was aimed at confirming the results of exploratory drilling from the late 1970s and early 1980s, when volcanic deposits of copper, lead, silver and gold were found by other companies who never pursued a mine.

“With the results in hand, basically there are no surprises,” Hoy said Wednesday. “What we’re seeing in our results are quite comparable to results from the 1980s.”

However, Hoy said it is still too early to determine whether the company will pursue a mine. 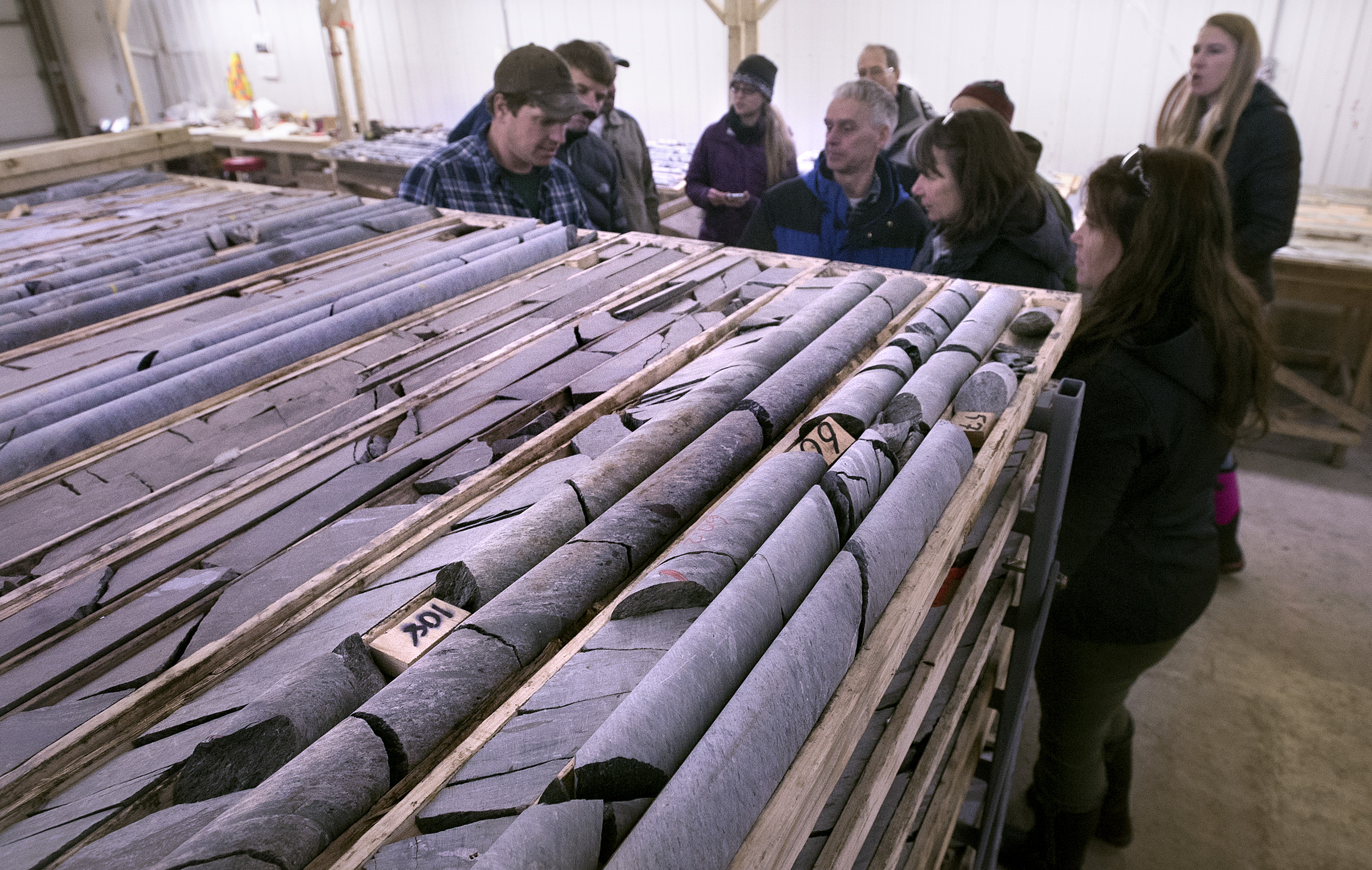 During a tour of drilling and processing facilities on March 7, representatives of various state agencies examine core samples collected by the Ontario-based Wolfden Resources Corp. north of Patten. The company began test drilling near Pickett Mountain in December and has collected about 10,000 feet of samples that will help researchers analyze the feasibility of opening a mine near Pickett Mountain in remote northern Penobscot County. They are primarily looking to mine zinc, but lesser amounts of copper, lead, silver and gold were also present in the deposits. (Gabor Degre | BDN)

Now, Hoy said, Wolfden is entering a second phase of exploration to search for additional volcanic deposits in and around Pickett Mountain, where the company owns a 6,870-acre tract of land.

“We’re going to continue to drill, but the focus is moving the surveys outward to see if we can extend the known deposits. These types of deposits tend to occur in clusters.”

Volcanic massive sulfide deposits often contain various metals and minerals that are mined for various uses in industrial and consumer products. The volcanic deposits are also known to be widely variable, with some containing high quantities of valuable metals and others containing lesser minerals such as pyrite, a low value metal also known as “fool’s gold.”

“With mineral exploration, you have to look at everything,” Hoy said. “You’re not really sure what’s below you or around you.”

This spring, a team of Wolfden staff and contractors have started doing ground-based geophysical surveys, using magnetic and electromagnetic technologies to scan below the ground for signs of substances, like metals, that show a magnetic pulse or electric conductivity. 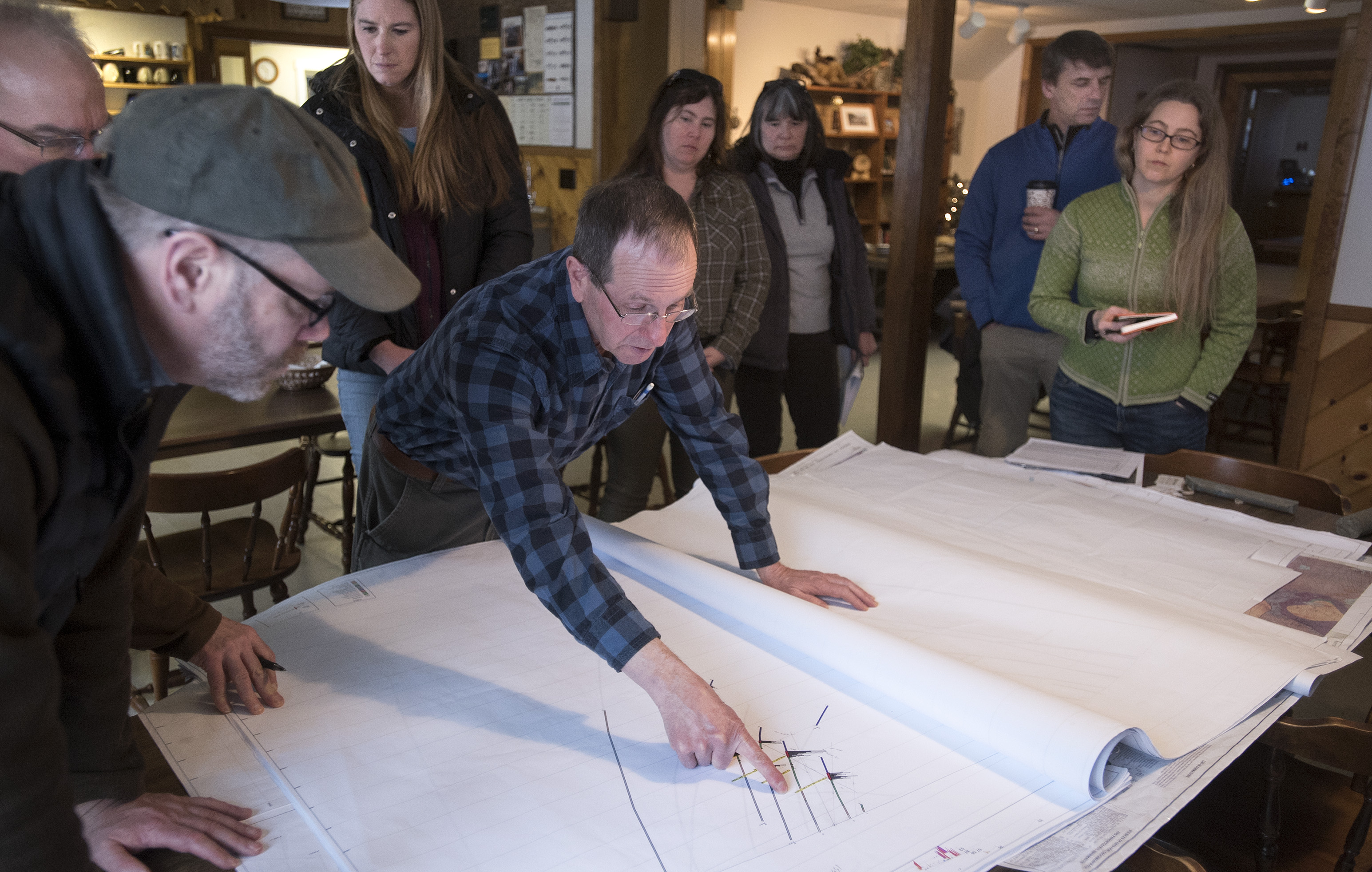 Arthur Hamilton (center) senior geologist with Ontario-based Wolfden Resources Corp. points out on a map locations where drill core samples are being collected by the company north of Patten. Representatives of the Maine Department of Environmental Protection and other agencies gather information during a tour of the area on March 7. The company began test drilling near Pickett Mountain in December and has collected about 10,000 feet of samples that will help researchers analyze the feasibility of opening a mine near Pickett Mountain. (Gabor Degre | BDN)

The company also has contracted with a company to perform aerial geophysical surveys, in which a helicopter flies over an area using similar technologies to try to detect subsurface metals.

“We’re hoping to start them in the next couple of days,” Hoy said of the aerial surveys. “If the weather stays good, they could probably complete the survey within 10 to 14 days.”

Hoy said the aerial surveys will be conducted over the company’s Pickett Mountain tract as well as adjacent parcels of commercial timberlands.

“If we get interesting results on land that [someone else owns], we’ll be speaking with them about cooperation” for further exploration, Hoy said.

In terms of pursuing a future mine at Pickett Mountain, “We’re still in the early days quite frankly,” Hoy said.

“We’re pleased with what we’re seeing so far. But it’s going to take a lot more work. I think one of the priorities for us is if we could find another deposit.”

A mine at Pickett Mountain would mark the first industrial metal mining in the state since the 1970s and the first under Maine’s 2017 mining law, which prohibits open pit mines and sets a framework for environmental and financial protections.

Recently we took in a cat named Joe. He is a very sweet cat with a multitude of problems. He was rescued from the streets here in town, but Joe turned out to be a very sick kitty and was surrendered to The Ark because the resources were not there to help him.
What's Happening This Week END_OF_DOCUMENT_TOKEN_TO_BE_REPLACED