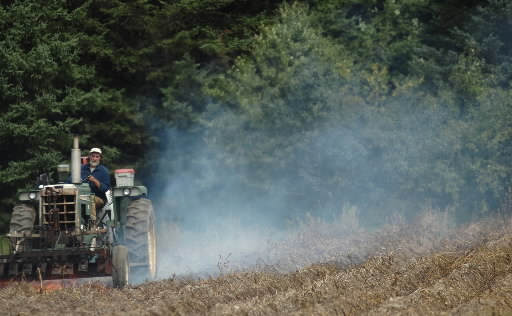 Darren Fishell • May 30, 2018
The Aroostook County organic potato farmer who landed in the national spotlight for his advocacy against one of the world’s biggest agriculture conglomerates has filed with his wife for personal bankruptcy protection.

The Aroostook County organic potato farmer who landed in the national spotlight for his advocacy against one of the world’s biggest agriculture conglomerates has filed with his wife for personal bankruptcy protection.

Megan and Jim Gerritsen filed for Chapter 7 bankruptcy protection in March, almost two years after selling their Wood Prairie Family Farm in Bridgewater to their son. They listed more than $460,000 in debt.

Almost half of that amount is due to the U.S. Department of Agriculture, against which Jim Gerritsen helped lead an unsuccessful court battle over the integrity of the department’s organic certification program. Credit card companies make up the bulk of the other debts listed.

Jim Gerritsen said crop losses due to wet conditions in 2011 and 2013 precipitated their financial troubles.

“This is agriculture,” Gerritsen said. “It’s marginal when things go right, and when you get two crop disasters, you know, it’s what happens.”

The County is pleased to feature content from our sister company, Bangor Daily News. To read the rest of “Maine organic farming icons file for bankruptcy,” an article by contributing Bangor Daily News staff writer Darren Fishell, please follow this link to the BDN online.

Only one member of Maine’s congressional delegation had come out in favor of impeaching President Donald Trump ahead of House Speaker Nancy Pelosi’s Tuesday announcement that the Democratic-led House of Representatives would begin an impeachment inquiry.
Pets END_OF_DOCUMENT_TOKEN_TO_BE_REPLACED

We think a cat can make for the best pet in the world. To truly love a cat, you must learn to accept them for what they are -- unpredictable and quirky, which is something unique and unlike any other pet.
Campaign Corner END_OF_DOCUMENT_TOKEN_TO_BE_REPLACED