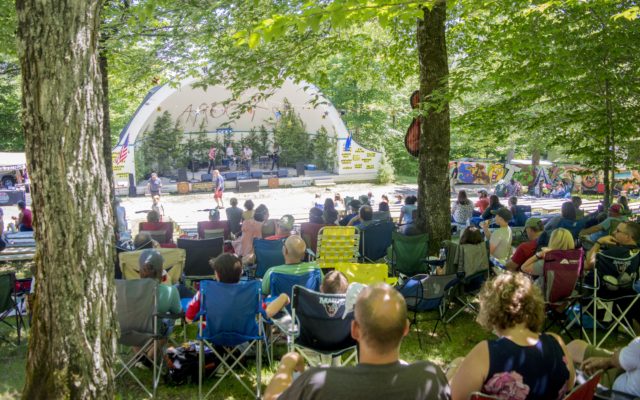 Chris Bouchard • July 11, 2018
Music fans from across The County and beyond flocked Saturday to the all day Arootsakoostik festival to enjoy more than eight hours of entertainment

NEW SWEDEN, Maine — Music fans from across The County and beyond flocked Saturday to the all day Arootsakoostik festival to enjoy more than eight hours of entertainment as a variety of musicians played in an arboreal amphitheater under a nearly cloudless sky at Thomas Park.

“It’s a great opportunity for everyone around here to go to something like this,” said Rebecca Collins. “You hear about big festivals on the news and radio, and it’s nice to experience a local version of that.”

Her mother Sharron Collins said she will spread the word next year and let everyone know about their positive experience.

“Since it was our first year,” Sharron Collins said, “we didn’t know what to expect. But we’ll definitely put the word out that this is a great festival; it’s great for families, too.”

Festival organizer Travis Cyr opened the noon to 9 p.m. festival with a short set while accompanied by the Stay Glad band. 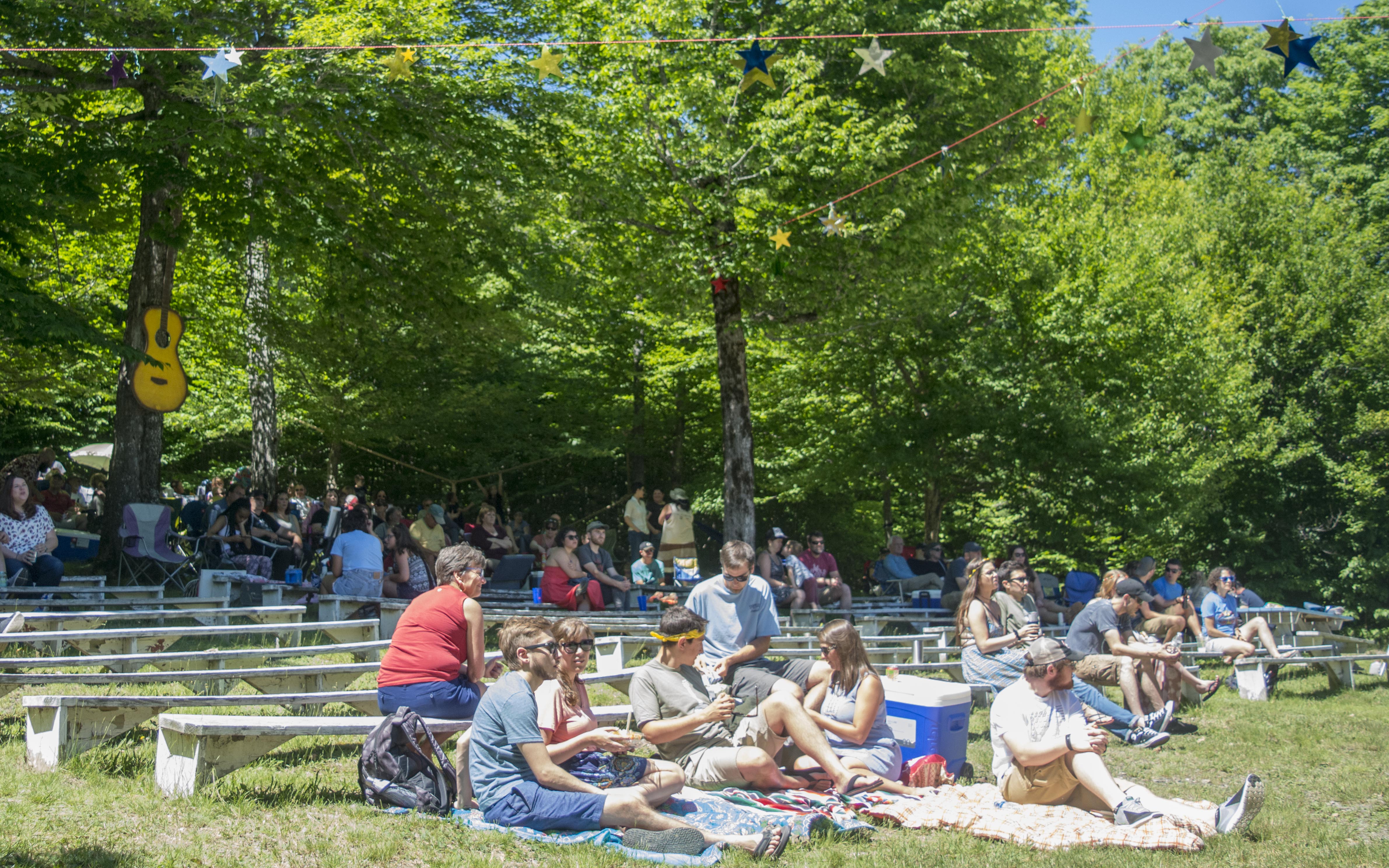 Hundreds attended the 2018 Arootsakoostik music festival, with many guests opting to sit in lawn chairs or on towels as opposed to the benches in Thomas Park.
(Christopher Bouchard)

He was followed by El Malo, The Rugged, Sybilline (formerly known as Hannah Daman and the Martel Sisters), Tricky Britches, The Mallett Brothers, The Ghost of Paul Revere, and the Toughcats.

Most bands had members available after their sets to sell music and merchandise, and a variety of vendors set up shop throughout the park, offering numerous refreshments including brick oven pizzas, lobster rolls, ice cream, fried food, and blueberry popsicles.

Cyr said it’s tough to simultaneously perform at and organize a music festival, adding that “it went incredibly well as far as I’m concerned.”

As far as the weather was concerned, Cyr said that following the high temperatures in the 90s on Wednesday and Thursday,  he “couldn’t ask for better … It’s perfect.” 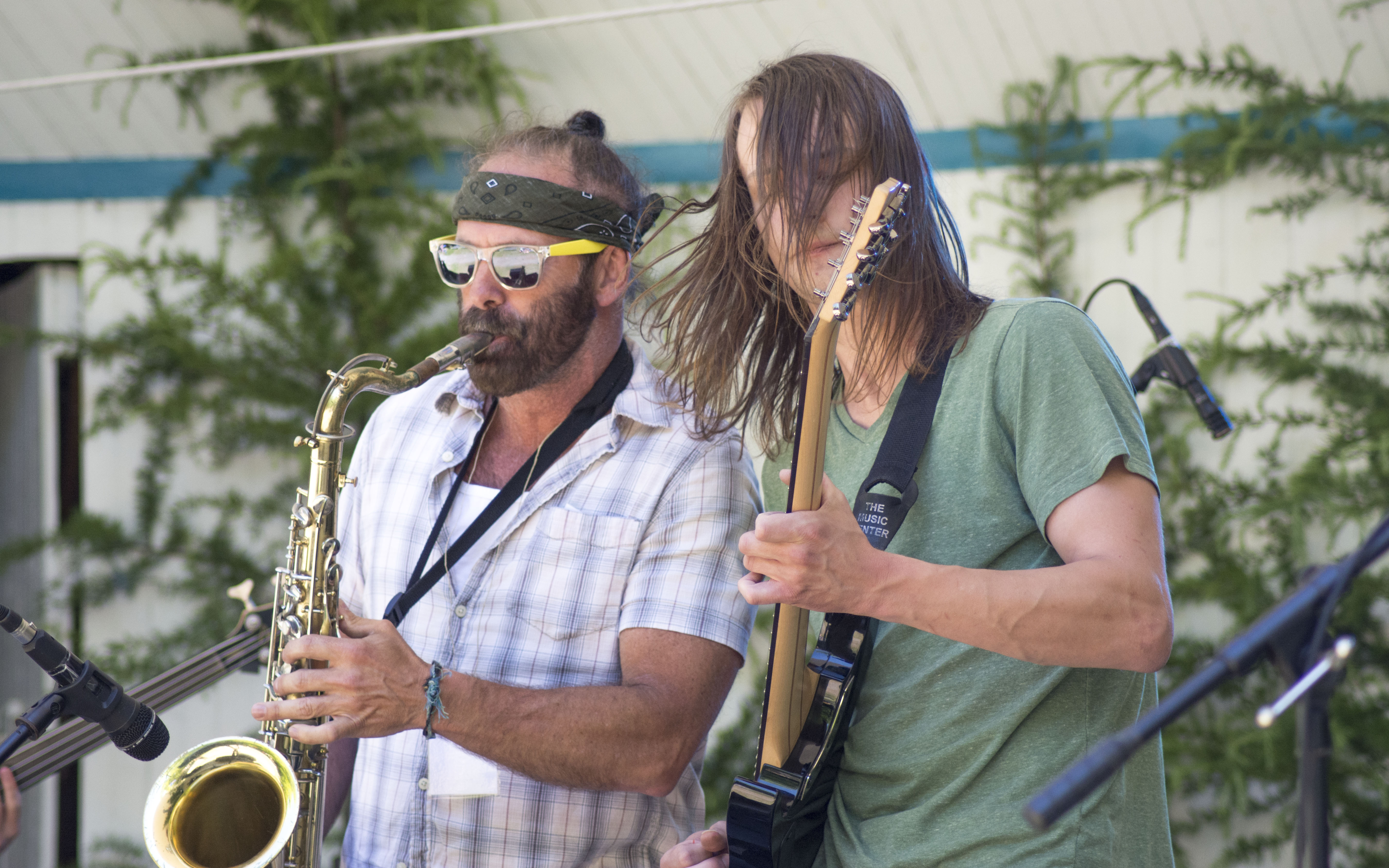 After running a show every year for a decade, Cyr took a year off from Arootsakoostik in 2017 and said this spring that he “really missed it,” and heard the same from longtime fans of the show.

“From the initial idea of bringing it back, to booking the bands, to support from everyone involved up until this very point, everything has gone incredibly smooth and it’s encouraging,” Cyr said Saturday.

Arootsakoostik wouldn’t be possible without help from sponsors, volunteers, and even members of Cyr’s family.

Danielle Cyr, his sister-in-law, has sold tickets at the gate for three of the festivals.

“It’s great to see people,” she said Saturday. “We’re excited to see them come for beautiful weather and good music.”

If the festival had been held on Thursday, a day when several areas of the County endured record breaking heat, she said, “we’d be hurting a little bit.”

“The turnout is a little bit lower than we maybe expected in the past,” she said two hours into the festival, “but a lot of people are carpooling and there’s a lot going on today locally,” adding that organizers usually see a steady stream of guests until about 4 p.m..

The gatekeepers aren’t stuck to their posts either, and Danielle said they usually take turns in order to enjoy bands, adding that she was looking forward to seeing Tricky Britches and The Mallett Brothers that afternoon. 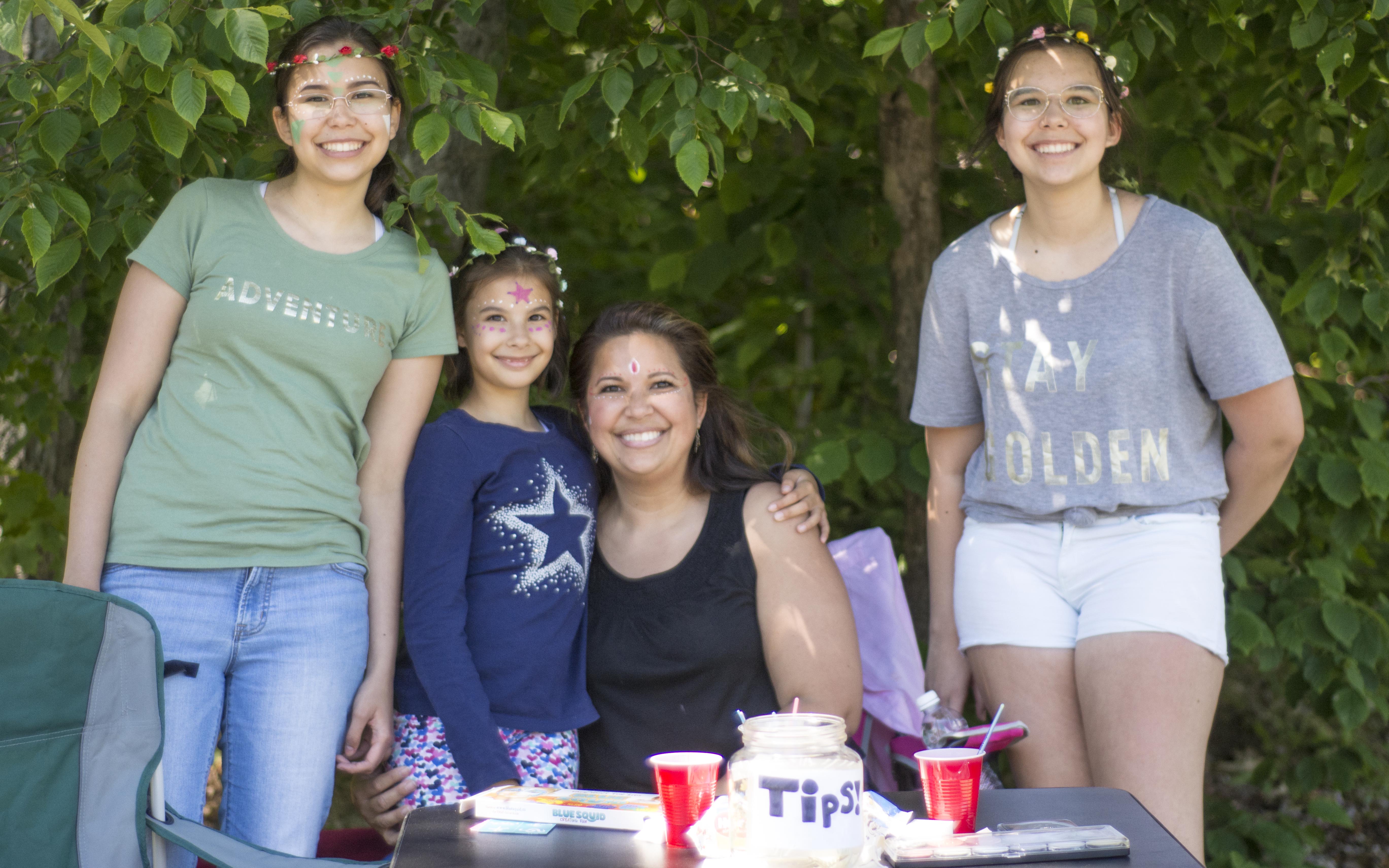 The Collins family, from left, Rebecca, Abby, Sharron, and Ellie, attended Arootsakoostik for the first time this year, and offered to paint the faces of concert-goers at Thomas Park in New Sweden.
(Christopher Bouchard)

Even during its 11th iteration, Arootsakoostik still attracted newcomers such as Sharron Collins and her daughters, who offered face painting to guests.

Sharron Collins said they found out about Arootsakoostik through Facebook, and decided to participate.

“They put out a feeler for people wanting to do face painting,” she said, “and my girls are very artistic so I said, ‘Sure.’”

Her daughter Rebecca said the weather was “absolutely perfect,” adding that the “breeze keeps things cool,” and, overall that Saturday is “so much better than it was” earlier in the week.

“We do a lot of art,” Rebecca Collins said, “but not usually face painting. It was definitely a fun thing to do, and not as hard as I thought.”

The family unanimously agreed that they would “absolutely” come back next year.

It’s too early for Travis Cyr to say if the festival will continue on a yearly or biennial basis, but he believes the future is bright for Arootsakoostik.

“It just feels so good to do this,” he said. “Whether it’s next year or every other year, everyone involved seems to be signed on for Aroots 2.0, so I’d say the future is definitely optimistic.”

He added that he was thankful to everyone who came out to support the festival.

“We’re so happy to be back and we just feel fortunate to be able to do this,” Cyr said. “Thanks to everybody for the support, and for allowing us to do it.”

For all it does to refresh us, burn energy and keep us sharp, we all need playtime, dogs and cats included. Sharing playtime with pets has the added benefit of strengthening the bond between us, so we better understand one another.
Campaign Corner END_OF_DOCUMENT_TOKEN_TO_BE_REPLACED