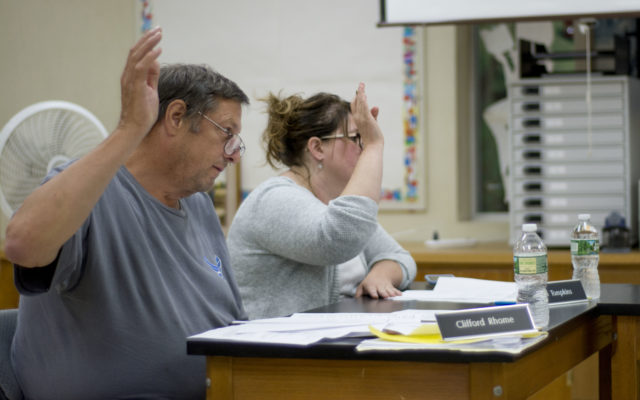 Chris Bouchard • August 2, 2018
RSU 39 board members approved a referendum question on Aug. 1 seeking to have area voters accept an additional $4.8 million in state funding for the new school that will serve students from Caribou, Limestone, and Stockholm.

CARIBOU, Maine — RSU 39 board members approved a referendum question on Aug. 1 seeking to have area voters accept an additional $4.8 million in state funding for the new school that will serve students from Caribou, Limestone, and Stockholm.

The state approved the extra funding last month, after school officials only received one bid for the project and it was $12 million over budget. After weeks of negotiations with the contractor, Bowman Constructors of Newport, the architect, PDT Architects of Portland, and the state board of education, local administrators reached a deal in which the contractors agreed to lower the price and the state agreed to make up the difference in cost.

Doak said during an Aug. 1 school board meeting that while residents do need to vote to accept the money, all of the funding will come from the state rather than local taxpayers. If RSU 39 area voters do not approve the $4.8 million, Doak said that money would still be spent by the state, but on another school project elsewhere in the state.

“It’s not going to be taxed,” he said. “It’s state money. Maine wants RSU 39 to have this new school. If we don’t pass this referendum, we won’t get a biomass boiler [estimated to save the school district tens of thousands annually], kitchen appliances, furniture, or two sports fields.”

If the money is not approved by voters, taxpayers would not only end up paying more in energy costs, but also would need to fund the demolition of Teague Park Elementary School.

Doak added, for the sake of transparency, that the state would only pay for one wooden gym floor out of the two gymnasiums in the new facility. PDT Architects, however, found a dealer willing to sell two gym floors for $50,000 and private donors have reached out to school officials to pay $25,000 for the second floor. While this will need to be shown on the books as “an additional $25,000 cost to the local taxpayer,” Doak said that, because of the donors, it will not result in an additional expense.

Caribou Resident Bruce Hagelstein asked the board members if they had determined a name for the school and if they could place a sign on Bennett Drive in order to communicate to the community that construction is underway.

Board members indicated that a name had not yet been determined and Doak said the reason a sign had not been placed on the site is because it is the contractor’s responsibility to take care of signage. However, both Doak and RSU 39 Board Chairperson Tanya Sleeper told Hagelstein that they would communicate his concerns to the contractor.

Halfway Home Pet Rescue in Caribou has partnered with the Houlton Humane Society shelter for a cat spay and neuter clinic on Saturday, May 30, and Sunday, May 31, in Houlton.
Campaign Corner END_OF_DOCUMENT_TOKEN_TO_BE_REPLACED