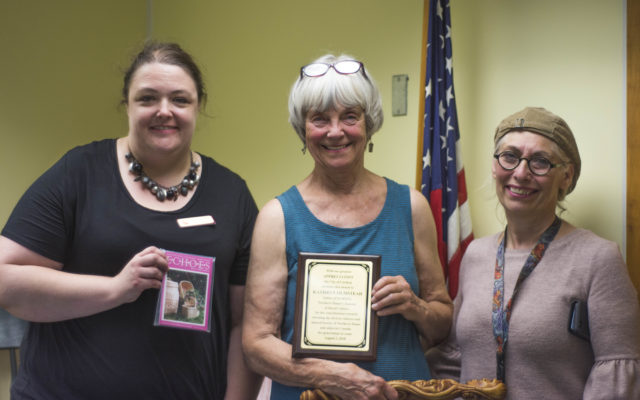 Chris Bouchard • August 6, 2018
Writers and contributors of Echoes Magazine, a northern Maine publication that ended its nearly three decade run just last year, shared the stories behind their stories during an Aug. 3 panel held as part of Caribou Days at the Caribou Public Library.

CARIBOU, Maine — Writers and contributors of Echoes Magazine, a northern Maine publication that ended its nearly three decade run just last year, shared the stories behind their stories during an Aug. 3 panel held as part of Caribou Days at the Caribou Public Library.

Long time Echoes contributor Dan Ennis of Tobique, New Brunswick, initiated the panel by honoring Wabanaki tradition, beginning and ending with a song to call in the spirits. Speakers and guests, who were seated in a circle, and took turns holding a “talking stick” when speaking, which provided them with the undivided and uninterrupted attention of other guests.

Ennis began by explaining that while his Christian name is “Dan Ennis,” his spirit name translates to “Medicine Voice.”

“I’m here to help in any way that I can, and to listen,” he said. “We do this circle every Monday, and people believe that thoughts are powerful, words are powerful, and the circle is powerful. The circle is good for the people who are participating here. The ceremony provides strong healing energy and through the circle we share our words, prayers and thoughts.”

Before passing the talking stick to Theresa Madigan of Caribou, he explained that guests are to say “all my relations” when they are finished speaking.

Madigan, whose story was shared in Echoes Magazine and as a County Face feature, spoke of her time assisting military families during World War II when she was only 9 years old.

Her father was an assistant postmaster at the Caribou Post Office, and Madigan said she was inspired to help when he came home and explained that Joe Habeeb was a prisoner of war in Germany, and that this was discovered by a colleague who heard Habeeb’s name announced via shortwave radio.

“I thought I’d try to get that broadcast,” she said, “so I tinkered with the radio and found it. There was a German lady, who spoke perfect English, who announced the names of prisoners. I would sit there and copy down the names, and must have sent hundreds of letters out to their families letting them know their sons were alive and well in POW camps.”

In return, Madigan said she received 271 letters from parents, thanking her for letting them know their child was safe.

Echoes contributor Jean Cobb talked about the inspiration for a couple of articles related to her move from the Sebago Lake area of southern Maine to Aroostook County, and the differences she found as a resident of both regions.

“My husband and I had a Volkswagen camper in 1971, and we would come up here as well as other places,” she said, adding that she grew up in Standish, a rural small town, and that she preferred smaller communities.

“I was really impressed with the rural nature up here, and also the sense of community,” Cobb continued. “So I decided I would move up here. So that’s what I did; I sold my house and looked up here. It’s not easy finding a house 350 miles away from you, but I did.”

Cobb said that many of her southern Maine friends would ask, “Why would you move up there?”

“They said, ‘You don’t know how bad it is in the winter because you’ve only been there in the summer,’ but I didn’t think it was that much different,” she said. “So I rented a couple places in the winter and also rented a place in St. Agatha on Long Lake in November.”

She concluded by saying that it’s “gorgeous” in the County, and while southern Maine is a beautiful place to live, “it’s a different kind of beauty.”

Donna Hurley shared the story of her friend Gwen Harmon, who published a book titled, “This I Remember,” dealing with her experiences growing up in Woodland during the Great Depression.

Hurley shared an anecdote from Harmon’s childhood in which they were traveling via horse during a snowstorm.

“Her sister Doris was a baby,” said Hurley, “and they would put her in a box on the sleigh wrapped up in blankets. On the way home, the wind made some big drifts and the sleigh turned over. They were stuck in the snowbank while the horse kept going with the baby, and they had to wade home. By then they were crying because they were afraid the barn door wasn’t open enough and worried that the sleigh may have gotten stuck with the baby, but when they got home the horse was safe in the barn with Doris.”

Echoes Magazine founder Kathryn Olmstead spoke about how her move to Westmanland in Aroostook County inspired her to learn more about the the Lebanese immigrants in the area.

“I thought, ‘What in the world would attract people from the Mediterranean to northern Maine?’ So I started asking questions,” she said, adding that she learned that one of the reasons was that there was an abundance of French speaking citizens.

“Lebanon had been a French protectorate,” she said, “and they spoke French in that part of Syria. Even though the people who came from Lebanon to northern Maine were speaking Parisian French, they were still able to get along.”

Another reason for the migration, Olmstead learned, was the County’s geography.

“Syria is a desert,” she said, “but Lebanon had rolling hills and farmland. At the time they immigrated, which was between 1870 and 1900, many farmers had cultivated olives, grapes, and dates, so when they landed in New York and heard about Maine, Aroostook must have felt more familiar compared to New York. The most important answer to my question was that they were seeking a better life and the way they found that was through peddling.”

Olmstead read an excerpt from one of her stories, in which she interviewed a number of Lebanese-American citizens who relayed stories about their relatives’ initial move to the United States.

“The Lebanese, as we all know, started a culinary tradition in Caribou,” she said. “ With Freme’s restaurant in Caribou, Mike’s Place, Yusef’s, and Green Acres.”

After hearing her story, Caribou Public Library Director Anastasia Weigle and Caribou Marketing and Events Coordinator Christina Kane-Gibson surprised Olmstead with a plaque honoring her work in the area.

“These stories are just the tip of the iceberg that this magazine has created,” said Weigle. “Echoes has traveled Maine, and we’ve asked the city to do something for you.”

Kane-Gibson added that the Echoes panel was incorporated as part of Heritage Day and combined with Caribou Days to help discuss the city’s heritage which is a “real passion” for her and Weigle.

“We’ve been digging through the archives and reading all your stories and would love to continue this tradition, to read more, hear more, and highlight more,” said Kane-Gibson. “This is a baby step in the direction of what we would like to do.” 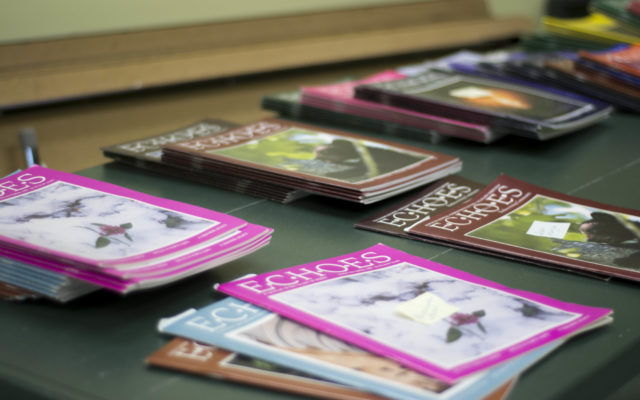 Dozens of issues of Echoes Magazine were on display at the Caribou Public Library during an Aug. 3 panel in which writers and contributors of the magazine told the stories behind their stories as part of the city’s three-day long Caribou Days celebration. (Christopher Bouchard)

Halfway Home Pet Rescue in Caribou has partnered with the Houlton Humane Society shelter for a cat spay and neuter clinic on Saturday, May 30, and Sunday, May 31, in Houlton.
Campaign Corner END_OF_DOCUMENT_TOKEN_TO_BE_REPLACED