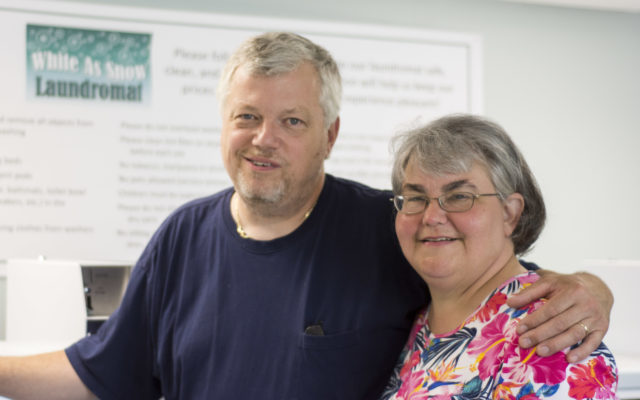 Chris Bouchard • August 12, 2018
Brian and Julie Weston of Limestone opened a laundromat next to their redemption business, “Eagles’ Redemption,” in early July.

LIMESTONE, Maine — Brian and Julie Weston of Limestone opened a laundromat next to their redemption business, “Eagles’ Redemption,” in early July.

The two businesses are located below their non-profit coffee shop, “Manaus Books & Coffee Shop,” in the former masonic building on Main Street.

The couple said they decided to open a laundromat based not on what the community wants, but what it needs, as it provides a facility within walking distance of many residents living in nearby apartments. The alternative before was for area residents to drive to a neighboring community.

Now, residents can return bottles downstairs and get a coffee or buy a book upstairs while waiting for their clothes to wash.

The facility contains five washers and dryers. The washers have a 20 pound capacity and Julie said it is not recommended to wash big blankets or comforters in the machines.

“The need was for a place to do laundry,” Julie said, “and there are other places that have larger machines, but we wanted to keep it small here.”

Since the facility is unmanned and unattended, it is equipped with three security cameras inside and one outside.

“People are taking care of the place and I’m impressed with it,” said Brian. “We haven’t found any kind of abuse, but if people play with the money machine for example we might need [to look at the camera footage].

The camera also “cover us if someone says something and the camera footage doesn’t match up,” he said. “I hate to think like that, though, and so far it’s been really good.”

The Westons said the rules for the facility are fairly simple and common sense: empty all pockets before washing clothes, don’t put rubber or horse blankets in the machines, make sure kids don’t get on the folding tables, and so forth.

Brian said that while there is room for expansion, they will likely keep the facility at its current size “unless this thing really gets rocking and rolling.”

In addition to the coffee shop, redemption center, and laundromat, the Westons also own “Manaus Books,” a business through which they sell books and Brodart book covers.

For the Westons, an average day begins early and ends late, with Brian getting up early and opening at 6 a.m., and Julie getting up later to make breakfast and coffee.

At 7:30 a.m., they sit on the front deck of their 10,000- square-foot building, overlooking Main Street, and enjoy a coffee together.

“We always spend time in the morning having coffee,” said Julie. “It’s good for your marriage.”

Julie will man the redemption center from its 8 a.m. opening until about 10-10:30 a.m., at which point manager Frank Beil takes over until about 2:30 p.m. During this time, Brian is either picking up bottles from businesses and clients both in and around Limestone or taking care of orders for their online business.

Julie takes care of administrative duties during this time such as correspondence with customers or promotional material online, and also helps with orders.

Orders for Manaus books need to be dropped off at the Limestone post office by 2:30 p.m. every day, and Brian said they ship out between 35 to 75 orders a day, which can result in a crunch depending on the amount of activity with their other businesses.

“The day kind of climaxes at that point,” he said, adding that they typically take a quick break once orders are shipped.

Julie then goes back to managing the redemption from the time Beil leaves until it closes at 5 p.m.

“Then I get to make dinner,” she said.

“And then you’re off to meetings in town on Wednesdays,” said Brian, adding that after closing they will sometimes handle orders for the following day or take inventory of their earnings or containers.

The laundromat provides the Westons with another income stream to handle expenses related to the upkeep of the building, while allowing them to continue managing their other businesses.

At this point, they both said it is not likely that they will be pursuing additional business ventures any time soon.

“It’s amazing what your body can do,” said Brian, “but we’re finding our limit.”

“It’s not just the physical aspect,” said Julie, “but mentally you can only take in so much, otherwise you lose focus. It’s exhausting always being on and thinking about the next thing; I think I’ve reached my limit.”

They added, however, that they do have plans in store for the coffee shop, and that they may start hosting events at the space on a more regular basis and for special occasions such as New Year’s Eve.

Just when we thought we were out of the woods with kitten season, it has hit full force.  The past few days have been difficult answering the phone and hearing the stories of why people have litters of kittens they need to surrender.
Campaign Corner END_OF_DOCUMENT_TOKEN_TO_BE_REPLACED