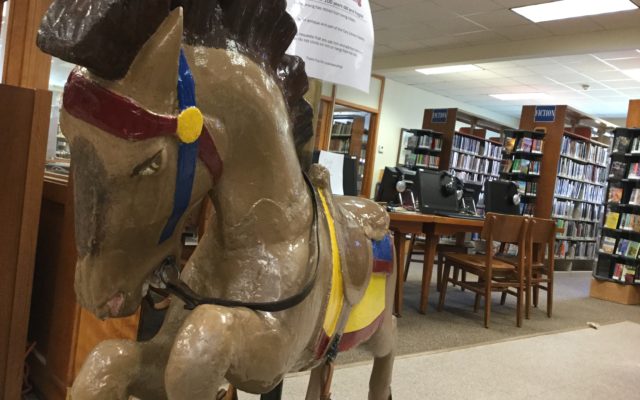 Jen Lynds • August 24, 2018
Although the memories of it are a bit vague in her mind, Heather Foster of Houlton can still remember a time when she was able to take a ride on the carousel horse that greeted visitors upon entrance to the Cary Library in Houlton.

HOULTON, Maine — Although the memories of it are a bit vague in her mind, Heather Foster of Houlton can still remember a time when she was able to take a ride on the carousel horse that greeted visitors upon entrance to the Cary Library in Houlton.

“That was the greatest part of visiting the library when I was a kid,” the 43-year-old said Monday. “My mother always made a deal with me. She wanted my siblings and I to participate in the summer reading program that they always have at the library, and if we went and picked out three books and read them and did good on our book reports to the library staff that week, she would let each of us ride the carousel horse before we went home.”

Since 1969, “Boomerang” the antique Spillman merry-go-round horse that was purchased from New Mexico, has felt the weight of countless children on his saddle as they have grown and aged out of the children’s section of the library. The all-wood horse has been forced into retirement, with wear and tear and a lack of available repair services factoring into the decision, Librarian Linda Faucher said on Monday.

“I can’t remember exactly, but it was just within the last year I believe that we had to put up the sign saying that people couldn’t ride him anymore, they could only pet him,” she said. “That is because his back legs and tail broke pretty often, and the person who frequently repaired the horse for us moved out of state. We didn’t want to risk further damage, so we had to make that decision.”

Although Faucher has records indicating that the carousel horse was purchased in the spring of 1969, she is not sure the true age of Boomerang. She doesn’t know how long it existed as a merry-go-round piece before it was purchased by the library.

She does know that there was interest in purchasing a carousel horse that was holding its head up higher so that it could look towards the children more. By the time negotiations were finalized, however, such a horse wasn’t available.

Boomerang was purchased through private donations and completely restored by Mr. and Mrs. L.D. Young Jr. In Nov. 1969. In August of that year, staff at the library had moved into a new $180,000 addition that had been constructed to enlarge the facility. The library held a special contest during National Children’s Book Week to name the horse. More than 1,100 children participated in the contest, and the winning name was submitted by Robert Snell, who was then a first grade pupil at the now shuttered Fair Street School in Houlton. Lois Vose and Cora Hogan of Houlton both served as judges for the contest.

Kathy Henderson, a former Houlton resident who now lives in Boston, Massachusetts, also recalled memories of the carousel horse on Monday. Henderson said that one of her favorite things to do with her siblings was to visit the library and ride the horse “after story hour.”

“I visit my family there often, but I haven’t been back to the library for years,” she said. “I had no idea that the horse wasn’t in operation any more. I wish it could still be ridden because I have a lot of good memories there, but I also see the value in preserving it as a monument to the past. I know I am not the only one who enjoyed that. It is a little piece of a lot of childhoods.”

Maine is more than eight months into Medicaid expansion under the federal Affordable Care Act and trends around who is enrolling and where they live are starting to emerge, bucking some expectations and pointing out access challenges.
Pets END_OF_DOCUMENT_TOKEN_TO_BE_REPLACED