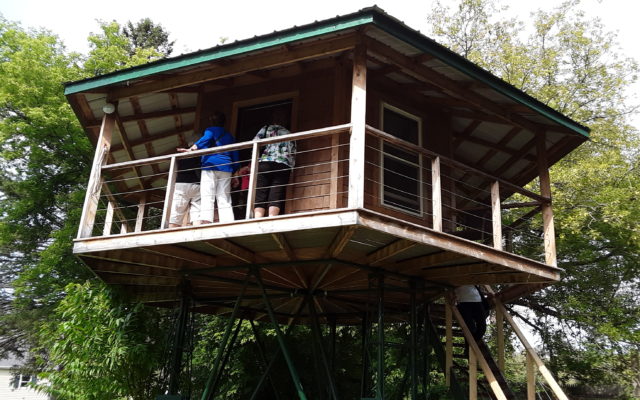 Melissa Lizotte • August 29, 2018
Many backyards in Presque Isle and Fort Fairfield were filled Saturday with eager visitors who explored the colorful and unique hidden gems that local residents had to offer.

PRESQUE ISLE and FORT FAIRFIELD, Maine — Many backyards in Presque Isle and Fort Fairfield were filled Saturday with eager visitors who explored the colorful and unique hidden gems that local residents had to offer.

The University of Maine at Presque Isle’s Foundation Board hosted its first-ever Backyard Getaway Tour, which included stops at seven homes in both communities that featured everything from decorated garden houses to an early 1900s-era peony house to a high-standing treehouse.

Though all the seats aboard the main mode of transportation — the Presque Isle Historical Society’s “Molly the Trolley” — were sold out with nearly 30 people crowding the seats, many others followed in their cars for their chance to check out some of Aroostook County’s most creative backyard hideaways.

The first stop was Edie Greiner’s “teach samhraidh,” which is Irish for “summer house,” nestled behind her large backyard garden on Johnson Road in Presque Isle. The cozy gazebo, which was originally built in 1863, featured cushioned chairs and a table filled with photo books of Maine coastlines and landscapes as well as stained glass portraits, all of which had folks admiring its charm.

Many of the backyard getaways featured personal touches from the owners. In her garden house, for instance, Roberta Griffiths of Presque Isle included antique tools and equipment from the farm where she grew up in Fort Fairfield. Donna and CK Keegan, owners of Myrtle Tree Farm, welcomed guests into a cozy summer house that included wooden bookshelves and furniture that signaled a home away from home.

“This land was all potato fields when we moved here and probably a couple years after that we thought this would be a good place to have a garden,” Hunter said. “We didn’t think it would get this large, but we love every single thing that’s here.”

The peony house was built in 1904 and was originally used as living quarters for a hired hand of previous owners. In 1979, Hunter transformed the space into a gardener’s paradise complete with dried flowers, antique items and clothing, birds’ nests and an upstairs loft. Though the house was the yard’s main feature for Saturday’s tour, many visitors also wandered further to admire Hunter’s lush flowers and a large pond that she and her husband built in 1997.

Throughout the afternoon, visitors toured three more homes, including Scott and Llori Keirstead’s “backyard hideaway,” located in a stand of fir trees on the Caribou Road in Presque Isle. The couple turned the Amish shed into a cozy retreat with a flat screen TV, comfy furniture and Maine-based photographs on the wall. Claude and Marilyn Lamoreau’s log cabin stood nestled in the woods in back of their Pine Street home in Presque Isle and held many antiques such as a wood stove, plates and cookware hanging on the walls and even a game of Chinese checkers.

Among one of the final getaways was Rollie and Martha Wight’s treehouse at their Wilson Street home in Presque Isle. Four years ago when their children, now ages 12 and 15, wanted a treehouse, Rollie Wight got to work and created a backyard space that includes a small bed and couch, table and a desk. He built the free-standing treehouse on recycled 10-foot tall antenna tower parts, and included wooden stairs and a porch that wraps around the house.

“The concept started out small but got bigger over time,” Rollie Wight said.

The tour proved popular with all who attended, including Phyllis Howe of Presque Isle, who noted that she enjoyed admiring several of the homeowners’ vast gardens as much as she liked the backyard getaways.

“It’s fun to wander around and see what different people have come up with,” Howe said.

Adrienne Morang of Foxboro, Massachusetts, was visiting family in the Presque Isle area when she decided to attend the backyard tour.

“I’ve enjoyed all the homes we’ve seen. Everyone seems to have put their own unique spin on what they’ve done,” Morang said. “I would definitely come on this tour again.”

Due to the popularity of the tour, UMPI Foundation Board members noted that another event likely would be planned for next year.

The backyard getaway tour served as a fundraiser for the university’s new 2,400 square-foot greenhouse that aims to expand agricultural research and academic programming. As of March 2018, UMPI officials announced that they had $250,000 left to raise for the $495,000 project, for which construction is expected to be completed in time for the fall 2019 semester. 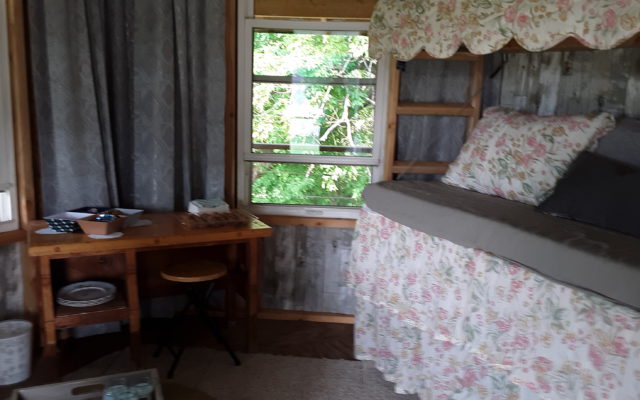 The cozy interior of the treehouse owned and built by Rollie Wright of Presque Isle features a small bed and couch as well as a table and desk. Wright built the treehouse for his children four years ago and this past Saturday the treehouse was featured in UMPI’s first-ever Backyard Getaway Tour. (Melissa Lizotte) 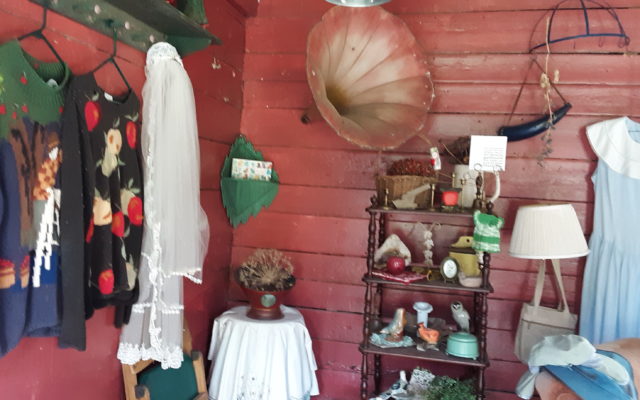 This peony house belongs to Margie Hunter of Fort Fairfield and features many items such as dried flowers, antique items and clothing, birds’ nests and even an upstairs loft. As part of Saturday’s Backyard Getaway Tour, Hunter led folks around the peony house as well as her five-acre flower garden and pond. (Melissa Lizotte) 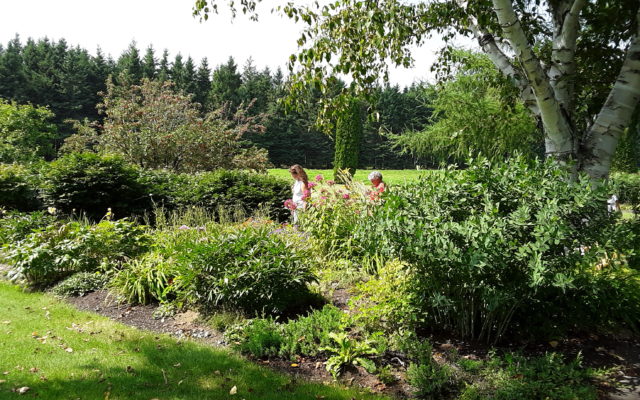 In addition to her original 1904 peony house, Margie Hunter’s flower gardens were a major attraction during the Backyard Getaway Tour, hosted by the University of Maine at Presque Isle’s Foundation Board on Saturday. (Melissa Lizotte) 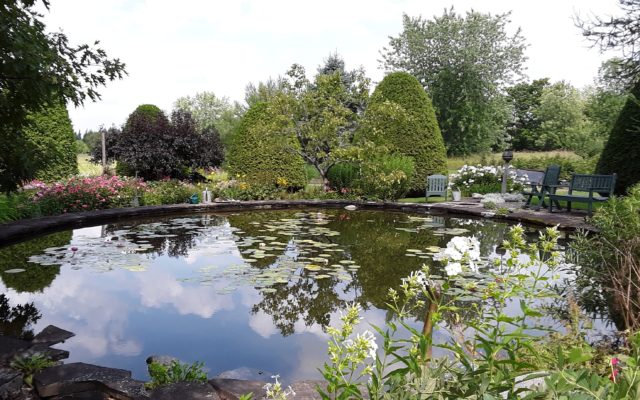 This pond is part of the 5-acre backyard flower garden of Margie Hunter of Fort Fairfield and was a popular spot for guests of UMPI’s first-ever Backyard Getaway Tour on Saturday. (Melissa Lizotte) 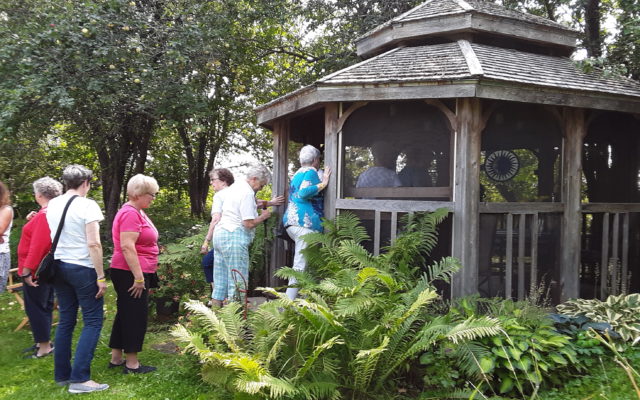 Edie Greiner’s “Teach Samhraidh,” which is Irish for “summer house,” was the first stop for folks on UMPI’s Backyard Getaway Tour held this past Saturday. The tour featured seven of Presque Isle and Fort Fairfield’s most creative backyard hideaways. (Melissa Lizotte) 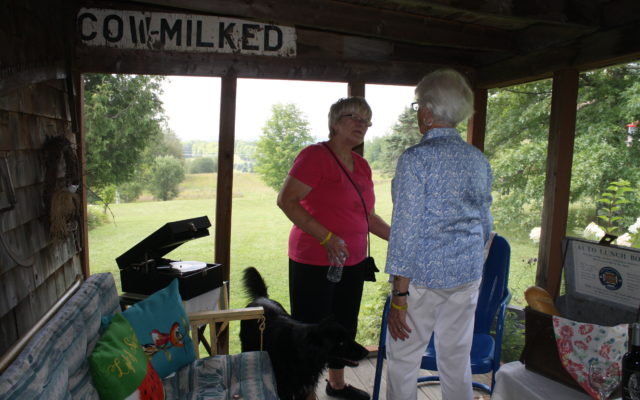 Only one member of Maine’s congressional delegation had come out in favor of impeaching President Donald Trump ahead of House Speaker Nancy Pelosi’s Tuesday announcement that the Democratic-led House of Representatives would begin an impeachment inquiry.
Pets END_OF_DOCUMENT_TOKEN_TO_BE_REPLACED