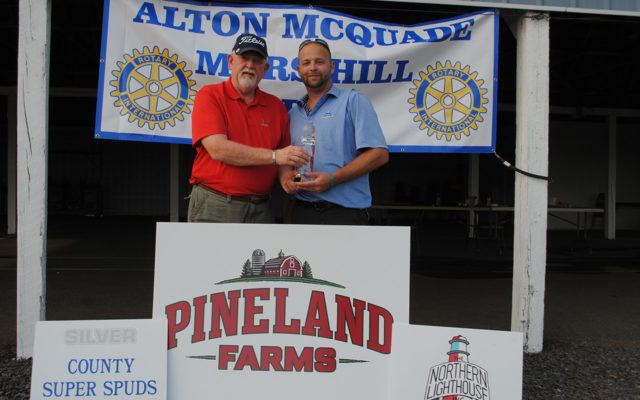 Kevin Sjoberg • August 30, 2018
The 16th annual Mars Hill Open Golf Tournament was held Aug. 18 and 19 at Mars Hill Country Club, with Tim Carlson of Hudson coming away with the title.

MARS HILL, Maine — The 16th annual Mars Hill Open Golf Tournament was held Aug. 18 and 19 at Mars Hill Country Club, with Tim Carlson of Hudson coming away with the title.

Carlson, who grew up in Mars Hill and now plays out of Penobscot Valley Country Club in Orono, shot a 4-under-par 140 over 36 holes to win low gross honors for the A Division. He followed up his round of 69 Saturday with a 71 the following day.

Taking second was Jamie Leavitt, who came in with a 149. Todd Newlands came in third, carding a 152 on the weekend.

Adam Orser took first on the net side with a 135. Brandon McLaughlin was the net runner-up with a 140 and Kyle Grooms placed third with a 144.

The longest drive winner was Leavitt and Randy Gifford took the closest to the line competition.

A few years back the Ark was gifted with something that we never dreamed possible. It is a gift that left us speechless and opened a whole new door for us.
Campaign Corner END_OF_DOCUMENT_TOKEN_TO_BE_REPLACED