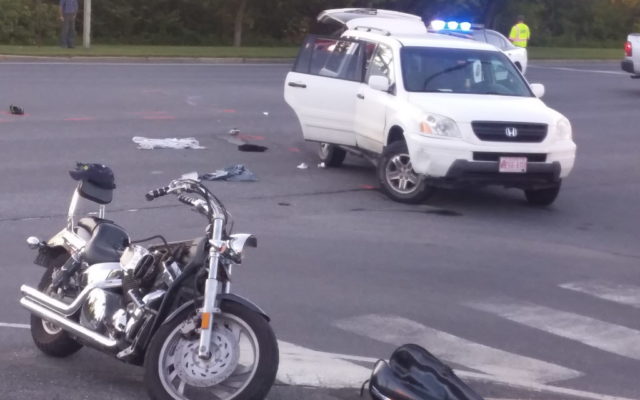 Chris Bouchard • September 1, 2018
Brad Frank, 37, of Caribou was flown to Eastern Maine Medical Center last night after sustaining serious injuries from a 6 p.m. crash on the corner of North and Main Street in Presque Isle.

PRESQUE ISLE, Maine — Brad Frank, 37, of Caribou suffered serious injuries in a 6 p.m. crash at the corner of North and Main streets at about 6 p.m. on Presque Isle Friday night and was flown to Eastern Maine Medical Center in Bangor for treatment.

Officer Kyle White of the Presque Isle Police Department investigated and said the crash occurred as Pauline Dionne, 47, of Presque Isle, who had been driving a 2005 Honda Pilot south on Main Street, turned left on North Street.

As the vehicle turned, Frank, who was heading north on Main Street on a 2006 Honda motorcycle, tried to stop and “skidded for approximately 30 feet before the operator laid it down on its side and slid into the passenger side of the pilot.”

No injuries were reported in the Honda Pilot, which also contained two children, however, Frank suffered serious injuries and rescue personnel with the Presque Isle Fire Department transported him to The Aroostook Medical Center. From there, he was flown to EMMC.

Police were assisted by members of the Presque Isle Fire Department, the Maine Warden Service, and the Maine Department of Transportation.

White is encouraging any witnesses to call the Presque Isle Police Department at (207) 764-4476 if they have any additional information about the incident.

Only one member of Maine’s congressional delegation had come out in favor of impeaching President Donald Trump ahead of House Speaker Nancy Pelosi’s Tuesday announcement that the Democratic-led House of Representatives would begin an impeachment inquiry.
Pets END_OF_DOCUMENT_TOKEN_TO_BE_REPLACED