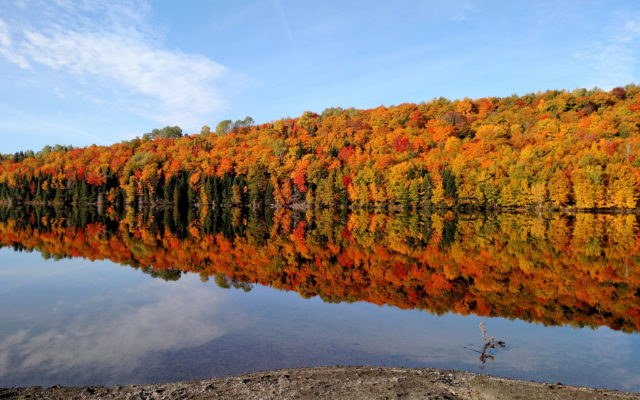 Maine’s fall foliage is popping up early this year

Aislinn Sarnacki • September 5, 2018
Some trees are displaying bright fall colors early in Maine this year, which may mean an extended fall foliage season.

Some trees are displaying bright fall colors early in Maine this year, which may mean an extended fall foliage season. These pops of color in late August are being attributed to the drought that has affected much of Maine this summer.

“What we’re seeing is some early fall coloration, and that’s due to the trees being under a bit of stress,” said Aaron Bergdahl, forest pathologist with the Maine Department of Agriculture, Conservation and Forestry. “Some species are going to be exhibiting some nice colors several weeks earlier than normal.”

However, not all trees in Maine’s millions of acres of forestland are affected equally by the drought, Bergdahl said. It’s trees by the roadside, along the edges of forests and in people’s yards that are most likely to dry out and tap out early due to exposure and shallower roots, ceasing their production of chlorophyll, the source of green in leaves.

“A lot of people are noticing it from the windows of their cars,” Bergdahl said. “They’ll see one maple already blazing red and orange and it’s striking. I’ve been getting some inquiries here at the office about it.”

Fall foliage season in Maine typically begins mid-September and lasts until mid-October, with slight variations every year, depending on weather. In addition, the leaves start to turn colors in northern Maine about a week before the southern reaches of the state. This pattern is fairly consistent from year to year, according to statewide fall foliage reports collected and compiled by the Maine Forest Service for nearly 60 years.

To read the rest of “Maine’s fall foliage is popping up early this year,” an article by contributing Bangor Daily News staff writer Aislinn Sarnacki, please follow this link to the BDN online.

Only one member of Maine’s congressional delegation had come out in favor of impeaching President Donald Trump ahead of House Speaker Nancy Pelosi’s Tuesday announcement that the Democratic-led House of Representatives would begin an impeachment inquiry.
Pets END_OF_DOCUMENT_TOKEN_TO_BE_REPLACED

We think a cat can make for the best pet in the world. To truly love a cat, you must learn to accept them for what they are -- unpredictable and quirky, which is something unique and unlike any other pet.
Campaign Corner END_OF_DOCUMENT_TOKEN_TO_BE_REPLACED