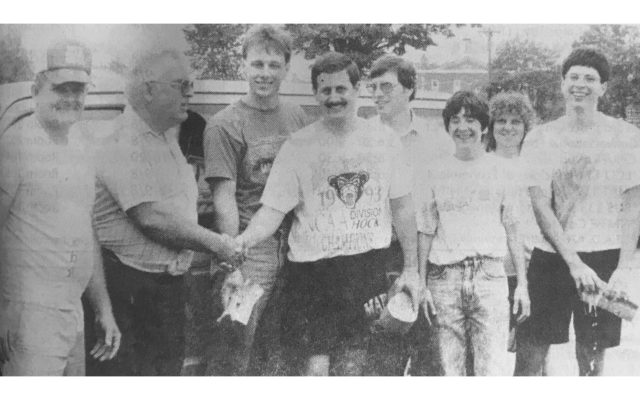 Contributed • September 6, 2018
100 Years Ago - Sept. 4, 1918 Attend a conference — Messrs. B. H. Brown and H. F. Lunt of the Buffalo Fertilizer Works left Saturday by auto for Boston, where they will attend a conference of fertilizer manufacturers, after which Mr. Lunt will go on to Buffalo for a visit to the head office.

Attend a conference — Messrs. B. H. Brown and H. F. Lunt of the Buffalo Fertilizer Works left Saturday by auto for Boston, where they will attend a conference of fertilizer manufacturers, after which Mr. Lunt will go on to Buffalo for a visit to the head office.

Contest winner — Fred Anderson, local agent for the Northwestern Mutual Life Insurance Company, was one of the winners among Maine agencies in the inter-agency contest and left this morning to meet with home office officials and representatives of the agency at the New Ocean House, Swampscott, Mass.

Prize winners — Three men stationed at the Houlton Air Force Base and one formerly located here were among the prize winners in five contests sponsored by the Tribune Publishing Company of Hyde Park, Mass., through their publication, New England Minute Man, which circulates among Army camps in the New England states. The only first prize winner was Sgt. James L. Ross, formerly of the Pioneer Times staff, whose essay ‘How to Win the Peace’ won an award of a $100 war bond. S/Sgt. G. J. Harman’s entry in a photographic contest won second prize of $75 in war bonds. S/Sgt. Joseph Stubenrauch was awarded a special prize of $50 for his poem, “Skies Free Forever.” Pvt. Ray Robinson, formerly stationed at Houlton, now in specialized training service, was second in the essay contest.

Attends car show — In September Chrysler-Plymouth dealers of Houlton will get their first look at the new lines of 1969 Plymouths, Chryslers and Imperials at a preview meeting in Boston. Glenn E. White, general manager of Chrysler-Plymouth Division, will head a panel of executives who will discuss the 1969 automobiles and promotional plans to continue the sales momentum which made 1968 a record year for the division.

Wished well — Richard Ivey was wished well by Houlton’s Superintendent William McDonnell and Principal David Wiggin during Ivey’s retirement party. Ivey iretired from maintenance at Houlton High School after 13 years. He was presented with a clock from SAD 29 with a plaque attached with employment dates.

Just when we thought we were out of the woods with kitten season, it has hit full force.  The past few days have been difficult answering the phone and hearing the stories of why people have litters of kittens they need to surrender.
Campaign Corner END_OF_DOCUMENT_TOKEN_TO_BE_REPLACED