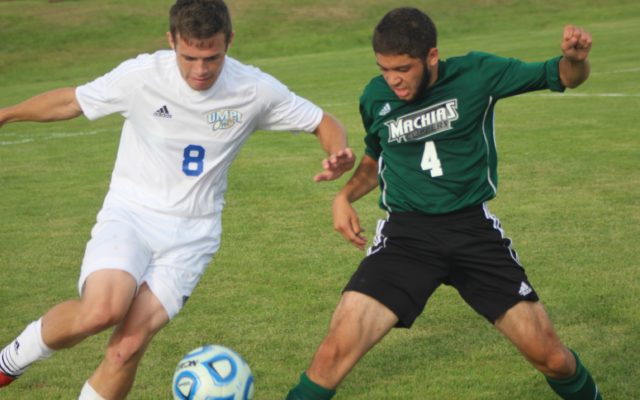 Kevin Sjoberg • September 11, 2018
The Owl soccer, volleyball and cross country teams had busy weekends as they continued their early-season schedules.

PRESQUE ISLE, Maine — The Owl soccer, volleyball and cross country teams had busy weekends as they continued their early-season schedules.

The Owls split a pair of soccer matches, losing to Fisher College Saturday, 3-1, before bouncing back Sunday to stop Hampshire College, 4-1. Andre Rossignol continued his high-scoring ways by tallying the lone goal against Fisher and picking up a hat trick in the win over Hampshire. Rossignol now has seven goals in UMPI’s last three contests.

Coach Alan Gordon’s UMPI squad carries a 3-2 record into the next match on Saturday against Northern Vermont-Johnson. The Owls then travel to Unity for another match Sunday.

The volleyball team lost all four of its matches against Brandeis and Gordon College Friday and UMass-Boston and Bowdoin Saturday. All four were played in Massachusetts and dropped the team’s record to 2-4.

Sophomore Miranda Washinawatock was a bright spot by leading the Owls in kills in all four matches, collecting 23. Devine Hoskie had a combined 16 digs in Saturday’s matches, while Laura Aroz had 35 assists on the weekend.

The Owls host Fisher College and the University of Maine at Machias Sunday, with matches at 10 a.m., noon and 2 p.m.

She helped the Owls to third place out of five teams. Irina Norkin took 10th in 22:48.3 and Emilia Churchill and Kendra Silvers were 16th and 17th overall, respectively, for UMPI.

The men’s team was led by Nino Manzella, who was 15th in 18:58.3. Kyle Davis of the Owls was 19th in 19:28, while Andrew Hunt and Hunter Dionne came in third and fourth for UMPI and made the top 25. The Owls took fifth place out of seven teams.

The teams next compete in Wenham, Massachusetts, Sept. 22 in a meet hosted by Gordon College.

Only one member of Maine’s congressional delegation had come out in favor of impeaching President Donald Trump ahead of House Speaker Nancy Pelosi’s Tuesday announcement that the Democratic-led House of Representatives would begin an impeachment inquiry.
Pets END_OF_DOCUMENT_TOKEN_TO_BE_REPLACED