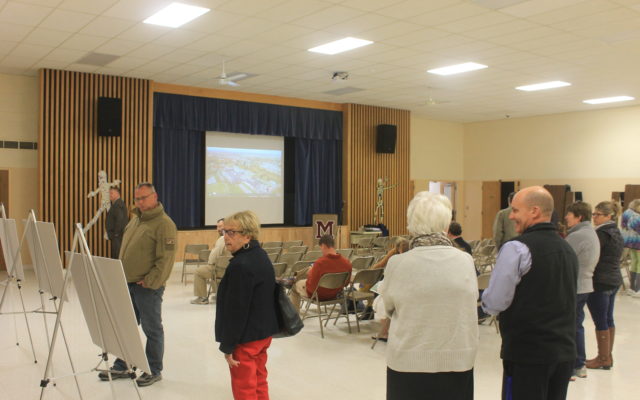 Anthony Brino • October 5, 2018
About 30 people attended MSAD 1’s first public hearing on the right-sizing bond proposal at Mapleton Elementary School Wednesday night, discussing the idea for a pre-K to 8 school and its impact on local taxes.

MAPLETON, Maine — About 30 people attended MSAD 1’s first public hearing on the right-sizing bond proposal at Mapleton Elementary School Wednesday night, discussing the idea for a pre-K to 8 school and its impact on local taxes.

Superintendent Brian Carpenter and Assistant Superintendent Clint Deschene spoke about the impetus for the $15 million proposal, which would close Pine Street and Zippel elementary schools and open a combined elementary and middle school at the current Skyway school.

Mapleton Elementary would not be affected by the project, with pre-kindergarten to fifth grade students from Castle Hill, Chapman and Mapleton continuing to attend that school until moving onto middle school.

“We are looking at providing a sustainable education system, which we cannot do in the current structure we have,” Carpenter said in his opening remarks. “This is going to reduce our tax burden in the future, even though it’s going to increase over the short-term. If we don’t do anything, your tax burden is going to grow.”

MSAD 1 operates on 11.35 mills of local property taxes, which is on track to rise 8 percent to 12.3 in 16 years with the current school footprint, according to Deschene. Moving into the renovated pre-K to 8 school would lead to a reduction in the mill rate by as much as 20 percent, to between 9.7 and 10.1 in the same time frame — after an initial period of it operating at 12.55 mills for up to five years.

The $15 million project “ends up saving this district $2.9 million over the next 15 years,” Deschene said.

Carpenter said that acting now is imperative because construction costs are increasing every year, while the maintenance needs at Pine and Zippel remain unaddressed.

“If you walk into any of our buildings, they look great. It’s the substructure,” he said.

Across the state, Maine schools are facing about $6 billion in deferred maintenance, such as multi-million dollar repairs to the Pine Street roof.

Fixing the roof and other systems at Pine Street could cost up to $4 million.

“We know back in the day, they used lead paint, they used asbestos. We know we have to fix the substructure to hold any new membrane we put on there,” the superintendent said.

Carpenter told the audience that district officials see the investment in the Pine Street roof as unwise, but if the right-sizing proposal fails, a bond for the roof project would likely be brought to voters in the coming years.

Attendees at the meeting asked questions about how the logistics of the new school and what the implications would be if the district waited another ten years for state funding for a new high school.

The $15 million price tag is raising concerns particularly among senior citizens on fixed incomes, said Patricia Sutherland, a long-time Chapman resident, state representative and chair of the town’s select board.

“I’m not hearing real positive kinds of support on this from people who I have talked with,” she said.

A few years back the Ark was gifted with something that we never dreamed possible. It is a gift that left us speechless and opened a whole new door for us.
Campaign Corner END_OF_DOCUMENT_TOKEN_TO_BE_REPLACED