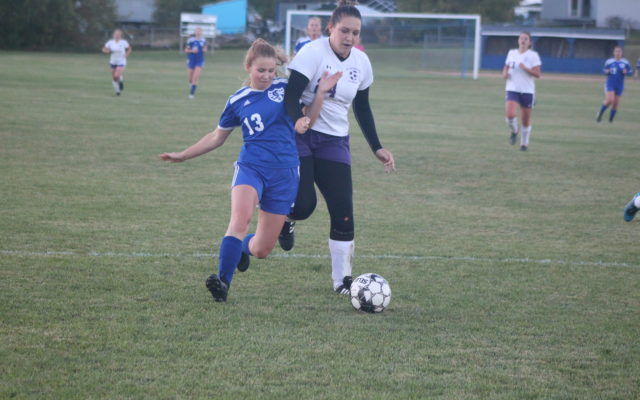 Kevin Sjoberg • October 8, 2018
It’s one thing to shift players around to positions on the soccer field they aren’t accustomed to, but it’s another for those players to embrace those new roles.

MARS HILL, Maine — It’s one thing to shift players around to positions on the soccer field they aren’t accustomed to, but it’s another for those players to embrace those new roles.

Such is the case with members of the Central Aroostook girls’ soccer team, who have taken these lineup changes and turned them into an 11-0 record and No. 1 ranking in the Class D North standings heading into the final week of the regular season. 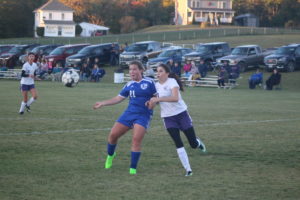 Liberty Fulton of Central Aroostook gets ready to field a crossing pass in front of the net during the match against Southern Aroostook in Mars Hill Sept. 28. Fulton is one of two freshmen in the starting lineup for the Panthers, which entered an Oct. 9 game against Ashland with an 11-0 record.
(Staff photo/Kevin Sjoberg)

The Panthers have never won a regional championship since the sport started up at the school in the 1980s, but seventh-year coach Joe Levesque said even with just one senior on the roster, the team has been able to put everything together from the very beginning of the season.

“I knew we’d have another strong team,” said Levesque, whose Panthers won 10 games last year but were eliminated in the quarterfinals, “but I also knew we’d have to make some changes in order to have the best chance for success.”

The biggest change has been shifting Libby Grass from the midfield and front line position back to sweeper. The sophomore has been brilliant, says Levesque.

“When [the ball] comes into her lane, it’s coming back out,” he said. “The move has really solidified our defense. We’re formidable against anyone we play.”

Another switch involved the team’s lone senior, Olivia Pelletier, who played defense her first three seasons before being moved to center midfield.

“Libby and I are both in new spots and it’s been a big adjustment,” Pelletier said, “but if you go in with an open mind and a good attitude, you can pick up the skills you need and that’s what happened with us.”

Levesque calls Pelletier “a leader in a lot of ways” and one who is not afraid to speak up.

“She really picks up the slack for us and when she’s on, the team is on,” he said.

The loss of Caitlyn Harris to graduation caused a huge void at the goalkeeper position, but freshman Olivia Blackstone has stepped in and the steady improvement has been immense.

“I honestly didn’t know what we were going to do, but she was willing and we’ve worked with her and her instincts have really come around,” Levesque said. “I’m really comfortable with her back there.”

Levesque said the team’s five juniors all play key roles and their ability “to take the next step” has been important in the excellent start. 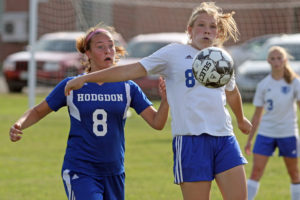 Central Aroostook’s Emma Patterson, right, uses her body to contain the ball as Hodgdon’s Sabra Scott defends during an August match in Hodgdon. The Panthers have been strong all season long and were undefeated through their first 11 games.
(Joseph Cyr)

Fullback Sydney Garrison is a top-flight defender and Breann Bradbury is a great athlete who is relentless in the midfield.

“She fights for everything,” Levesque said of Bradbury. “When you deal with her, you’re going to be in for a long day.”

Striker Kate Levesque is the No. 1 scoring threat and is in range of the school’s career goals mark while closing in on 100 over her first three seasons. The coach’s daughter improved her strength in the off-season and works on her game throughout the year.

Macey Coffin has been very good at the stopper position on defense and Kayla Martin is a steady playmaker who plays the left attacking midfield slot. She had the tie-breaking goal with four seconds to play in the team’s last game — a Sept. 28 home match against Southern Aroostook.

The sophomore group is also strong. Joining Grass as starters are Maddison Coffin, who plays left back, and Janelle Tweedie up front on the right wing.

Freshman Liberty Fulton is the other player in the starting lineup. She is a striker who is stellar with both feet and has a good sense of where the ball is going.

The first substitutes to play are freshman Mackenzie Blackstone as a forward wing and classmate Madison Howlett at midfield.

The Panthers play Ashland at home Oct. 9 and that game serves as a rematch of a 5-1 Panther victory way back on Aug. 23 in Ashland. They finish up with a road game against Easton Oct. 11 and a home contest against Hodgdon Oct. 12. The playoffs get going the following week.

“Everyone on our team is very talented and we’ve worked together really well,” Pelletier said of the regular season success to date. “We need to stay humble throughout the playoffs and just go in with a fresh start and if we keep doing what we’re doing, we will be fine.”

For all it does to refresh us, burn energy and keep us sharp, we all need playtime, dogs and cats included. Sharing playtime with pets has the added benefit of strengthening the bond between us, so we better understand one another.
Campaign Corner END_OF_DOCUMENT_TOKEN_TO_BE_REPLACED