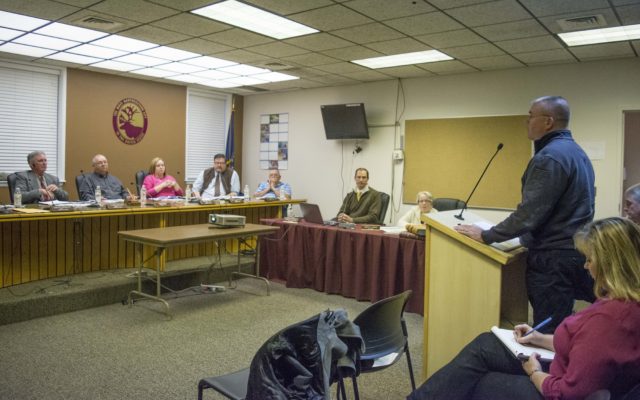 Chris Bouchard • October 31, 2018
Caribou city councilors held their first public budget forum of the year on Oct. 29, and while the initial proposal they viewed included a 5.7 percent increase, they ultimately agreed after nearly two hours of discussion not to bump up municipal expenses more than 3 percent.

CARIBOU, Maine –Caribou city councilors held their first public budget forum of the year on Oct. 29, and while the initial proposal they viewed included a 5.7 percent increase, they ultimately agreed after nearly two hours of discussion not to bump up municipal expenses more than 3 percent.

Caribou City Manager Dennis Marker introduced a drafted expense document to councilors, and said that even though it represented a 5.7 percent increase, many accounts, such as for the Nylander Museum and general government, “were looking at a potential reduction.”

The most significant change, however, involved requests for capital projects, which typically ranges between $700,000 and $800,000, but increased to $1.2 million in the drafted budget.

Some of these capital requests include $100,000 to match a grant for work on the Birdseye site; $102,000 for a new biomass boiler; money for new fire department equipment and the city information technology department, and funds to reconstruct Teague Park and for repairs to River Road and High Street.

Marker told councilors that the budget before them was “still very much a draft” and meant only for discussion purposes. Mayor David Martin said he would like to see the capital improvements “closer to what it has been” and that, as a general guideline, he wouldn’t like to see the overall budget increase by “more than three and a half percent.”

“You’re not going to believe this,” Councilor Mark Goughan said to the mayor, “but I agree with you.”

Councilor Phil McDonough later suggested three percent and the other councilors all agreed.

The councilors also had discussions with city department heads regarding their individual budgets, beginning with Fire Chief Scott Susi.

Goughan expressed concerns that “in-house labor” used for outside ambulance calls might not be bringing in enough revenue, and asked Susi if their work outside of Caribou has resulted in a loss of money.

The fire chief said the employees getting called in receive regular overtime pay, and Goughan said that when the concept of an “in-house ambulance service” was first brought up 20 years ago, he remembered that it was “in hopes that we could take any excess revenue and keep it in the department to offset taxation for the future year,” adding that he is “pretty sure any excess now goes to the general fund.”

“Every penny we make goes to the general fund,” Susi said.

Goughan then asked if the chief worries about “mission creep,” a military term that refers to a shift in objectives beyond the scope of the original mission or goal, and that if he is concerned that assisting other communities may cause the department to lose focus on helping people in Caribou.

Last year, Susi said Caribou Fire and Ambulance took 299 out of town ambulance calls while they took 2,000 within the city.

Goughan clarified his concerns by saying he just wanted to make sure the department wasn’t “paying 99 cents to make a dollar.”

Susi told the councilor that the department was not losing money.

Caribou Parks and Recreation Superintendent Gary Marquis then answered some questions posed by Councilor Goughan regarding a plan to bring in spotlights for the Nov. 6 election, a temporary fix while the department works with Efficiency Maine to change the gymnasium over to an LED system.

Marquis said the current lights are 10 years old, and that while they were all working properly at the beginning of the year, 15 have gone out since then.

Goughan said that bringing in spotlights for the upcoming election “is not a very professional way of taking care of a new building.”

He asked if the city could look better.

He said it would have cost between $4,000 and $5,000 to replace the current lights while still having “the same problem down the road,” and that the good lights will be burned out in a matter of months.

“It doesn’t look the best,” said Marquis, “but I have no real choice.”

Goughan also asked both Marquis and Library Director Hope Rumpca if they are effectively marketing their respective departments.

“Are you concerned about mission creep?” he asked, “I wonder if we’re marketing our Rec Department to the best of our ability. Not that you’re not doing any marketing.”

The councilor said that while he’s not “picking on any one department,” the community as a whole is not growing in terms of population, and he asked if there are any other avenues in which the departments could market themselves to draw more residents.

Marker told Goughan that the soccer program has been pulling in teams from Fort Fairfield and a handful of outside communities, as “the word is getting out about our quality here.”

Marquis agreed, and said that the department has youngsters coming from Limestone, Easton, and Caswell for their summer sports programs, and that while not every outside family chooses to move to Caribou, the department is collecting non-resident fees.

The recreation superintendent said that while “15 years ago we were the only game in town,” Caribou Rec now has to compete with other departments, and that they are always working to innovate and add new programs for local kids, such as working with UMPI’s STEM program, concluding that he feels Caribou Rec does “a bang up job.”

Goughan later told Rumpca that she “needs to be constantly thinking about how to market” the library.

Rumpca asked Goughan if he had seen the library’s website, Facebook page, or if he has walked in the building, as it is covered with information about “what we provide and what we can do.”

“Yes,” he said, “I see that, and I just want to make sure there is no stop in the creative thinking of you can do it better.”

“Well,” Rumpca said, “I do only sleep about four hours a day.”

Councilor Phil McDonough added that he’s noticed a “marked improvement” in both the library and its exposure over the “past few years.”

Rumpca also reported that while a line in her budget for new library cards was set at $600, she recently found a new company willing to print new cards and “do everything for $500 with shipping.”

Councilors also looked at the police budget, and Goughan asked Chief Michael Gahagan about reports of elder abuse in the community.

“It’s a nationwide issue, and is especially common with relatives,” Gahagan said. “Some elders are even sexually abused. You’d be surprised what we deal with in our world every day.”

Goughan asked if there is currently a program in place to combat elder abuse, and Gahagan said there are training programs that bring awareness to abuse, particularly phone scams.

Martin said he always tells his 86-year-old mother in law to “never give anything out over the phone,” and Gahagan added that the department makes sure to spread the word via its Facebook page if any new scams pop up in the area.

Goughan said he was not aware that the police were putting the word out regarding scams, and thanked Gahagan for the way he helped his father when he fell victim to a scam “hook, line, and sinker.”

“The way you talked to him,” Goughan said, “and the way your staff treated him, is what I consider a great reason to live in small town USA. My hats off to you, because I know you treat people just like you treated him.”

“This is my hometown,” the chief said.

Caribou’s next council meeting is scheduled for Nov. 13 at 6 p.m. and, according to the city website, will include a public hearing on the 2019 expense budget.

Halfway Home Pet Rescue in Caribou has partnered with the Houlton Humane Society shelter for a cat spay and neuter clinic on Saturday, May 30, and Sunday, May 31, in Houlton.
Campaign Corner END_OF_DOCUMENT_TOKEN_TO_BE_REPLACED