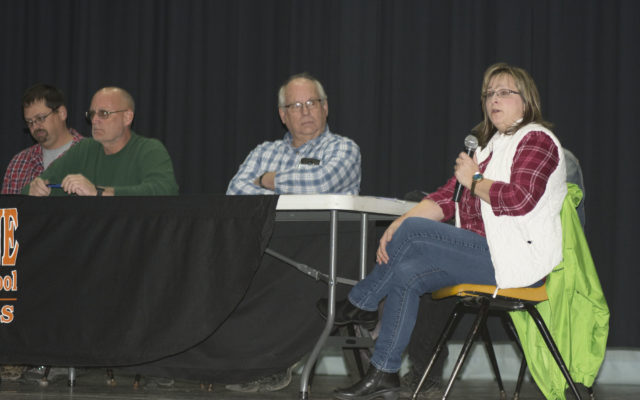 Chris Bouchard • November 7, 2018
On Election Day, the people of Limestone showed overwhelming support for leaving RSU 39, a school unit which shares resources and money between Caribou, Limestone, and Stockholm.

LIMESTONE, Maine —  On Election Day, the people of Limestone showed overwhelming support for leaving RSU 39, a school unit which shares resources and money between Caribou, Limestone, and Stockholm.

According to a town official, 445 residents voted in favor of withdrawal while only 198 supported remaining in RSU 39.

With the measure approved, Limestone will officially withdraw on July 1, 2019, following the 2018-19 school year.

Talk of withdrawal began on April 6, 2017, when the RSU 39 school board voted to send Limestone’s grade 9 to 12 students to Caribou in an effort to close the gap on a $1.4 million funding shortfall. RSU 39 officials projected this move would save roughly $600,000, because the ED 279 funding formula penalizes school districts for having lower student-to-teacher ratios; removing high school teachers from Limestone would cut expenses; and adding students to Caribou High School would make that school eligible for more state funding moving forward.

Limestone residents began circulating a petition for withdrawal soon after this vote, and many voiced concerns that RSU 39 could potentially also shut down Limestone Community School (which was formerly a Pre-K to 12 facility), since the regional board has more representation from more populated Caribou.

The petition effort succeeded and, just over a month after RSU 39 voted to send Limestone’s high schoolers to Caribou, Limestone residents voted 205 to 79 in favor of spending up to $40,000 on the withdrawal process, which included hiring an attorney to help draft the withdrawal agreement.

Beaulieu discussed Limestone’s next steps during a selectboard meeting the night after the Nov. 6 election, and said the committee is currently waiting for Eastman, who was in Ohio at the time of the vote, to assist the town moving forward.

She added that the town also could task Eastman with helping the community hire a superintendent, at which point the selected individual would assist with the remaining work.

“We need to get papers drafted for the school board election,” she said, “and figure out a timeline for what needs to happen. I’m going to get this done as quickly as I can. If I could do it all tomorrow I would.”

Limestone resident Julie Weston asked how many people would be on the school board, and Beaulieu said that after studying surrounding communities, seven would be a reasonable number of members.

“I looked at schools in the area,” she said. “Caribou has seven. Presque Isle has about 14, and most communities were in a range of five to 15 members.”

Beaulieu said that, with seven members, five could weigh in on an important issue if two were missing for a meeting.

The town also held two recent public hearings on the withdrawal process leading up to the Nov. 6 vote. As with the first vote, residents who spoke up during those hearings generally voiced their approval of leaving RSU 39.

Tim Doak, RSU 39 superintendent, said on Nov. 7 that at this point he is waiting to hear from Limestone representatives and “help with their transition,” and see how they would like to go about the transition in terms of hiring their own staff.

As far as the budgetary impact to Caribou and Stockholm, the two remaining RSU 39 communities, Doak said it essentially comes out as a wash. The Limestone side expressed similar sentiments, as financial projections shown during a Sept. 11 withdrawal hearing indicated taxpayers would be more or less paying the same, or even possibly less, than their 15 percent share to RSU 39 once they begin to independently manage their school.

Doak said the Maine Department of Education ran a simulated ED 279 funding breakdown with just Caribou and Stockholm as part of the RSU, and discovered that the state could actually provide the community with more money, as the removal of several small classes in Limestone from the equation would put them closer to Maine’s student to teacher ratio requirements.

Limestone, however, was part of RSU 39 when the majority of member communities voted to create a new Pre-K to 8 school in Caribou. A primarily state-funded project that includes roughly $2 million worth of locally funded additions. Doak said RSU 39 and Limestone officials eventually came to an agreement that the departing community would pay RSU 39 $150,000 upfront for leaving the project, roughly half of what its 15 percent share would have been had the town remained in the district.

Aside from this, he said Limestone’s withdrawal would not have any impact on the new school.

Even though the withdrawal deadline is July 1 of next year, Doak said he wants to work with Limestone and make sure all arrangements are taken care of before that point.

“We want this transition to be as smooth as possible,” he said.

For all it does to refresh us, burn energy and keep us sharp, we all need playtime, dogs and cats included. Sharing playtime with pets has the added benefit of strengthening the bond between us, so we better understand one another.
Campaign Corner END_OF_DOCUMENT_TOKEN_TO_BE_REPLACED