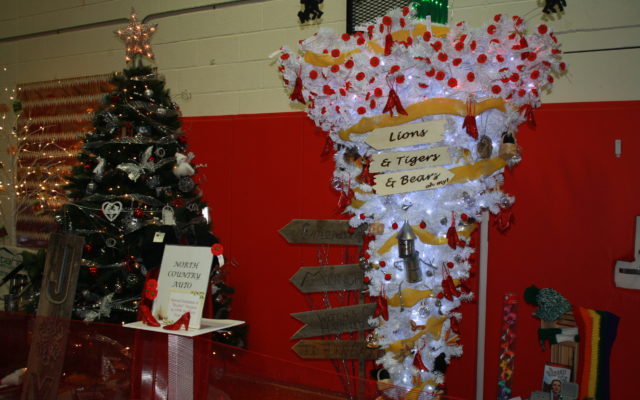 Melissa Lizotte • December 1, 2018
Throughout the past weekend, the gymnasium at Northern Maine Community College was filled with over 60 colorful and unique Christmas trees and hundreds of visitors who helped a local dental clinic raise their highest amount of funds for children’s dental care.

PRESQUE ISLE, Maine — Throughout the past weekend, the gymnasium at Northern Maine Community College was filled with over 60 colorful and unique Christmas trees and hundreds of visitors who helped a local dental clinic raise their highest amount of funds for children’s dental care.

St. Apollonia Dental Clinic’s 5th annual Festival of Trees gave community members the opportunity to purchase tickets and try their hand at winning their favorite trees and the special gifts featured underneath. The festival has come to serve as a major fundraiser for St. Apollonia, a clinic that provides free dental care for children — 90 percent of whom are either on MaineCare or without insurance. With the ongoing community support, the folks at St. Apollonia raised $97,000, all of which will go toward the clinic’s dental services.

Sherry Chamberland, treasurer of the clinic’s board and manager of NorStar Title Company, said that the clinic and its festival volunteers thanked all their sponsors — including 11 who have been with them since the beginning — with a special reception at NMCC the night before the festival’s opening. They also invited children with special needs to come view the trees before the official kickoff, as many children with autism spectrum disorders feel overwhelmed by large crowds and loud music.

“We wanted to show our appreciation to the sponsors and the community for their generosity and support,” Chamberland said.

Many of the sponsors contributed trees that stood out among the more traditionally decorated Christmas trees. The Presque Isle-based Aroostook Beverage Company chose a “man cave” theme complete with gifts such as Budweiser hats, a tabletop grill, dartboard, a Boston Red Sox sign and an Angry Orchard statue.

“This is our first year with the festival,” said Bonnie Cowett, office manager for Aroostook Beverage Company. “We appreciate that all the funds raised will stay local and go toward a great cause.”

Some sponsors chose to put a personal touch on the gifts beneath their tree. The Crown of Maine Quilters, a 40-member group, got together to sew a “Birds in the Air” quilt and create bird-themed ornaments. This is the 4th year that the quilters have participated in the Festival of Trees.

“We started sewing the quilt in March,” said Chris Murphy, president of the Crown of Maine Quilters. “It was fun to get together and give each other ideas for the tree.”

Other trees ranged from a “Harry Potter” theme with a collection of books, DVDs and toys courtesy of MMG Insurance; a music tree from the University of Maine at Presque Isle — complete with a record player, records and CDs, a guitar, rocking chair and two tickets to a 2019 Ozzy Osbourne concert in Bangor; the Aroostook County Action Program’s Community Giving Tree, featuring hundreds of boxes of cereal to be donated to children in their early care and education centers; and even an upside down “Wizard of Oz” tree meant to resemble the famous twister that brings Dorothy to the land of Oz.

“I want to win the ‘Harry Potter’ tree. It’s my favorite,” said 10-year-old Madison Thibault, of Caribou, as she and her family wandered among the Christmas trees during the festival’s opening night on Nov. 30.

Madison’s sister Jordan Thibault, 8, had her eyes set on the “Family Night In” tree donated by the County Federal Credit Union that featured 16 games, a flat screen T.V., DVDs, candy, a Nintendo classic and blankets.

“I want that one,” she said, pointing to the tree excitedly.

As children hurried around the gym Friday night, debating on which trees they would most want to win, many adults also expressed appreciation for the festival and the exciting way in which it kicks off the holiday season. Chris Pelletier, of Presque Isle, smiled as his 19-month-old son Quentin had a blast dropping tickets into boxes, hoping to win a Christmas tree.

“The holidays are all about getting together and visiting people you might not have seen in awhile, and this is a great place to take part in that,” Pelletier said, about the Festival of Trees.

Chamberland said that community members had positive things to say about the festival and have already gotten excited for next year.

“I have already heard from new organizations who want to do trees for the first time next year, and sponsors from this year tell me they are already planning themes for next year,” Chamberland said.

Only one member of Maine’s congressional delegation had come out in favor of impeaching President Donald Trump ahead of House Speaker Nancy Pelosi’s Tuesday announcement that the Democratic-led House of Representatives would begin an impeachment inquiry.
Pets END_OF_DOCUMENT_TOKEN_TO_BE_REPLACED

We think a cat can make for the best pet in the world. To truly love a cat, you must learn to accept them for what they are -- unpredictable and quirky, which is something unique and unlike any other pet.
Campaign Corner END_OF_DOCUMENT_TOKEN_TO_BE_REPLACED