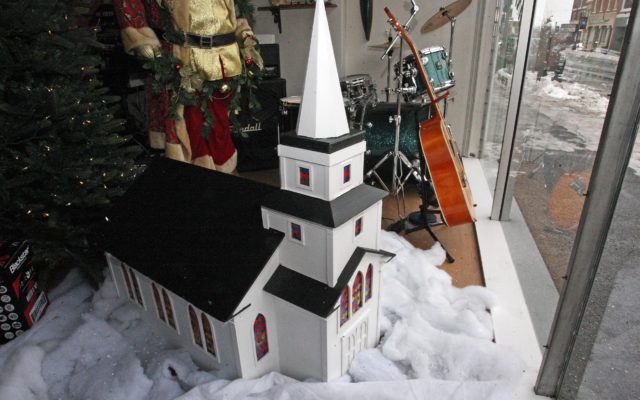 Joseph Cyr • December 4, 2018
A holiday item that was once believed to have been lost forever has been found and restored.

HOULTON, Maine — A holiday item that was once believed to have been lost forever has been found and restored.

Cheryl Lovely, owner of Mini Music and Tack Shop on Main Street in Houlton, said Monday that she had all but given up hope of ever seeing the ornate wooden church that once was part of Dunn Furniture Company’s annual holiday window decorations display in downtown Houlton.

Since her 73 Main St. business is located in the former Dunn Furniture Company, Lovely has long wondered what had happened to some of the many elaborate decorations that used to grace the storefront windows. But it was the church that she missed the most.

First built in in 1954, the wooden church was designed by Clayton “Chick” Currie and constructed by Ronnie Craigs.

In 1989, Lovely said she borrowed the church, which had been stored in Dunn Furniture Company’s warehouse on Alice Avenue. At that time, the church was in “pretty rough shape,” according to Lovely.

“We brought it home and my dad (Bill Lovely) did some work on it, and we had it in our storefront for the next two years,” she recalled. “Frank (Dunn) asked to have it back for their display and from there we lost track of it.”

In the mid-90s, Lovely again approached Dunn to see if she could use the church and was told it was believed to have been destroyed when a fire ravaged the Dunn’s warehouse. Many of the holiday decorations were destroyed in the fire.

“I was heart-broken,” Lovely said. “I had kind of given up on the idea that I would ever see it again.”

When Dunn Furniture Company closed its doors in early September, local businessman Matt Carr purchased the contents of the company’s warehouse, located behind their storefront on U.S. Route 1.  Lovely helped Carr unbox some of the items, and her heart skipped a beat when she opened one of the boxes to find the steeple to the church.

“I started crying,” she said. “I was so emotional.”

After a bit more digging in the warehouse, lo and behold, wrapped neatly under a tarp was the remaining piece of the church.

“I was ecstatic,” Lovely said. “It probably doesn’t mean a lot to many, but it sure means a lot to me.”

Lovely said Ken Clukey, who does repairs on guitars for her business, refurbished the church for display in her window.

Dunn said he was beyond delighted to learn that the church had not only been found, but also restored to its original splendor. Lovely invited Dunn to her business last week to get a look at the newly-restored church, which had meant so much not to just him, but many others.

“Cheryl called to invite me to see what she had done to her store window,” Dunn said in an email. “She had found the little country church that Chick Currie had designed and Ronnie Craigs had constructed back in the 1950’s. It was banged and dented, but Cheryl used her skills and with loving care has it highlighted in her store window for all to enjoy.”

“Hundreds of people have asked about those wonderful windows,” Dunn said. “Most of them were built in place, so we were unable to move them. After the holidays they were just a lot of pieces. But the church was made in just two pieces. I’m sure many will remember the many other windows that Chick and Ronnie created.”

“Seeing the little church again made me both happy and sad,” Dunn said. “It was a real honor working with those talented people (at Dunn’s).” 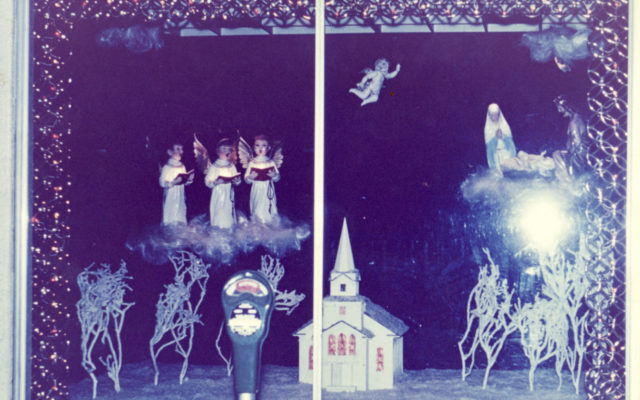 This 1963 photograph shows the wooden church in the window of Dunn Furniture Company as part of a holiday display. (Contributed)

For all it does to refresh us, burn energy and keep us sharp, we all need playtime, dogs and cats included. Sharing playtime with pets has the added benefit of strengthening the bond between us, so we better understand one another.
Campaign Corner END_OF_DOCUMENT_TOKEN_TO_BE_REPLACED