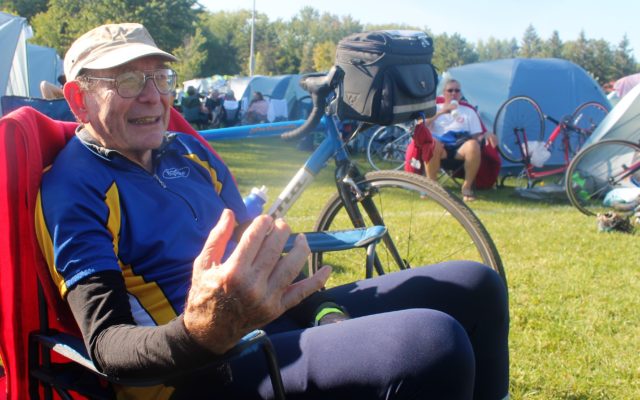 BikeMaine generated $742,000 for economy with County tour this summer

Anthony Brino • January 2, 2019
The 2018 BikeMaine tour through Aroostook County generated an estimated $742,000 for the economy, according to the Bicycle Coalition of Maine.

PRESQUE ISLE, Maine — The 2018 BikeMaine tour through Aroostook County generated an estimated $742,000 for the economy, according to the Bicycle Coalition of Maine.

Last September, the Bicycle Coalition of Maine ran its sixth annual BikeMaine tour through central Aroostook County and the St. John Valley with 450 cyclists who paid for the organized tour, food and lodging.

To feed riders on the weeklong event, the Coalition purchases food and works with local organizations to prepare meals, with a requirement of getting 70 percent of the food from producers within 70 miles.

“As much as possible, food — the event’s single largest expense — is purchased from Maine farmers, lobstermen, and growers, highlighting Maine products and local services,” Luce said.

Gubernatorial candidate John Glowa said that he wants to spur government reform that truly creates a system of, by and for the people when he visited Presque Isle City Hall.
Pets END_OF_DOCUMENT_TOKEN_TO_BE_REPLACED

Many of you have been asking about our super popular “Toast to the Animals” celebration. After several COVID-19 cancellations and not being able to host this great fundraiser, we are finally ready to celebrate the animals once again and help support the Central Aroostook Humane Society.
What's Happening This Week END_OF_DOCUMENT_TOKEN_TO_BE_REPLACED