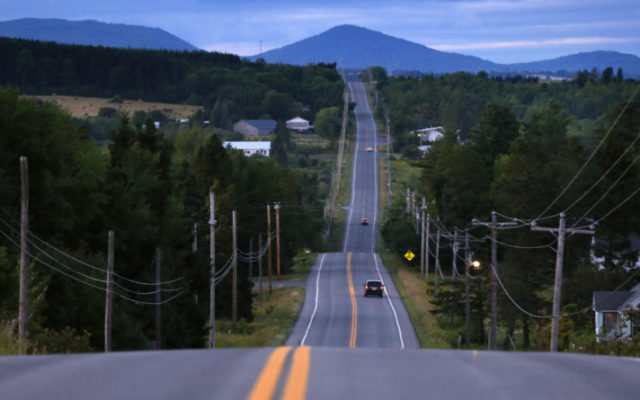 Many of Maine’s struggling former mill towns are trying to shape their economic futures. Some are looking toward new recreation and business to jump-start lagging economies. But in some towns, residents are worried that new rules governing development in Maine’s North Woods could impede some of that progress.

On a chilly weekday morning, Millinocket Town Councilor Michael Madore drove past his childhood home in the town’s Little Italy neighborhood. He pointed out the window to what remains of the Great Northern Paper mill, once the largest of its kind in the world. After years of bankruptcies and layoffs due to a declining paper industry, the mill finally closed in 2008.

Millinocket’s population fell by about half.

“Houses were abandoned. It was hard times. The town had to make very drastic cuts in services. We did the best we could. And now we’re starting to see a resurgence,” he said.

After years of fighting over its future, Madore said the town has recently unified around a focus on recreation, tourism and the forest products industry. But many in Millinocket are now concerned about proposed rules that could change the way that the North Woods would be developed, and potentially slow that progress.

The new proposal from the state’s Land Use Planning Commission is complicated, but here are the basics: Since the 1970s, development across Maine’s millions of acres of Unorganized Territory has been guided by something called the “adjacency principle,” which says that subdivisions and commercial developments can only be built within one mile, by road, of existing, similar developments.

LUPC Planning Manager Samantha Horn said that created a system of development that resembles tiny freckles scattered across the region.

“The policy has been that if any one of those freckles, if you go out a mile from there, that’s where you can apply for a new zone to do more development,” she said.

But Horn said rural economies are changing. And land use planning has become more complicated. Instead of that old freckle approach, the commission is proposing a new system.

First, the new rules would, for the most part, only allow development near more than 40 communities designated as “rural hubs,” containing services such as fire and ambulance. Most commercial and residential development would potentially be allowed within seven miles of the border of these hubs and up to one mile from a public road. Other residential development would also be allowed in some nearby communities. And certain businesses, such as trail centers, could potentially be built even farther away.

Horn said the rules are intended to push development toward these specific, rural communities.

“So we’re trying to come up with a more tailored system, so that we can make sure that people can do entrepreneurial activity in appropriate places without causing fragmentation and without harming the natural resources,” she said. “We want to have a good fit between the kinds of business activities and the natural resources that they rely on.”

“This just is not supportive of what we’re looking to do in the region,” said Jamie Brundrett, owner of the Katahdin General Store in Millinocket and president of the Katahdin Area Chamber of Commerce.

Brundrett is concerned that the new, seven-mile rule could incentivize businesses to locate farther outside of town lines, which could affect tax revenues.

“It allows such broad, sweeping changes,” he said. “For people to come in and just put up development or strip malls. And that also affects the local economies that are already here.”

And Millinocket Town Councilor Randy Jackson believes that if development expands farther beyond town borders, it could be more difficult, and more expensive, to provide emergency services to areas potentially far from town.

“It’s going to be very, very difficult for these small towns up here to provide any more services than we’re already providing. Because you have to think, most of our towns, our fire departments, are run by volunteers. And our volunteers are getting older,” he said.

Other critics, including some environmental groups, said they’re concerned that the new rules could damage the pristine character of the North Woods.

Marsha Donahue, a Millinocket gallery owner, shares that fear, and worries that too much development, particularly around some of the state’s scenic byways, might make visitors wary.

Horn said LUPC staff are looking at addressing concerns about scenic byways. But she stresses that the adjacency principle is only an initial screening tool, and there are other criteria for approving development projects.

Horn said developers still need to show that a local government would provide emergency services, and that the project wouldn’t “unreasonably alter the character of the area.”

“And really what this does, this high-level screen, is just to say, ‘We’re going to tell you, basically, where should we encourage people to start the application process.’ This is not a pre-approval by any means,” she said.

And some municipalities now support the changes. The town of Jackman, for example, sent a letter to the LUPC this month saying that it feels the proposed rules will “benefit our community and others like us.”

Judy East, executive director of the Washington County Council of Governments, is optimistic that the changes can promote development and protect natural resources. She compared the current rules to a big, broad instrument, like a club.

“They’ve basically gone from a club to a sharp set of tools to make some good decisions going forward,” she said.

Horn said LUPC staff have spent months talking with local communities and are still reviewing testimony and tweaking the proposal as the commission prepares to formally take up the new rules in the next few months.

Halfway Home Pet Rescue in Caribou has partnered with the Houlton Humane Society shelter for a cat spay and neuter clinic on Saturday, May 30, and Sunday, May 31, in Houlton.
Campaign Corner END_OF_DOCUMENT_TOKEN_TO_BE_REPLACED