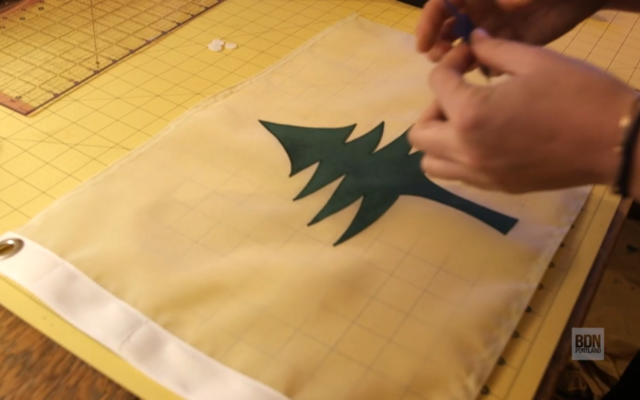 Mal Leary, Maine Public • March 6, 2019
Lawmakers are being asked to revise the design of the Maine state flag by adopting a version first used in 1901.

Lawmakers are being asked to revise the design of the Maine state flag by adopting a version first used in 1901.

There was no opposition at a public hearing on the bill under consideration by the State and Local Government Committee, but that does not mean the proposal will get the green light.

The bill would retire Maine’s current flag, which depicts the state seal on a blue background and replace it. The 1901 design includes a pine tree on a buff background with a blue North star.

David Martucci of Washington is a fan of its simplicity. Martucci is a past president of the North American Vexillological Association, a group that studies the history, symbolism and usage of flags.

[Maine’s once forgotten original state flag is making a comeback]

“It was supposed to be the color of tanned deer hide and the stiffness of that material meant standing firm for American independence,” he said.

Bill co-sponsor Rep. Deane Rykerson, a Democrat from Kittery, said he likes the state seal, but not on the state flag.

“I do like the farming and the seafaring and the woodlands, but that poor moose kinda looks like a gerbil on the state flag,” he said.

Some members of the committee are balking at the idea of abandoning Maine’s current flag, adopted in 1909. One compromise being floated is giving the first official flag of Maine special status during the upcoming bicentennial.