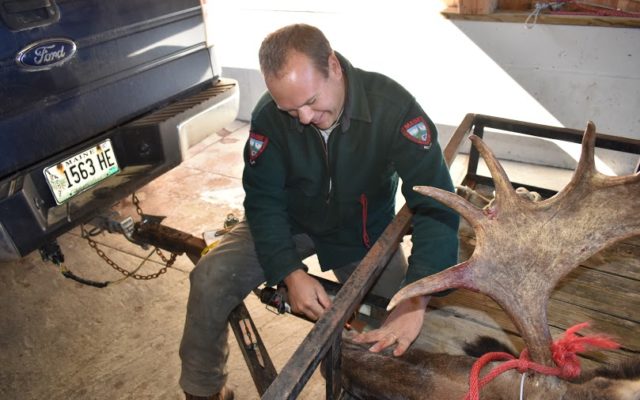 John Holyoke • March 22, 2019
Maine wildlife biologists on Thursday proposed a slight increase in the number of moose permits for the coming seasons.

Maine wildlife biologists on Thursday proposed a slight increase in the number of moose permits for the coming seasons. If approved, the number of permitted hunters would jump from 2,500 to 2,820, according to a Maine Department of Inland Fisheries and Wildlife spokesman.

The proposal is preliminary and was made to the DIF&W’s advisory council. Rulemaking that is undertaken by the department requires a three-step process in front of the council. Debate and discussion will follow in the second step at the April council meeting, while the council will vote on the matter in May.

“We’re seeing an increase in permits in moose’s core range — WMDs 1-6 — and we’re now managing [according to] the new big game plan where we’re managing for moose health, and increasing the number of permits, including the number of antlerless permits, will keep the herd healthy and thriving up there,” DIF&W communications director Mark Latti said.

That timing is crucial, because an exact number of permits to be allotted must be determined by the DIF&W before the June moose permit lottery, which will take place June 8 at Cabela’s in Scarborough.

The modern moose hunt in Maine began in 1980 as a one-year experimental hunt. After a year to assess that season, it was staged again in 1982 and has been held annually since

The highwater mark for permits came in 2013, when 4,110 hunters headed afield. The lowest total: 700, in the first year of the modern hunt.

The 2019 hunt will be split into sessions, with a predetermined number of permits in play over a given number of Wildlife Management Districts. The seasons:

No hunting is allowed Sundays.

For all it does to refresh us, burn energy and keep us sharp, we all need playtime, dogs and cats included. Sharing playtime with pets has the added benefit of strengthening the bond between us, so we better understand one another.
Campaign Corner END_OF_DOCUMENT_TOKEN_TO_BE_REPLACED