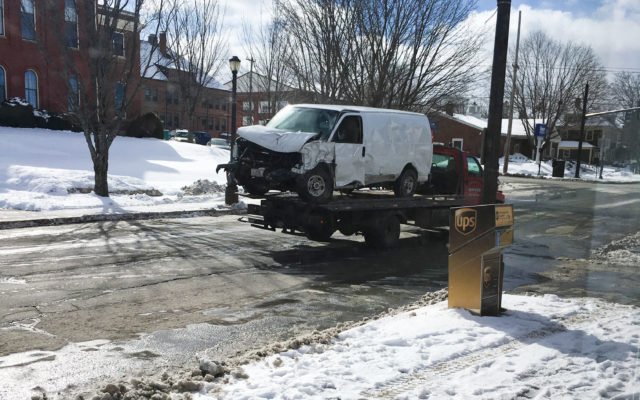 Two transport vans collided on U.S. Route 1 on Bunker Hill in Bridgewater at about 7:30 a.m. Thursday as high winds and blowing snow made travel conditions hazardous.

Maine State Police Sgt. Chad Fuller said Thursday afternoon that the driver of a church van carrying seven passengers, some of whom were minors, lost control while heading south on the snow and ice covered roadway, and crossed into the oncoming path of an Aroostook County Sheriff’s Office van transporting seven inmates.

“Both vans had severe damage, and there were at least 15 injuries between all the involved parties,” Sgt. Fuller said. “Injuries were not life threatening, but many were significant, to include broken bones, lacerations, dislocations and complaints of pain.”

Firefighters had to use special equipment to extract some of the passengers, he reported.

Sheriff Shawn Gillen said earlier that the van was transporting inmates from the jail in Houlton to district court in Caribou.

“We have all the inmates and correctional staff at the hospital,” Gillen said. “There are injuries, but nothing life-threatening.”

Fuller said the sheriff’s van was struck by a passenger van owned by the Full Gospel Assembly of Mars Hill and driven by a 41-year-old Mars Hill woman. He did not identify the woman, nor did he release the name of the 29-year-old Oakfield male who was driving the jail van.

The MSP sergeant said the driver of the ACSO van attempted to swerve to the right but was unable to avoid the collision.

Rescue personnel transported all of the injured by ambulance to either Houlton Regional Hospital or Northern Light AR Gould Hospital in Presque Isle.

The investigation is ongoing, Fuller said, which is why the names of the drivers, or any of the passengers, have not been released. The police report states that the church van was driving too fast for road conditions. Both drivers were wearing seatbelts.

Houlton Ambulance Director Milton Cone confirmed mid-morning that a Houlton ambulance responding to the crash also went off the road due to poor road conditions. There were no injuries to the emergency responders, he said.

The Aroostook County Emergency Management Agency posted at 7:50 a.m. that the road, which serves as the main corridor for traffic between Houlton and Presque Isle, was closed and people should make other travel plans.

The road reopened for traffic around 10:30 a.m., but Maine State Police Lt. Brian Harris said that visibility due to high winds causing whiteout conditions was still a major concern. A detour was set up at the four corners in Westfield, redirecting traffic traveling north on U.S. Route 1 onto the Shorey Road to avoid one of the worst sections of U.S. Route 1.

The National Weather Service office in Caribou issued a wind advisory in effect until 6 p.m. Thursday with northwest winds gusting up to 50 miles per hour expected in some areas.

The weather service warned motorists about the possibility of blowing snow significantly reducing visibility and causing localized hazardous travel. The hazardous conditions could affect the evening commute and strong winds could cause tree damage. Travel is not recommended on roadways in open terrain.

Police agencies also reported roads closed in other areas of Aroostook County. The Caribou Police Department said South Main Street from Russel’s Motel to U.S. Route 1 was shut down due to visibility concerns.

The latest road conditions for Maine can be obtained by going to www.newengland511.org. 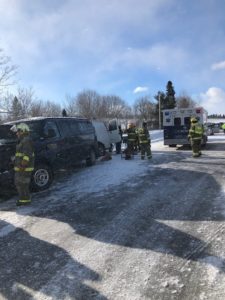 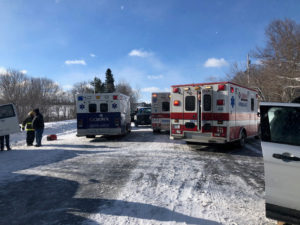 Ambulances from Houlton, Presque Isle and Crown Ambulance respond to the collision of two passenger vans on U.S. Route 1 in Bridgewater Thursday morning. A total of 15 people, including minors and several inmates from the Aroostook County Jail, were injured when the transport vans collided. (Courtesy of Maine State Police) 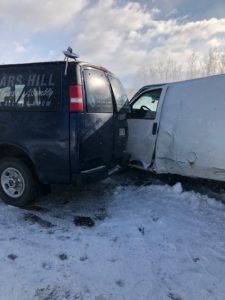 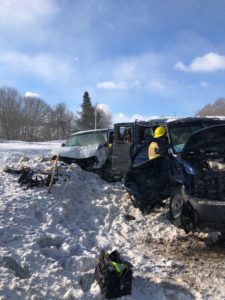 At the Houlton Humane Society, we take adopting the cats and dogs in our charge very seriously.
Campaign Corner END_OF_DOCUMENT_TOKEN_TO_BE_REPLACED