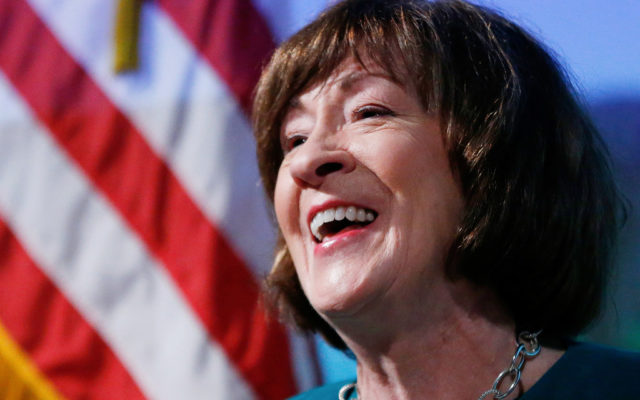 Michael Shepherd • April 25, 2019
U.S. Sen. Susan Collins is a top target of Democrats and a little-known grassroots Republican has announced a primary challenge against her, but a poll shows the senator’s reshaped base is holding together in the approach to the 2020 election.

Good morning from Augusta. U.S. Sen. Susan Collins is a top target of Democrats and a little-known grassroots Republican has announced a primary challenge against her, but a poll shows the senator’s reshaped base is holding together in the approach to the 2020 election.

Collins seems to be in a strong position despite an unprecedented level of Democratic activism against her after an October vote to confirm U.S. Supreme Court Justice Brett Kavanaugh that looks to have turned Republicans toward her at the same rate it turned Democrats against her.

Maine’s senior senator is in the middle of the pack among Republican senators running for re-election in 2020 when it comes to party approval. A national survey from Morning Consult conducted over the first quarter of 2019 found that 67 percent of Maine Republicans approved of Collins, putting her in the upper half among Senate Republicans up for re-election in 2020. (Majority Leader Mitch McConnell of Kentucky was fourth-lowest at 58 percent and Lindsey Graham of South Carolina was highest at 80 percent.)

It shows that Collins has quickly assumed the profile of a more typical Republican politician after romping to a fourth term in 2014 with lots of support from Democrats and years of approval ratings above 60 percent. Her overall approval rating from Morning Consult in the first quarter of 2019 stood at 52 percent, roughly the same as it was in the preceding quarter.

The research firm also found that her 46-percentage-point drop in approval among Democrats between the third and fourth quarters of 2019 was matched by an increase among Republicans, explaining why her overall standing hasn’t changed much despite becoming a lightning rod.

That’s also evidenced by the fact that Collins raised more money during the quarter after the Kavanaugh vote than she had in any previous quarter of her career. She’d raised $4.4 million for her race through March’s end, with virtually all of it coming from out of state. That haul matches two national progressive crowdfunds aimed at her since the Kavanaugh vote.

Collins has looked vulnerable on her right before, but she doesn’t now. The Republican senator has always kept good connections with state Republican leaders, though many were angry with her after her first 2017 move to help preserve the Affordable Care Act and a shadowy poll after that showed that six in 10 Republicans here disapproved of her.

Around that time, then-Gov. Paul LePage was rallying supporters to urge her not to run to replace him. Collins decided not to — even as she said she was “absolutely confident that I would have been able to win both the primary and the general election.” Only Derek Levasseur, a state GOP committeeman from Fairfield, has said he’ll primary her, but he hasn’t filed yet.

The problem she had then doesn’t seem to exist now and the problem she has now among Democrats — who don’t have a well-known candidate yet but could draft House Speaker Sara Gideon, D-Freeport — could be offset by a stronger base. It all makes a challenge against Collins difficult despite some progressive momentum.

The Senate could hold votes on high-profile vaccine and school mascot bills endorsed by the House. The Senate and House of Representatives are scheduled to be in at 10 a.m. today. The weightiest action looks to be in the upper chamber, which could vote on a bill from Rep. Ryan Tipping, D-Orono, that would remove all nonmedical exemptions to school vaccine requirements and another bill from Rep. Ben Collings, D-Portland, that would prevent public schools from having mascots or team nicknames referring to Native Americans or their culture.

Both of those passed the Democratic-led House and are good bets to pass the Senate, though they face further action in both chambers and there were some Democratic defectors on the vaccine bill. The House could hold initial votes on a raft of bills including some affecting the Department of Health and Human Services.

The first woman to serve as Maine’s governor will testify at a public hearing to make references to the governor and high court justices gender-neutral. The Judiciary Committee will hold a 1 p.m. hearing on several bills including one from House Majority Leader Matt Moonen, D-Portland, that would make masculine statutory references to the governor and chief justice of the Maine Supreme Judicial Court gender-neutral. Those two positions are currently occupied by the first women to hold them — Janet Mills and Leigh Saufley, respectively. The Democratic governor is expected to testify in support of Moonen’s bill this afternoon.

In other committee business, the energy panel will continue to work on bills that would bar the use of eminent domain for projects such as Central Maine Power’s $1 billion corridor proposal that could be the Legislature’s next shot at that project, which is supported by Mills. See today’s full legislative schedule here.

— A federal judge in Bangor will soon decide whether to block implementation of federal rules that would limit women’s health providers from sharing information about access to abortion.Attorneys for Maine Family Planning, the state’s only direct recipient of federal Title X funds which would be denied to entities that share information about access to abortion, are seeking an injunction that would block the rule from taking effect as scheduled on May 3. Wednesday’s more than two-hour hearingbefore U.S. District Judge Lance Walker came the morning after a federal judge in Oregon considering a separate but similar legal challenge against the rule said he would grant a preliminary injunction blocking it.

— Democrats in Maine made their case for automatic voter registration. Maine Public reports that a bill sponsored by Gideon would create a system in which people who get a driver’s license or transact other business with the Bureau of Motor Vehicles would automatically be registered to vote. If the bill passes, Maine would join more than a dozen other states with some form of motor-voter automatic registration system.

— A business group’s annual assessment of conditions in Maine indicates that things here haven’t changed much. The annual “ Measures of Growth Report,” released Wednesday by the Maine Economic Growth Council, gives the state high marks for public safety and natural resources protection, but continues to raise red flags on the state’s low investment in research and development, troublesome student test scores and our aging workforce.

— An eminent domain fight could be brewing in a coastal Maine city. Rockland officials and property owners who want to build a restaurant that would block a private road now used as access to a waterfront park used for the Maine Lobster Festival and other events have been unable to resolve their differences, leading municipal leaders to consider taking the roadway by eminent domain.

The National Football League draft begins tonight. What started as a relatively unheralded allocation of new players carried out by team executives passing around index cards in a New York office has morphed into a three-day, nationally televised extravaganza that prompts a neckless version of feverish, detached-from-reality analysis usually reserved for “Game of Thrones” recaps.

Disdainful friends have dismissed it as a “cattle call,” “meat market” and “modern-day slave trade.” I can’t disagree. But I still am drawn to the draft. I have been a “draftnik” since I was a kid, and I have more than 30 years of spiral notebooks filled with mock drafts to prove it.

If past Patriots’ executives had just followed my lead, the dynasty would have started a lot earlier. And the Giants would have been kicked out of the league for sustained dominance.

Years ago, I wrote about my affinity for the draft in a writing sample required as part of a job application. I did not get the job. That should have clued me in to the fact that being a draft nerd is not viewed as a positive attribute. I guess speculating publicly about the most likely candidates to be Mr. Irrelevant or speaking at length about why the Pats should never have taken Phil Olsen — even if he was Merlin’s little brother — or Hart Lee Dykes in the first round exposes us as weirdos. Or confirms it for anyone who had a doubt.

When ESPN first started televising the draft, I would take the day off from work to watch it. But now that it’s become a prime-time affair that stretches over three days, it’s a lot less fun. The nerdy allure has been stripped away, replaced by glitz and the kind of hyper self-promotion that comes when the league is big enough to operate its own TV network.

For this sour draftnik, the joy is gone. I wouldn’t even watch if not for the opportunity to boo Roger Goodell 32 times from the comfort of my couch. Here is your soundtrack. — Robert Long

Maine is more than eight months into Medicaid expansion under the federal Affordable Care Act and trends around who is enrolling and where they live are starting to emerge, bucking some expectations and pointing out access challenges.
Pets END_OF_DOCUMENT_TOKEN_TO_BE_REPLACED