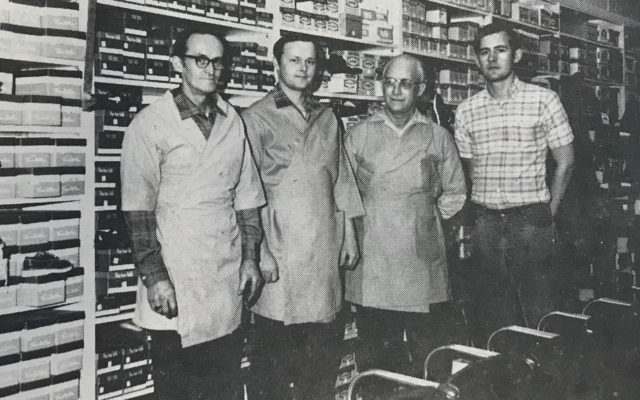 Contributed • April 25, 2019
115 Years Ago - April 22, 1904 Opened a new shop — Mr. C. Cooper of Smyrna Mills has opened a harness shop at the stand formerly occupied by J.J. Royal. Mr. Cooper is a careful, painstaking workman and is well known in Houlton.

Opened a new shop — Mr. C. Cooper of Smyrna Mills has opened a harness shop at the stand formerly occupied by J.J. Royal. Mr. Cooper is a careful, painstaking workman and is well known in Houlton.

Taking down the fence — The work of tearing down the fence around the Houlton trotting park began Thursday. The ground will be laid off into house lots, several having been already disposed of. It makes a very desirable location for home lots, and will doubtless be one of our leading residential sections.

Banquet to go down in history — The banquet given to Col. Frank M. Hume at the Club House by the members of the Meduxnekeag Club was an occasion which will go down in the history of the club as well as that of the town as one of the most notable ever given in Houlton. At the head tables were Vice President Mitchell, at his right Col. Hume and Major E. A. Hosford, recently with the 103rd, while on either side were the members of the club who had been discharged from the service of the U.S. and were: Jas. C. Madigan, Halsen W. Richards, Roland H. Hovey and William Milliken. Mr. Pierce made some very touching remarks concerning the object of the gathering and his glorious valor on the field of battle, as well as the place that he held in the hearts of every member of the Meduxnekeag Club, closing in a very fitting manner with the presentation of a beautiful gold watch as a slight token of the esteem of those present.

New music club president — Mrs. Leo Downie was elected president of the Houlton Music Club, which held its annual meeting last Thursday evening at the home of Mrs. Cleve Towers. A picnic supper preceded the business meeting during which Mrs. Clayton McGary, as chairman of the nominating committee, brought in the slate of officers which was duly elected.

Accepts position — Mrs. William McCain has accepted a position as teacher in the Haggerty School on Littleton Ridge and began her duties there Monday.

Receives award — Marvin Weaver, zone manager for Autolite Ford, presented the Medallion Manager Award for 1968 to Louis Gartley, parts manager of London Motors. Mr. Gartley received the award for excellence in parts management and was one of the honored guests at a banquet Saturday at New England Colonial Inn in Lynn, Mass., sponsored by that company.

Guests at sales meeting — Petroleum Products, Inc., of Houlton, who have represented Texaco for over 42 years, was host last evening to Texaco wholesalers, and retailers from Aroostook, Washington and northern Penobscot counties. More than 100 Texaco representatives and their wives attended the smorgasbord dinner and sales meeting at Parkview Terrace. Leland Ludwig Jr., owner of Petroleum Products Inc., addressed the meeting and presented several awards for years of service.

Donation — Rollerama owners donated half of their April  21 proceeds to the local DARE program in recognition of DARE Day. DARE officer Maurice Ellis accepted a check for $364.50 on behalf of SAD 29 from owners Lisa LaPointe and Brian Doody.

Firefighters ready — With $250,000 and tremendous volunteer effort, the Hodgdon Fire Department was born. The funds to create the long awaited department were appropriated at the May 1993 annual town meeting. However, without the aid of volunteers in the construction process and building materials provided at substantial discounts the project would not have succeeded. The Hodgdon department became officially operational on Jan. 1.

Only one member of Maine’s congressional delegation had come out in favor of impeaching President Donald Trump ahead of House Speaker Nancy Pelosi’s Tuesday announcement that the Democratic-led House of Representatives would begin an impeachment inquiry.
Pets END_OF_DOCUMENT_TOKEN_TO_BE_REPLACED

Last week, we received a phone call about a cat that was in desperate need of help. The young lady said she found a cat that was very skinny and crying and that there was blood in the snow.
Campaign Corner END_OF_DOCUMENT_TOKEN_TO_BE_REPLACED