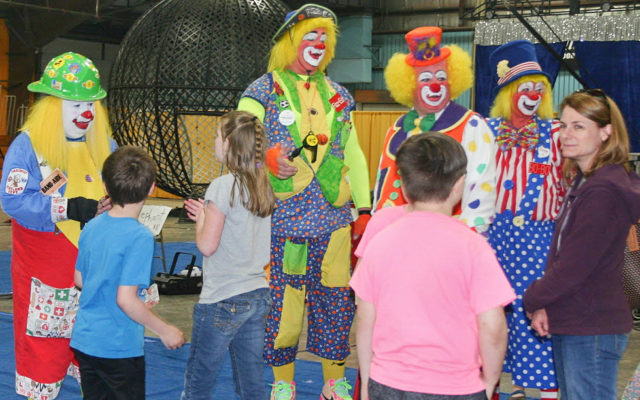 Shrine Circus returns to Presque Isle on May 2

Jen Lynds • April 29, 2019
For many Aroostook County residents, nothing signifies the beginning of spring like the arrival of the Anah Shrine Circus, which will put on its 56th annual performance May 2-4, at The Forum in Presque Isle.

PRESQUE ISLE, Maine — For many Aroostook County residents, nothing signifies the beginning of spring like the arrival of the Anah Shrine Circus, which will put on its 56th annual performance May 2-4, at The Forum in Presque Isle.

Jim Dwyer, Presque Isle circus chairman, said Monday that attendees to this year’s performances will once again be entertained.

“There will be something for everyone,” he said. “We will have the acts that people love, such as the jugglers and the Anah Shrine Clowns. We also will have new acts including a motorcycle jumping stunt act, where the team members launch themselves into the air and do somersaults with their machines.”

He said there will be a good mix of traditional thrill acts and old-fashioned circus acts to appeal to both younger and older audiences, Dwyer said.

The circus, produced by Circus United, has become one of the Anah Shriners’ largest fundraisers. Proceeds support the organization’s philanthropy, including funding for the Shriners’ Hospitals in Boston and Springfield, Massachusetts, which treat children who have orthopedic, burn and spinal cord injuries.

Animal acts will continue to be a part of the Shrine Circus this year, although animal rights protests over elephant and other animal acts have been detrimental to some circuses.

Pressure from animal rights groups caused Ringling Bros. and Barnum and Bailey Circus to eliminate its elephant acts in 2015, and a subsequent drop in ticket sales prompted the so-called Greatest Show on Earth to shut down in January 2017.

Similar circumstances put the Big Apple Circus and Cole Bros. Circus out of business in 2016.

In 2017, Portland City Councilors voted unanimously to prohibit circuses and other traveling acts from exhibiting wild and exotic animals in their community.

“I know there have been some concerns about animal acts in other communities and in other states,” Dwyer said. “But we have talked to our promoters and made sure that our animal acts have been taken care of. In previous years, we have seen a few protesters at our shows in Bangor, but we have not seen any in Presque Isle. We respect their right to protest. But we have not seen any negative reactions from our audience.”

He said the crowds, especially in Presque Isle, love the animal acts.

“I mean, where else is a kid in Presque Isle going to see an elephant?” he asked.

In addition to the elephants, there will be dog acts and even a “trained pig act.”

“That is exciting,” he said Monday. “That is something we’ve never had before.”

The circus typically brings between 11,000 and 13,000 people into The Forum over the three-day period.

“It really signifies the beginning of spring for some people,” Dwyer said. “Everyone has a great time.”

Halfway Home Pet Rescue in Caribou has partnered with the Houlton Humane Society shelter for a cat spay and neuter clinic on Saturday, May 30, and Sunday, May 31, in Houlton.
Campaign Corner END_OF_DOCUMENT_TOKEN_TO_BE_REPLACED