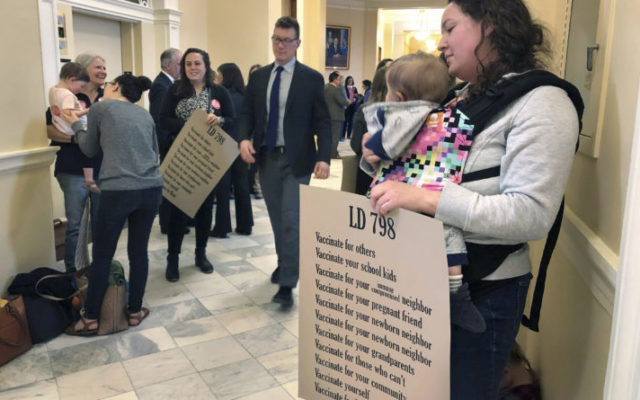 Michael Shepherd • May 2, 2019
In a pressure-packed and surprising Thursday vote, the Maine Senate endorsed an amendment by a one-vote margin that would retain a religious exemption to school vaccine requirements that could throw the passage of a high-profile bill into doubt.

AUGUSTA, Maine — In a pressure-packed and surprising Thursday vote, the Maine Senate endorsed an amendment by a one-vote margin that would retain a religious exemption to school vaccine requirements that could throw the passage of a high-profile bill into doubt.

The proposal from Rep. Ryan Tipping, D-Orono, is a response to rising opt-out rates in Maine, which had the sixth-highest opt-out rate among states for one vaccine in the last school year. As approved by the House of Representatives, it would repeal all nonmedical exemptions to school vaccine requirements, making Maine only the fourth state to have no religious exemption.

But the Senate voted 18-17 on Thursday to retain that exemption and just dump a personal exemption. Four Democratic senators — David Miramant of Camden, Erin Herbig of Belfast, Louis Luchini of Ellsworth and Jim Dill of Old Town — voted with Republicans on that.

It throws the bill into disagreement between the Democratic-controlled Senate and House of Representatives. The latter body endorsed getting rid of both exemptions last week. The bill will face further action in both chambers. The push to retain the religious exemption came from Miramant, a vaccine skeptic who helped lead opposition to Tipping’s bill.

The number of kindergartners citing nonmedical exemptions to school vaccine requirements rose from 5 percent to 5.6 percent in Maine during the current school year. The Maine Center for Disease Control and Prevention says the rising rate is endangering “herd immunity,” a threshold of vaccinated people making it difficult for contagious diseases to spread.

The bill is backed by the administration of Gov. Janet Mills, a Democrat, and members of the medical community. Democrats cited medical concerns in floor speeches supporting the bill on Thursday. The vote to retain the religious exemption effectively overrode an earlier 20-15 vote in favor of the version that passed the House. Republicans and Miramant opposed that.

“At the end of the day, this bill is about making sure our public schools are safe, healthy environments for our young people to learn and grow,” said Sen. Rebecca Millett, D-Cape Elizabeth, the co-chair of the Legislature’s education committee.

However, it faced withering opposition from hundreds at a March public hearing who cited reasons ranging from pseudoscience — including a debunked connection between one vaccine and autism — to those rooted in personal and religious freedom.

Arguments against the bill ran the gamut on the Senate floor, with most citing parental rights, though Sen. Robert Foley, R-Wells, told the story of the death of his otherwise healthy infant daughter. He said her death was attributed to sudden infant death syndrome but came after she received a vaccine that he partially blames for her death, though the U.S. government says studies have found no link between vaccination and SIDS.

For all it does to refresh us, burn energy and keep us sharp, we all need playtime, dogs and cats included. Sharing playtime with pets has the added benefit of strengthening the bond between us, so we better understand one another.
Campaign Corner END_OF_DOCUMENT_TOKEN_TO_BE_REPLACED