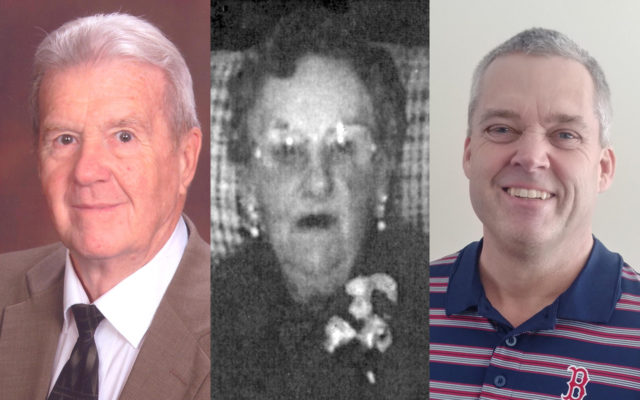 Joseph Cyr • May 5, 2019
Three Aroostook County natives are among those being inducted into the Maine Sports Legends Hall of Honors next month.

BREWER, Maine — Three Aroostook County natives are among those being inducted into the Maine Sports Legends Hall of Honors next month.

According to Susan Lougee, representative for the northern region for the Maine Sports Legends, the awards are presented to men and women for their extraordinary commitment and work behind the scenes to helping students both academically and athletically. These individuals may work in education, coaching and the community at the local and/or state level.

The three representatives from the northern region are Peter Webb, Kevin Sjoberg and the late G. Caroline Morris. Representatives from eastern Maine are William “Pop” Mangum and Steve Vanidestine; and from Central Maine, Tom Warren and Amy Vachon.

In addition, two student athletes from the County will be honored. Madison Jandreau of Presque Isle and Alex Ezzy of Caribou will receive a $750 award.

The inductees will be honored at the annual banquet in Brewer at Jeff’s Catering June 23, at 1 p.m.

Bios on the three County inductees are as follows:

Webb graduated from Houlton High School and Ricker College in Houlton. As a boy he delivered 135-140 Bangor Daily News papers a day and was also employed as a bellhop at the Northland Hotel.

Encouragement and support by his athletic mother lead Webb to play four years of basketball in both high school and college. He also excelled in baseball in high school, college, the American Legion and a semi-pro team, the Presque Isle Indians. He umpired many games in Maine and New Brunswick.

After earning his undergraduate degree, Webb taught middle school for four years. With the completion of his master’s degree from the University of Maine, Webb became a school administrator for 22 years. It was during this time that Webb became active as an official in both baseball and basketball.

By his estimate, Webb umpired more than 1,000 baseball games and more than 2,000 high school, college and professional basketball games.

Lyn McHatten, guidance director at Ashland and former assignor of basketball officials as member of IAABO, said, “Through Peter’s work with the International Association of Approved Basketball Officials, Peter established an unparalleled legacy of distinguished service. His body of work with IAABO is easily comparable to what Babe Ruth did for baseball. His attention to detail and the promotion of the idea of that the high school basketball official as a professional was an important aspect of his tenure.”

Webb has been a member of IAABO for 57 years, serving on the executive committee for 13 years and was the International Rules Interpreter and received many recognition and awards for his work.

At the state level, he served 13 years as assistant commissioner of basketball and spent the last 27 years as the commissioner.

Dick Durost, Maine Principal Association executive director said, “You look at what he has done within the state in terms of basketball and baseball; Peter is recognized as one of the best, if not the best, clinician in the country.”

Many have said that Webb’s love for the game of basketball shows when you watch him conduct a clinic.

In the community, Webb was involved in Little League Baseball in Lincoln, Houlton and Caribou. In his free time Webb has had a life-long interest and hobby in traditional country music. Webb and his wife Marie reside in Stetson and have four children, three sons and a daughter.

Kevin Sjoberg graduated from Caribou High School and the University of Maine Orono where he majored in Journalism. Sjoberg started his working career in 1988, fresh out of college, as a sports and news reporter at The Aroostook Republican and News in Caribou. In 1993 he became sports editor at both the Aroostook Republican and the Star Herald, in Presque Isle, a position he held until March of this year.

Mark Putnam, former managing editor at Northeast Publishing said, “Kevin is unique as a journalist, he can objectively cover sports, while at the same time playing an active role in his community as a concerned citizen, friend to all, and family man. It is this dual quality of being professional and personal that brings this longtime sportswriter to the top of his craft. His consistent and complete coverage of local sports, not just the score, but the personal and unique circumstances behind the headlines has served the region well and will remain an important historical record for generations to come. Kevin’s work has graced many refrigerators and scrapbooks over the years.”

Joseph Cyr, assistant editor/senior reporter for Northeast Publishing, said, “Kevin has been synonymous with sports in Central Aroostook County for many years. His professional approach to covering sporting events of all levels from peewee to college has earned him the respect of players, coaches and fans alike for generations. He always did his job with a smile on his face and I am proud to call him a colleague and more so, a friend.”

Bob White, a former teacher and official who serves as secretary of the Aroostook League, added, “Kevin’s articles were unbiased and he covered the small  schools with the same enthusiasm as the larger schools. His attending any event meant a well written article would appear in the local newspaper’s next edition. In Kevin’s retirement, the County has lost a great ambassador for sports and athletes, ages 8 through 80, who participate in these activities.”

Not only did the local newspapers benefit from Sjoberg’s sport coverage skills, but for the past 20-plus years households have listened to him on the radio or through video streaming doing play-by-play of local basketball games. He started as a color commentator for the local public access television and has since worked games for WEGP, Channel X and WHOU.

Sjoberg has received many honors and awards throughout his newspaper career. He was a two-time Maine Sportswriter of the Year through the National Sportscasters and Sportswriters Association. He was the recipient of the Maine Interscholastic Athletic Administrators Association’s Print Media Award in 2011 and won several Maine Press Association “Better Newspaper Contest” awards during his tenure.

Sjoberg is now employed as a morning host at Channel X Radio in Caribou. He is a baseball umpire and a member of the Northern Maine Baseball Umpires Association. He has served as a basketball official and softball umpire in Aroostook County in past years.

In the community, Sjoberg is a member of the Presque Elks Lodge No. 1954 and is the new director of the lodge’s Hoop Shoot program. He serves on the Presque Isle High School Athletic Hall of Fame Committee and is a former coordinator of the Aroostook Youth Basketball League.

He played slo-pitch softball in local men’s leagues for nearly 20 years and is an avid sports fan. He also enjoys cycling and hiking. He and his wife, Susan, reside in Presque Isle. They have three children — one in college and two in high school.

Morris coached girls basketball at Ashland Community High School for 10 years and took players in her own station wagon and another wagon, which was provided to her by Jimmo Bus Contractors. Her team didn’t lose a game from 1952 through 1962. Morris always stressed teamwork, recognizing the open shooter with the best opportunity to score.

In the high school yearbook, her players wrote, “We are grateful to Mrs. Morris for the never-failing understanding and patience which she has shown as our coach throughout the season. She has given very generously of her time to teach us basketball and admire her for her fairness and thoughtfulness at all times”.

Morris was famous for her baking and always brought shoe boxes of hermits and chocolate donuts on the away trips. As a guidance counselor, she helped students fill out applications for college.

Morris also organized and advised various student classes of interest, clubs and functions on the local and state level. She chaired scholarship drives and award committees for students to be given out to the ones who desired to attend college.

She was awarded Maine Teacher of the Year 1962 and was also awarded for service and appreciation by various student organizations, education associations and departments of the armed services.

Morris was a member of the Maine Teachers Association and served on several educational and legislative committees. Throughout her life she was involved in education on the local, state and national levels. Morris was also on the board of directors for the Aroostook Area Agency on Aging and the State Legal Services for the Elderly. She was a member and past Worthy Matron of OES Tillhkum Caper 99, District Deputy Grand Matron 19 OES Grand Chapter of Maine 1972

through 1974. Member and past president of Delta Chapter: Delta Kappa Gamma, member of the Ashland Area Senior Citizens Club and a member of Mobile Manor Women’s Club.

Morris was living in Ft. Myers, Florida when she died in March 1990. She was predeceased by her husband, son and granddaughter. A daughter and many of her grandchildren, nieces and nephews are still living. A scholarship in Morris’ name is awarded annually to a graduating Ashland High School student.

For all it does to refresh us, burn energy and keep us sharp, we all need playtime, dogs and cats included. Sharing playtime with pets has the added benefit of strengthening the bond between us, so we better understand one another.
Campaign Corner END_OF_DOCUMENT_TOKEN_TO_BE_REPLACED