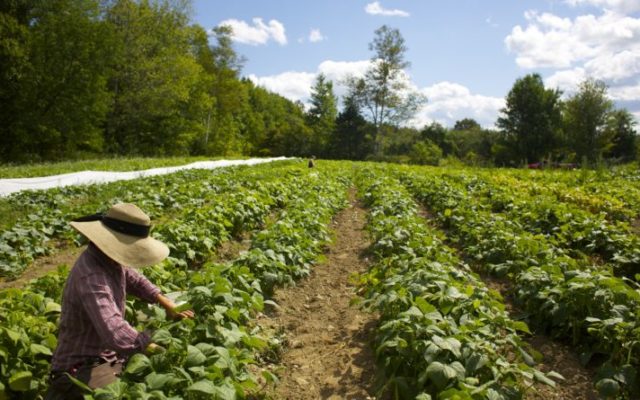 Maine is losing farms and farmland, but hope is not lost for agriculture

Abigail Curtis • May 6, 2019
In recent years, Maine’s so-called farming renaissance has been vaunted as both a hopeful spot in the state’s economy and a magnet that is drawing some young people back to the land.

In recent years, Maine’s so-called farming renaissance has been vaunted as both a hopeful spot in the state’s economy and a magnet that is drawing some young people back to the land.

But the U.S. Department of Agriculture’s most recent Census of Agriculturemakes it clear that it’s not just green pastures and bountiful harvests here. According to the 2017 census, which was released last month and which covers the years 2012 to 2017, there are some reasons to be concerned about the state of farming in Maine.

Among those concerns are:

These and other changes to the Maine agricultural landscape seem alarming to Ellen Sabina, the outreach and communications director of the Maine Farmland Trust.

“In our view, what has really struck us were those three main points … that Maine lost a significant amount of farmland and a lot of farms, and that there’s also this difficult economic condition that farmers are facing in Maine and across the country, too,” she said. “We feel that’s a call for all of us to step up and support farms now, before it’s too late.”

Both hope and gloom in the farming outlook

It’s not all gloom, fortunately. The numbers of small farms — 1 to 9 acres in size — increased slightly, as did the number of farms that are larger than 2,000 acres. Other bright spots that the Maine Farmland Trust found in the census data include a 53 percent increase in the value of food sold directly to consumers, such as at farmer’s markets or through community supported agriculture shares, from $24.7 million in 2012 to $37.8 million in 2017. As well, the total sale of organic products in Maine grew nearly 65 percent in five years, from $36.4 million in 2012 to $60 million in 2017.

And the number of young farmers in the state significantly increased once again, with farmers aged 34 and younger growing from 551 in 2012 to 1,253 in 2017. In the 2012 census, the number of farmers aged 34 and younger had grown by nearly 40 percent. The increase shown in the most recent census dwarfs that, with the number of young farmers growing by nearly 130 percent. However, the size of this change may be attributed to the difference in demographic data collection.

But even with the growth in numbers of young farmers, the average age of Maine farmers still increased according to this census, from 55.1 years old in 2012 to 56.5 years old in 2017.

The loss of farmland in Maine and the increasing overall age of the state’s farmers is a worry to Sabina and other agriculture experts, but the bright spots are hopeful, she said.

“What this is saying is that we, as consumers and people who care about Maine farms, need to be aware of the complexity and nuances and stay vigilant,” she said. “It’s really encouraging to see lots of people buying local food. There’s probably more that we can do to make sure that farms stay in farming here.”

End of the line for one Maine farm

Young farmers work the fields
Rachel Katz knows all too well the difficulties that Maine farmers face. For 10 years, she and her family ran Terranian Farm in Troy, part of Maine’s growing crop of young farmers. They used draft horses to grow organic vegetables, flowers and herbs. But in 2018, she stopped working the land, and this year has put the farm up for sale.
It was the work, which was constant. It was the financial stress, which was defeating.

All of it just wore her down.

“The realities can be crushing,” Katz said. “It’s really hard, and of course it’s really hard. Everyone knows it is and expects [it] to be really hard. But it’s totally relentless. It’s a 24-hour a day, 7-day a week job.”

Before making the change, she would pick up her kids from school, go home and harvest the crops. On weekends, they would go to area farmer’s markets to sell what they had harvested. There was not a lot of time to relax, to spend time with family or to see other parts of Maine that were neither her farm nor the market towns.

“It’s extra hard if you have a family,” she said. “Farm kids are incredibly bright and engaged, but my kids didn’t know that Maine had beaches. Last year was the first time we went hiking.”

It has been a relief for her to take a non-farm job, albeit one that is still in agriculture — she works at Johnny’s Selected Seeds in Albion. She now has health insurance and a retirement savings plan, coworkers she enjoys and more. And Katz is still hoping to be part of Maine’s agriculture community — just in a different way than she was before.

“I’d like to be able to support [farmers] economically,” she said. “Now that I’m not one of those people, I have the money to support them.”

Katz encourages others to do the same.

“Buy their food. Like, a lot of it,” she said. “And don’t balk at the price. I don’t know why, but people feel like farmers should be the hardest-working people in society and still make zero dollars.”