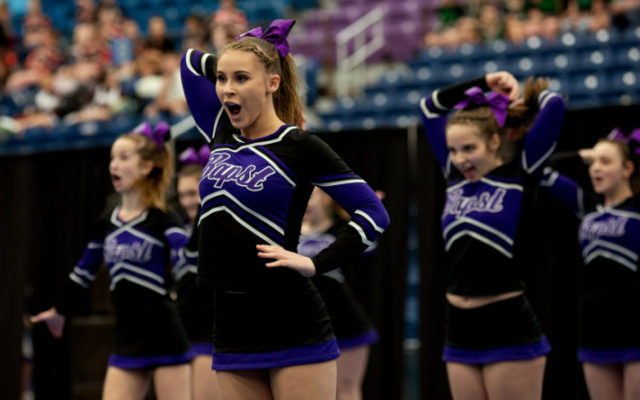 Ernie Clark • May 8, 2019
Back when sideline cheering at high school football and basketball games around Maine was the rage during the 1980s, Denise Gelinas of Biddeford helped introduce a separate, more competitive side of that activity full of tumbling, jumps, stunts, pyramids and dance.

Back when sideline cheering at high school football and basketball games around Maine was the rage during the 1980s, Denise Gelinas of Biddeford helped introduce a separate, more competitive side of that activity full of tumbling, jumps, stunts, pyramids and dance.

Today, the state high school cheering championships are among the most popular interscholastic activities sanctioned by the Maine Principals’ Association.

Gelinas and several other veteran cheering officials are working to give more traditional cheering its own stage through a competition called game-day cheering.

Instead of relying on sheer athleticism and teamwork, game-day cheering is designed to help build school spirit and engage crowd involvement in traditional cheerleading. This means using synchronized and energized cheering, chants that accompany a school’s fight song or band chant, and providing encouragement in a variety of game-specific situations — like a “Defense” cheer when the home team is trying to prevent the opponent from scoring a touchdown.

No pyramids and only standing tumbling moves are allowed, and the energy of the moment is not supplied by loud background music but the cheers themselves.

“Everything is based on motions and interactions with the crowd with signs and megaphones,” said Gelinas, a high school cheering official for more than three decades. “If you go to a competition today it has music throughout the event, but this is a little different. They actually have to do more cheerleading as opposed to moving to the music and transitioning and stunting.”

“It’s kind of going back to the old sideline cheering that we don’t see as much anymore.”

Gelinas and other veteran cheering officials such as Susan Hartnett and Steve Wright will introduce game-day cheering later this year through a pilot program called Maine Game Day.

That event, to be held at Waterhouse Field in Biddeford on Sept. 21, will include game-day cheering competition among squads that register from around the state as well as a training session related to officiating game-day competitions.

“Everyone thinks they have to be doing difficult skills for competition cheering, which is kind of based around that,” Gelinas said. “This is more basic cheer. We’re hoping that even teams that may think they wouldn’t fare well in the competitions during the winter may get involved with this because the difficulty is not required.”

Game-day cheering is a relatively new concept in high school athletics and is experiencing gradual growth around the country. Vermont and Massachusetts are two New England states that have modest programs off the ground.

“There’s been ongoing conversations,” said Mike Burnham, assistant executive director of the Maine Principals’ Association and that organization’s liaison to the MPA cheering committee. “Game-day cheering has been introduced at the national level for a number of years now, and just recently it has picked up some interest in northern New England.

“All six New England states are at least looking at it, as well as a number of other states around the country.”

One source of motivation for the Maine effort is that the Council of New England Secondary Schools Principals’ Associations met Tuesday, and among its topics for the day was whether that group might sanction a regional championship in game-day cheering like it does for golf, indoor and outdoor track, cross-country, spirit (competition cheering), dance, gymnastics, and wrestling.

Burnham said that if game-day cheering proves popular in Maine, the MPA may at some point sanction the activity.

“We’re running it as a pilot program hoping that it catches on, and then the MPA would take it on,” Gelinas said. “It’s going to be determined by whether or not the coaches pull the trigger and decide to come. We’re also pushing the fact that these competitions are game-based so coaches can take this material and use it back home at their games to get the crowd involved.

“That’s what we’re hoping happens and that it will help school spirit, but it’s based on what they want at this point.”

Only one member of Maine’s congressional delegation had come out in favor of impeaching President Donald Trump ahead of House Speaker Nancy Pelosi’s Tuesday announcement that the Democratic-led House of Representatives would begin an impeachment inquiry.
Pets END_OF_DOCUMENT_TOKEN_TO_BE_REPLACED

We think a cat can make for the best pet in the world. To truly love a cat, you must learn to accept them for what they are -- unpredictable and quirky, which is something unique and unlike any other pet.
Campaign Corner END_OF_DOCUMENT_TOKEN_TO_BE_REPLACED