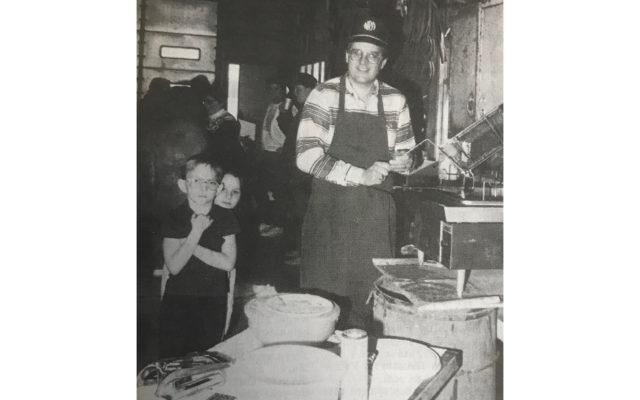 Change of location — The Home Restaurant, conducted by Mrs. Lougee, is soon to change its location. Rooms are being fitted up in the Putnam & Mansur block, over Clough & Taggett’s store. The rooms are tastefully decorated and when finished will make a most attractive place for a first-class restaurant.

Fifty years of successful business — Fifty years in the same business is a record of which any firm might well be proud, but not only in the length of time which the Geo. S. Gentle Company have been in business have they reason to feel satisfied, but the reputation they have made throughout the county for square dealing and the satisfactory settlement of all claims is a further source of gratification to Mr. Gentle as well as those who are now associated with him.

Celebrates  birthday — Willard Victory was the guest of honor at a family party held Wednesday evening at the home of Mr.s and Mrs. Henry Victory, Porter Settlement, in honor of his 80th birthday. During the social evening Mrs. Benjamin Sweet read an original poem entitled “80 Years of Living” and grandchildren presented a program of songs and readings.

Meetings in Boston — Francis Gooch, manager of Houlton and Temple Theatre, left Wednesday for Boston, where he will attend the Fifth War Loan meeting of New England Theatre Managers. Plans will be made at that time for their part in the War Loan.

To be ordained — The Rev. Richard J. Lynds, S.J., grandson of Mrs. Stanley B. Richardson of Houlton and a former Houlton resident, will be ordained to the priesthood in the Society of Jesus (Jesuits) by Most Reverend Peter L. Gerety, Coadjutor Bishop and Apostolic Administrator of the Diocese of Portland at the Cathedral of the Immaculate Conception in Portland.

Over 300 attend — Over 300 people were in attendance at the annual May Breakfast sponsored by the Free Bed and Aid Association of the Aroostook General Hospital May 1 at the Elks Club. A varied and substantial menu was served and pansies and African violets and May baskets containing home-made fudge were on sale.

Celebrate anniversary — Mr. and Mrs. George Grass of Sherman were honored on their 50th anniversary by their children at the home of Dana and Cora Lee Grass in Winterport. They were presented with a money tree, flowers and a clock by their grandchildren.

Only one member of Maine’s congressional delegation had come out in favor of impeaching President Donald Trump ahead of House Speaker Nancy Pelosi’s Tuesday announcement that the Democratic-led House of Representatives would begin an impeachment inquiry.
Pets END_OF_DOCUMENT_TOKEN_TO_BE_REPLACED

Last week, we received a phone call about a cat that was in desperate need of help. The young lady said she found a cat that was very skinny and crying and that there was blood in the snow.
Campaign Corner END_OF_DOCUMENT_TOKEN_TO_BE_REPLACED