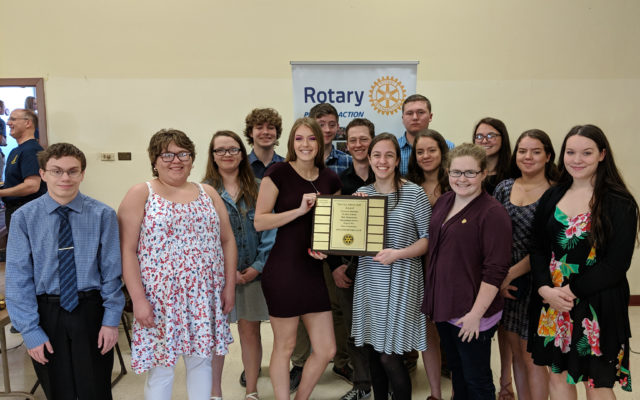 Diane Hines, Houlton Rotarian • May 15, 2019
The Houlton Rotary Club held its annual Student Recognition luncheon at St. Anthony’s Hall at the St. Mary’s Church in Houlton on Monday May 5.

HOULTON, Maine — The Houlton Rotary Club held its annual Student Recognition luncheon at St. Anthony’s Hall at the St. Mary’s Church in Houlton on Monday May 5.

Rotarian Becky Day announced that East Grand High School was selected for this 2019  Service-Above Self Award. The award is in its 21st year.

The guest speaker of the program was Rotarian Ruba Haddad Bossie. Haddad is from Jordan and she asked for a show of hands for anyone interested in a paid trip to Jordan. Not many hands went up. Haddad went on to educate everyone about her country of origin explaining that this was the group’s lucky day as they would learn the truth about Jordan and the “why not?” answer to travel to Jordan.

For starters Haddad spoke about whether or not Jordan was safe and she showed slides to support her truth that it is probably the safest place to visit as it hosts the world’s largest refugee camp. The Royal Family has descended from Mohammed. Jordan’s Special Forces have trained with Americans and many movies are filmed in the deserts of Jordan.

She explained that Jordan is not really a very rich country but it does export potash and the population is known to be very intelligent. The country is bilingual and English is taught beginning in the fifth grade and residents love to practice their English on tourists.

The religion practiced is mostly Muslim with 5 percent of the population being Christian. The country may be 70 percent desert, but no one really lives in the desert. The country is the size of Maine, so it is easy to get around in a day.

Haddad addressed the notion that Jordan is too hot when actually there are four seasons and even snow in the winter. White clothes are a definite for visiting the desert, but most folks wear clothes similar to American dress.

The notion that all the residents live in tents and ride camels is not true as cities have buildings made of stone. There are no wood structures, however, and there are plenty of cars. Jordanians eat with their hands as utensils are not used during special holidays.

In summing up Haddad asked again for a show of hands for those who would like to visit her country and almost every hand went up in the room.

For all it does to refresh us, burn energy and keep us sharp, we all need playtime, dogs and cats included. Sharing playtime with pets has the added benefit of strengthening the bond between us, so we better understand one another.
Campaign Corner END_OF_DOCUMENT_TOKEN_TO_BE_REPLACED