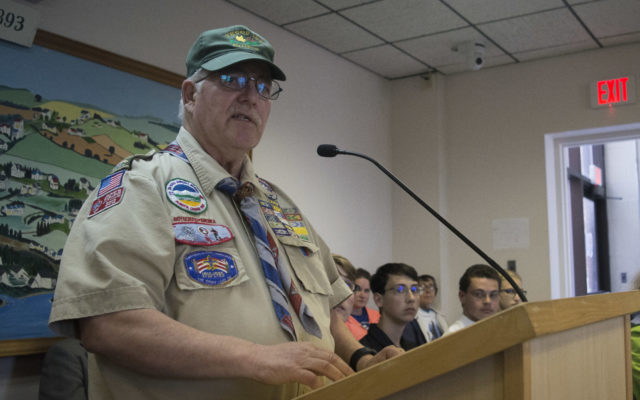 He made his comments during the council’s meeting on May 13.

Keaton said that, as a youth, he recalled traveling to Presque Isle on a treacherous road with drifts so severe that state officials had to intervene and cut drifts that resulted in walls “going up higher than our vehicles.” He said the problem was solved once trees were planted along that roadway.

Keaton, who lives on South Main Street, posed the same solution for his street where he said he runs into hazardous driving conditions caused by drifting snow every winter.

“One year I almost hit a plow,” he said. “Another time I almost rear-ended a vehicle in front of me, and one time a vehicle almost hit me coming from town toward my place.”

He said that, on another occasion, snow drifts had hindered his vehicle to the point where he had to drive in the left lane and “hope nobody was coming so I could get into the clear.”

He said he’d heard that during one storm an ambulance and a fire truck had become stuck on the roadway due to the drifting snow, causing the public works department to stop everything they were doing and help them to safety.

“All these years,” Keaton said, “we’re fortunate that nobody has been killed there.”

He then suggested planting “three or four rows of trees” along the road to cut down on snow drifts, adding that he would like to see the council work with the public works department and the landowner to “come to an agreement.”

While he was aware that the city likely “wouldn’t reap the benefits right away,” Keaton felt it would be a worthwhile endeavor.

Keaton, who is a scoutmaster for the local troop, said he could even get the Boy Scouts to lend a hand in the planting process.

“It makes me wonder,” he said, “do we do anything after somebody is killed, or do we do something about it now, before a tragedy happens?”

He concluded by saying that he’s putting the matter in the council’s hands, and that he would like to see something done on the road “in the interest of public safety.”

Councilors did not have any questions or comments following Keaton’s explanation. Mayor Mark Goughan thanked him for his time and said that the city would take his suggestions under consideration.

For all it does to refresh us, burn energy and keep us sharp, we all need playtime, dogs and cats included. Sharing playtime with pets has the added benefit of strengthening the bond between us, so we better understand one another.
Campaign Corner END_OF_DOCUMENT_TOKEN_TO_BE_REPLACED