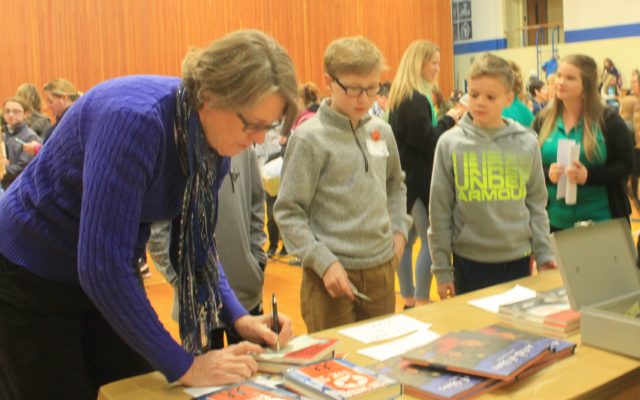 Anthony Brino • May 15, 2019
Maine author and illustrator Anne Sibley O'Brien told a group of Aroostook County elementary and middle school students that they should tell stories about their home and what they learn about the world.

PRESQUE ISLE, Maine — Maine author and illustrator Anne Sibley O’Brien told a group of Aroostook County elementary and middle school students that they should tell stories about their home and what they learn about the world.

“There’s not anywhere near enough literature that comes from Maine’s northern counties,” Sibley O’Brien said at the Young Authors Conference held at the University of Maine Presque Isle.

Approximately 220 students in fourth-through eighth grade and parents attended the conference Tuesday, which was organized by the Aroostook Right to Read Council.

Alexis Sirois, second-grade teacher at Van Buren Elementary School and president of Aroostook Right to Read, said the group organizes the conference and other events, such as “Stop Drop and Read,” to promote literacy among Aroostook County’s youngest citizens.

The conference, which brought in students who won top places in an annual writing competition, featured Sibley O’Brien as a guest speaker and workshops on themes such as illustration and the power of language, Sirois said.

Sibley O’Brien, who lives on Peaks Island and spent the last week visiting Aroostook County schools, told the students stories about the influences in her life and career, which included the writing and illustration of more than 30 books.

Originally from New Hampshire, Sibley O’Brien grew up in South Korea, where her father worked as a doctor with the Presbyterian Church.

“I didn’t know it at the time, but that was the moment when I was given my material for life,” Sibley O’Brien said. “I gradually became passionate about human differences, about the beauty and glory and sometimes puzzle of our different ways of living…We are all one human family, despite our differences.”

While the young New Englander stood out in South Korea, Sibley O’Brien said she was welcomed by Koreans and learned much in her time there.

“I was able to learn so much about traditional Korean life, the way people had been living for hundreds of years. I was also able to witness the extraordinary changes that took place over the 20 years that Korea was our home.”

As she started her career as an author and illustrator, Sibley O’Brien said she came to view the creative writing process as a way of learning. She urged the students at the conference to see writing as a way “to discover your own world” and “tell stories about your world here in The County.”

Sibley O’Brien took the students through the creation process of several of her books including “A Path of Stars,” a 2012 children’s book featuring the story of a Cambodian American refugee family living in Maine.

The book was commissioned by the Maine Humanities Council as part of an effort to increase the representation of New Mainer communities in arts and culture. The book tells the story of a Cambodian family who fled the Khmer Rouge dictatorship in Cambodia, and the relationship between generations as cultural traditions are passed down in a new country.

Sibley O’Brien said she worked with members of the Cambodian American community in Maine to draw on their experiences, with older generations who fled war in the 1970s and younger generations who came of age in two cultures.

“I tried to marinate myself in Cambodian culture” by reading and talking with Cambodian Mainers, but she struggled. At one point she told herself, “I have no idea what I’m doing. Who am I to undertake this?”

Eventually, she took ideas to paper, “writing about what could become the story.” Finally at home, she had an idea for a start to the book: “A girl in a garden, with a rose and tomato, and that was the actual beginning of the story.”

Sirois of Van Buren said she hoped that Sibley O’Brien’s experiences would resonate with the young readers and writers in the audience.

She also said that she sees firsthand the literacy struggle today, with young people increasingly spending time with a litany of technology, from smartphones to videogames.

At the same time, Sirois said she’s optimistic about engaging both the enthusiastic and reluctant readers in schools by drawing on the large variety that exists in literature.

“A lot of it is starting young and enjoying reading and writing. In my class, I teach younger students, and I have them read and write about anything. That way they’ll enjoy it.”

For all it does to refresh us, burn energy and keep us sharp, we all need playtime, dogs and cats included. Sharing playtime with pets has the added benefit of strengthening the bond between us, so we better understand one another.
Campaign Corner END_OF_DOCUMENT_TOKEN_TO_BE_REPLACED