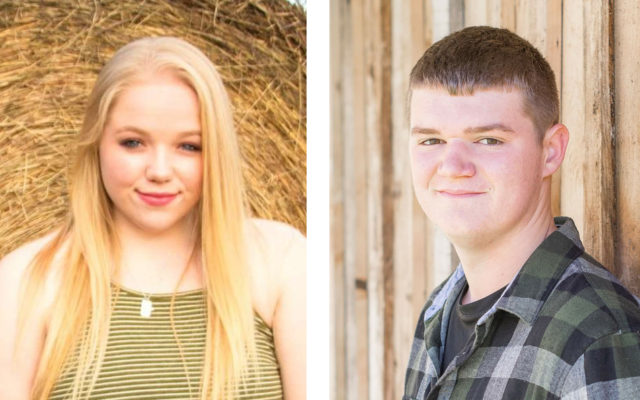 Contributed • May 15, 2019
Katahdin High School Principal Marie Robinson announced May 13 that John McNally is the 2019 class valedictorian, while Alyssa Barylski has been named salutatorian.

McNally, the son of James and Alicia McNally, plans to attend Northern Maine Community College in Presque Isle and pursue a degree in Water Treatment Technology. He is a member and president of the National Honor Society and student council. McNally has participated in basketball, baseball, volleyball and band. He was also the captain of the basketball and volleyball teams in 2018.

Barylski, the daughter of Almon and Tammy Barylski, plans to attend the University of Maine in Presque Isle and pursue a degree in liberal studies. Baryliski has participated as manager for the boys basketball and JV girls basketball teams. She participated in JV and varsity basketball. Barylski has been the manager of the school play, school musical, and has also been a member and the editor of the school newspaper. She is a member of student council and National Honor Society. She has volunteered for Bike Maine, Prom Committee, Green Valley Volunteer, Peer Editor, and Sherman Old Home Days.

The following students are honor students of the Class of 2019 listed in alphabetical order.

Anthony Chaloux is the son of David and Joni Chaloux. He plans to attend Northern Maine Community College and major in Water Treatment Technology. Chaloux has participated in varsity baseball and volunteered as a junior firefighter and with Hayes’ Towing.

Lindsay Drew, daughter of Keith and Cindy Drew, plans to attend the University of Maine in Presque Isle and major in criminal justice. Drew participated in varsity soccer and softball for four years and was captain of the soccer and softball teams. She earned All-Aroostook League Awards in soccer in 2016 and 2017 and softball in 2017 and 2018. Drew also earned Senior All-Star Soccer Team in 2018.

Abigail Jordan, the daughter of Tammy Jordan, plans to work after graduation. Jordan has participated in chorus, art and drama for three years. She is a member of the Art Club, Drama Club, and participates in the art shows. Jordan won the Principal’s Award for her art. She has participated in the KMHS Afterschool Drama Program.

Hannah Kyllonen, the daughter of Jeremy and Carrie Kyllonen, plans to attend Central Maine Community College and major in medical coding and electronic health records certification. She participated in basketball, soccer and has been manager of the softball team. She was on the Senior All-Star Basketball team in 2019. Kyllonen volunteered at Katahdin Elementary School with the preschool class.

Erin Lake, daughter of Mark Lake and Lori Savage, plans to go to Husson University and major in physical therapy. She participated in softball, and soccer. Lake was on the All-Aroostook Team for soccer in 2016-2018. She is a member of the student council. Lake has been a volunteer at the Katahdin Valley Health Center, blood drives, and local dinners.

Haley Landry, the daughter of Jake and DeAnn Landry, plans to work after graduation. Landry participated in soccer and varsity basketball and has managed the softball team. She was the captain of the girls basketball team her senior year. Landry was yearbook editor her senior year. She is a member of the National Technical Honors Society and student council. Landry has been a volunteer for Wreaths Across America.

Madison Landry, the daughter of Jeremy and Samantha Landry, plans to go to Washington County Community College and major in commercial and residential electricity. She participated in basketball, softball and soccer. She was a member of student council and National Technical Honor Society. She also participated in Skills USA with Region 2. She is a member of her youth group and has been a volunteer for Wreaths Across America.

Alexis Lane, the daughter of Clay Lane and Kristin Lane, plans to attend the University of Maine at Augusta and major in veterinary technology. Lane has participated in basketball, soccer and volleyball. She has also managed the boys’ soccer and baseball teams. Lane earned the All-Tournament Team in volleyball in 2019. She has been a volunteer with the small sports programs for grades 3-8 for soccer and basketball.

Eden Moody-Kay, the daughter of Danette Moody-Kay, plans to attend the University of Maine in Orono and major in elementary education. Moody-Kay was class secretary for 2016-2018, treasurer from 2017-2018, and was a member of the student council. She has volunteered at the Mountain Heights Health Care and food drives at Katahdin Schools and Patten Pentecostal Church.

Guy Rogan, the son of Guy and Bethany Rogan, plans to work after graduation. Rogan has been an intern with the technology department at KMHS from 2017-2019.

Lauren Somers, the daughter of Kevin and Kelly Somers, plans to attend New Brunswick Bible Institute and major in Biblical/Theological Studies. Somers managed the girls’ basketball and soccer teams. She is a member of the National Honor Society. Somers participated in the art show and won first place for her age group in 2018. She participated in Old Home Days Art Show and has won first place in her age group for the past four years. Somers also is a volunteer at her church for VBS, Youth Group and Children’s Ministries.

Evan Tapley, the son of Jerry and Denise Tapley, plans to attend Washington County Community College and major in Law Enforcement with a specialty in conservation law. Tapley also serves in the U.S. Army Reserves. He participated in soccer, basketball, volleyball and baseball. He was voted Aroostook Scholar Athlete. Tapley was a volunteer at the Fiddlehead Festival and for the Sherman Library.

Paul Young, the son of Todd and Chassity Young, plans to work after graduation. He participated in varsity basketball and also worked outside of school with a job at Hogan Tire as a tire technician.

For all it does to refresh us, burn energy and keep us sharp, we all need playtime, dogs and cats included. Sharing playtime with pets has the added benefit of strengthening the bond between us, so we better understand one another.
Campaign Corner END_OF_DOCUMENT_TOKEN_TO_BE_REPLACED