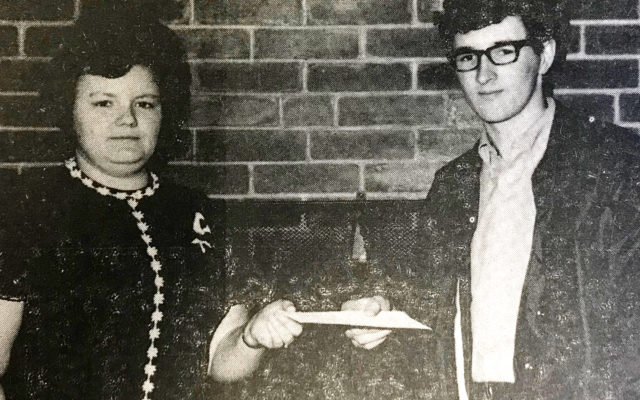 Contributed • May 22, 2019
115 Years Ago - May 13, 1904 New equipment — The Houlton Business College has added to the equipment of the Shorthand department a new Edison phonograph for dictation purposes.

New equipment  — The Houlton Business College has added to the equipment of the Shorthand department a new Edison phonograph for dictation purposes. The machine is a tireless dictator and enables the teacher to examine the outlines made giving hints to the student without waste of time. All former students, or anyone wishing to increase their speed, are invited to test the work of the machine at any time.

Advancement — F. P. Tinker, for several years agent at the C.P.R. depot, has been advanced to the office of freight solicitor for the Company. The former solicitor, Jno. Stewart of Woodstock, is on a three months’ vacation on account of poor health.

Accepts new position — Albion Stewart, a former employee of the A. and P. Co., has accepted a position in the Sheriff’s Department. He will assist at the County Jail and do routine deputy work.

Buying trip — Mrs. Sarah Trickey left Wednesday morning for the Boston markets, where she will buy for the Linen Shop. She will also visit her cousin, Mrs. Edwin Leach, in Providence, R.I.

Art display — Nearly 400 paintings done by students at St. Mary’s School have been on display at St. Anthony’s Hall. The artwork was done by members of all eight grades at the school, who were instructed by Hugh Taylor, a student at Ricker College.

Earns certificate — James Bezanson, Customs inspector at Monticello, was presented with a certificate of training by Gilbert A. Chaisson, deputy collector of Customs in Houlton. Mr. Bezanson earned the certificate for completion of a Customs Inspector Training Course at New York City from Feb. 4-28. Mr. Chaisson made the presentation on behalf of Miss Lucia Cormier, district director of Customs.

Retiring — An employee appreciation luncheon was held at the University of Maine at Presque Isle on May 9. President W. Michael Easton addressed the group and recognized employees for achieving certain career milestones. The luncheon also honored Dr. Raymond M. Sylvester of Houlton on the occasion of his retirement. He was presented with a university rocking chair. Dr. Sylvester, associate professor of chemistry, has been employed with the University for 21 years.

Just when we thought we were out of the woods with kitten season, it has hit full force.  The past few days have been difficult answering the phone and hearing the stories of why people have litters of kittens they need to surrender.
Campaign Corner END_OF_DOCUMENT_TOKEN_TO_BE_REPLACED