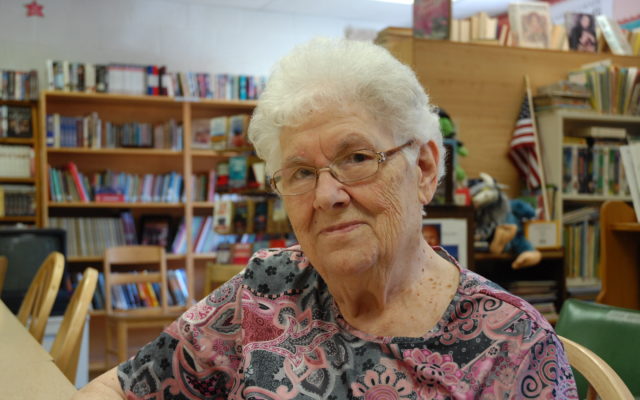 Jessica Potila • May 27, 2019
The day before she passed away at 94 years old on Thursday, May 16, Faye O’Leary Hafford made plans to work at the library she founded in her beloved hometown of Allagash.

ALLAGASH, Maine — The day before she passed away at 94 years old on Thursday, May 16, Faye O’Leary Hafford made plans to work at the library she founded in her beloved hometown of Allagash.

That was not to be, but the legacy of O’Leary Hafford’s good works over the course of nearly a century of life would be difficult to match.

Until her very last breath, O’Leary Hafford maintained a sharp mind and dedication to serving others. A retired teacher and prolific author, O’Leary wrote more than 20 books, mostly pertaining to Allagash life. Among her most popular titles are “Waterway Wanderings: A Story of the People in the Allagash Wilderness Waterway” and “Orphan Dreams.”

Although born in St. John, she had said she spent the best years of her life living in the logging town of Allagash, located deep in the northern Maine woods.

O’Leary Hafford said during an earlier interview that she first began writing to ease a nervousness that accompanied social interaction.

“I was very shy when I was young, so instead of talking to people I’d write things down. That’s where it originated. After awhile, I came up here, [and] did articles all the time. After, I wrote a book here for the Allagash Centennial. I tried to find information on the centennial but nobody had anything written down. They tried to tell me things about the Allagash and I said, ‘From now on it’s gonna be written down.’ I wrote about the logging and I wrote about the flood. I talked to people and I wrote it just like they told me. It worked out pretty well,” she said.

Bangor Daily News reporter Julia Bayly interviewed O’Leary Hafford on multiple occasions, and in one story appropriately deemed her “The Matriarch of Allagash.” 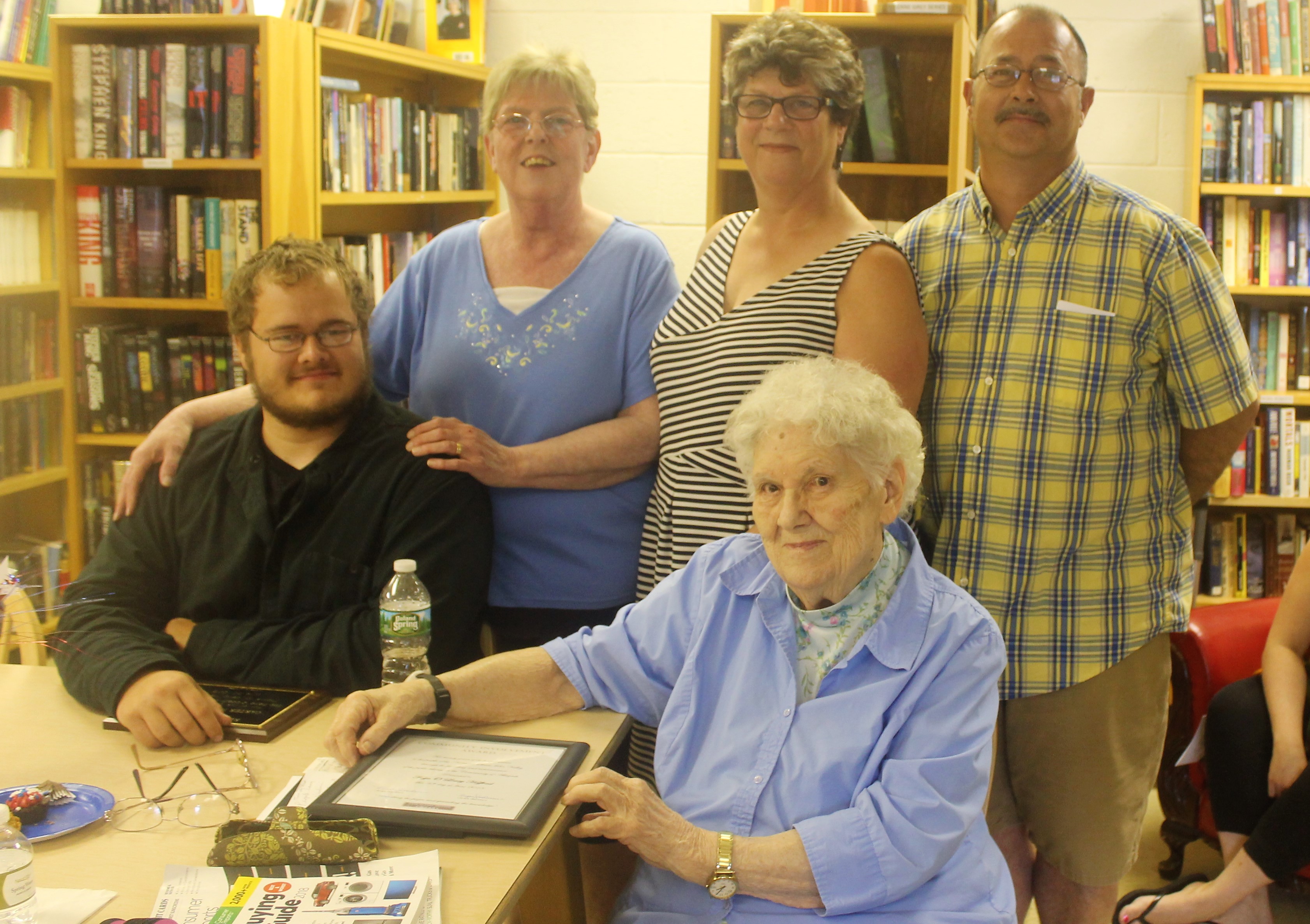 “For me, Faye Hafford was and always will be synonymous with Allagash. I have a deep affection for Faye. I will miss her very, very much. I had the pleasure of interviewing her for numerous stories from floods to fires, from lumber camps to escaped bison,” Bayly said. “She was always ready to talk about the place she called home and it was always clear how much she loved Allagash. If there was anything you needed to know, she was the go-to woman.”

After her passing, O’Leary Hafford’s great-great nephew Chace Jackson wrote a heartfelt tribute to her on his Facebook page which adequately described her connection to Allagash.

“It is not that the word Moosetowner had not already been linked to Allagash people for a century by the time she first felt the courage to write about it, or that Allagash did not already feel distinct. But what Faye did was give this phenomena words, language, context, the parameters it could legitimately be understood within. She was the first of us to say that our unique identities were part of a natural occurrence in the human experience and thusly deserved respect. That meant respect from those who were not Moosetowners. But it also meant respect for ourselves and for one another,” Jackson wrote.

“Aunt Faye believed in us as a clan of sorts, a people who would never have anything like they had in each other. That is why we cannot remember a bad word she ever said. If she ever spoke one, she regretted it. She loved her clan, and it loved her. She was its greatest warrior and insuperable in battle because she never went to war.”

After retiring from a 25-year teaching career, O’Leary Hafford worked as a receptionist at the Michaud Farm ranger station on the Allagash Wilderness Waterway, where her late husband, Lee Hafford, worked as a forest ranger.

Life tucked away on the Allagash waterway was anything but boring, according to O’Leary Hafford.

“On the waterway we met a lot of people. The governor of Maine came down with his children and grandchildren. I met a girl, one of Robert Kennedy’s daughters, and I met people who wrote books and stuff like that. I met some from New Zealand and Australia and Italy and Ireland there … I sold quite a few books to them, so my books are all over the world,” she said.

In 1998, Faye founded and ran a community library in Allagash which is named in her honor. For more than two decades, she volunteered at the Faye O’Leary Hafford Library, and sought grants and held fundraisers to keep the library afloat.

“I’m hoping there will always be books. There’s nothing like holding a book in your hands, and I hope that doesn’t change,” she said during an interview.

Before earning her teaching degree from the University of Maine in 1949, O’Leary Hafford worked at a factory, where she also made a difference in the lives of those around her.

She became involved in a union committee that made important gains in rights for the factory’s employees, including paid time off and two weeks vacation each year.

“I was that kind of person; I wanted to do something to help,” she said.

Over the years O’Leary Hafford won many awards for her efforts to better the community, including the MEA-Retired Leadership Award for the Aroostook Retired Educators Association; WAGM-TV Aroostook County All-Star; Calendar of Aroostook Women, Maine Teacher of the Year for Social Studies; Woman of the Year from both Fort Kent and State of Maine Business and Professional Women’s Clubs; and the New England Patriots Education and Community Award.

However many awards O’Leary Hafford earned during her lifetime, she considered her greatest achievement to be her marriage for 44 years to Hafford, and raising the couple’s two children, Randi Hafford Jandreau and Michael Lee Hafford, who passed unexpectedly in his sleep of natural causes in 2010.

During an interview at a party celebrating her 90th birthday, O’Leary Hafford explained this.

“Coming up and marrying my husband and having those two kids, that was the best part of my life right there. I had a wonderful husband, a good husband. He was good to our kids, good to other people’s kids. He was just a nice, nice man. He died young too. He was 68. We had the wake on our 44th anniversary. Those were 44 good years.”

Faye O’Leary Hafford was laid to rest at St. Paul’s Congregational Cemetery in St. Francis where she shares a headstone with her husband.

Maine is more than eight months into Medicaid expansion under the federal Affordable Care Act and trends around who is enrolling and where they live are starting to emerge, bucking some expectations and pointing out access challenges.
Pets END_OF_DOCUMENT_TOKEN_TO_BE_REPLACED