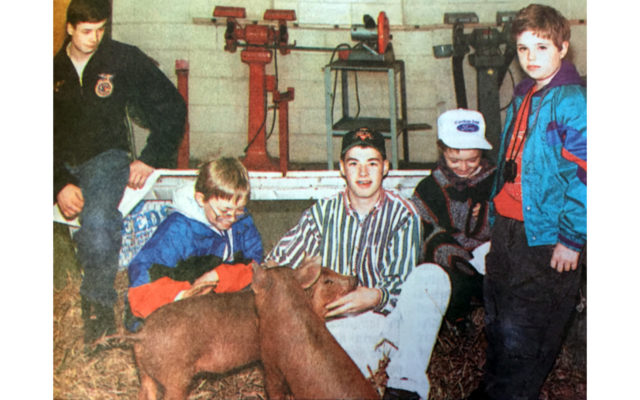 Escaped injury — Mrs. Farrell mother of Eben Farrell, fortunately escaped serious injury last Thursday night during a thunder shower. The house was struck by lightning and badly damaged. Mr & Mrs Howes were knocked unconscious. Mrs. Farrell had retired for the night and while much that was around her was torn to fragments she was unharmed.

Train track culprit — Thursday afternoon of last week the Caribou passenger train on the A.V.R. coming toward Presque Isle ran into a pickaxe which had been stuck to a tie between the rails. Hearing a grinding noise, the conductor stopped the car. Looking ahead he saw two sleepers which had been placed on the tracks. The culprit has not been found.

Fishing film –Mr L.D. Bearce showed moving pictures on ‘Life on the Allagash’ at the weekly meeting of the Caribou Rotary Club yesterday. The technicolor film, taken by Mr. Bearce showed a fishing trip in the Allagash region. Several of the Rotary members were shown in the film. Not only did the film show many beautiful rivers, lakes and catches of fish, but several scenes of lumbering. Guests were Rev. Thomas Cornish, Sgt. George Raymond, Caribou; Verne Beverly of Presque Isle, Cpl. Kenneth Norton of Caribou and Frank Hussey of Presque Isle.

Forty years — Forty years ago Memorial Day weekend a young fellow named Reg Roderick and his wife started a business known today as Roderick’s Camera Store. They were entirely on their own and Reg recalled the other day as he noted his 40th anniversary in the business community that his very first customer was Mrs. Ralph Scott. Mrs. Scott brought into the shop 11 negatives. She paid 45 cents for her order a few days later. The result of their hard work, it is noted by their daughter, Mrs. Frances Soderberg, “has provided photographic records for many thousands and those yet to be treasured by upcoming generations.” Among the pictures taken over the years, Reg recalls, were such notables as Mrs. Franklin Roosevelt, President Richard Nixon, Bing Crosby and Ted Williams.

Cancer Crusade nets $421 — Limestone’s Cancer Crusade Committee, Mrs. Magaret Webb, assisted by co-captains, Mrs. Margaret Caronth and Mrs. Bernice Kelly, also the treasure, Mrs. Matti McCormack, express appreciation to all solicitors, all those who donated funds, and those who donated to the supper. They include Cyr Brothers, Goldings IGA, Sampsons, Grants and Guimond’s all of Caribou. Leroy Gammon of Gammons Foodliner, Norma Gagnon and Stephen McCormack all of Limestone. Limestones campaign was again very successful this year, netting the amount of $421.26 the committee said.

29 in River Run — Twenty-nine crafts were entered in the 14th annual Madawaska River Run sponsored by the Stockholm American Legion Sunday, May 22. With blue skies, sunshine and warm temperatures, the day was certainly one of the best ever for canoeing down the river. The winners in the six categories were Neal Sleeper and Ryan Thibodeau with a time of one hour, nine minutes, and ten seconds for the 17 foot 6 inch and two-man classification: Tim Cushman with a time of 51:59 for the solo, recreational category: Brent Johnson and Betty Gallagher, 1:04.56 for the mixed recreational class, Fran and Carol Cyr with a time of 57:21 for the mixed non-recreational class;  and Judy Corey and Vera Stambrook with a time of 1:16.01 for the canoe of any size being propelled by two women category.

Only one member of Maine’s congressional delegation had come out in favor of impeaching President Donald Trump ahead of House Speaker Nancy Pelosi’s Tuesday announcement that the Democratic-led House of Representatives would begin an impeachment inquiry.
Pets END_OF_DOCUMENT_TOKEN_TO_BE_REPLACED

Last week, we received a phone call about a cat that was in desperate need of help. The young lady said she found a cat that was very skinny and crying and that there was blood in the snow.
Campaign Corner END_OF_DOCUMENT_TOKEN_TO_BE_REPLACED