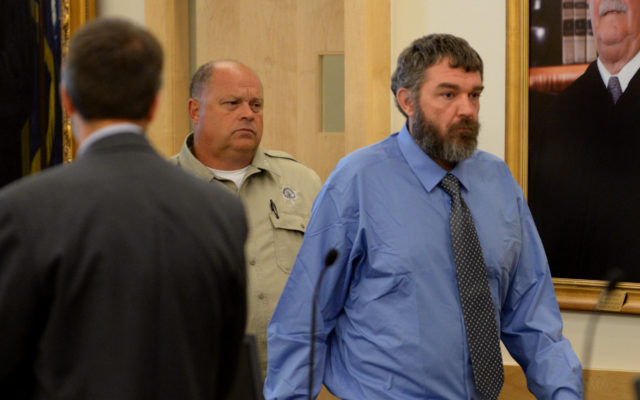 Judy Harrison • May 30, 2019
In addition to shooting five people and assaulting a sixth, Lord also set fire to a barn, stole firearms from a Silver Ridge Township home and beat a man there after tying him to a chair.

The life sentences imposed on the man who killed two men and wounded three other people in a 2015 rampage were upheld unanimously by Maine’s highest court Thursday.

Anthony Lord, 39, of Crystal claimed that Superior Court Justice Ann Murray did not give enough weight to the mitigating factors in his case, including the death of his infant son 2½ months before the shootings.

But justices on the Maine Supreme Judicial Court, who heard arguments in the appeal in September, disagreed.

“Contrary to Lord’s argument, [Murray] did not overlook the mitigating factors, including Lord’s genuine love for his son, his post-traumatic stress following his son’s death, the support of his family, and the fact that he took full responsibility for his actions in pleading guilty,” Chief Justice Leigh I. Saufley wrote in a 22-page opinion. “The [judge] committed no error in concluding that those mitigating factors simply were not enough to reduce the murder sentences from life in prison.”

Lord pleaded guilty in July 2017 to murdering Kyle Hewitt, 22, of Benedicta and Kevin Tozier, 58, of Lee; shooting and wounding Kim Irish, 57, Clayton McCarthy, 57, and Carlton Eddy, 52, all of Benedicta; and assaulting Kary Mayo, 40, of Silver Ridge with a hammer.

Lord blamed his two-day rampage in Penobscot and Aroostook counties on the loss of his 6-month-old son Larry Earl Lord, who died May 7, 2015. Lord, who was suffering from post traumatic stress disorder, was frustrated by the fact that the investigation into his son’s death was taking so long, his lawyer told the court.

In addition to shooting five people and assaulting a sixth, Lord also set fire to a barn, stole firearms from a Silver Ridge Township home and beat a man there after tying him to a chair.

Most of the crime spree occurred with police trying to catch up with Lord as he raced through several Aroostook and Penobscot county towns on July 16 and 17, 2015. The manhunt finally ended when he surrendered at the home of an uncle in Houlton.

At the time of his sentencing, Lord had a long criminal history, including a conviction for an assault on a corrections officer at Penobscot County Jail after his arrest for the rampage. He also was a lifetime registrant of the Maine Sex Offender Registry.

Lord faced between 25 years and life on the murder charges alone. His attorney, David Bate of Bangor, recommended a sentence of 40 years.

Maine does not have a death penalty, but Superior Court justices may impose life sentences for murder in specific circumstances. There is no possibility for early release.

Just when we thought we were out of the woods with kitten season, it has hit full force.  The past few days have been difficult answering the phone and hearing the stories of why people have litters of kittens they need to surrender.
Campaign Corner END_OF_DOCUMENT_TOKEN_TO_BE_REPLACED