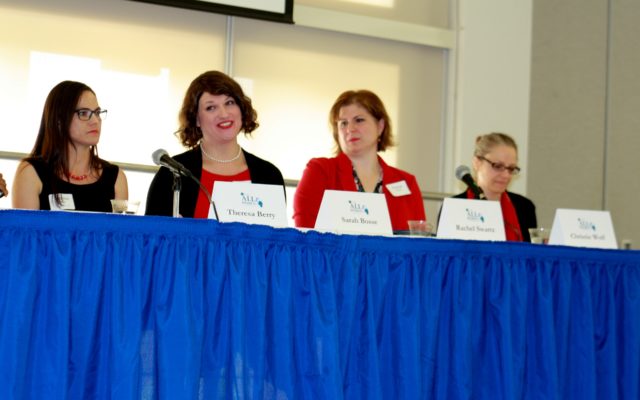 Melissa Lizotte • June 2, 2019
A group of women shared personal stories of adversity and success in hopes of inspiring others in Aroostook County to embrace their full potential during New Ventures Maine’s eighth annual ALL for Women conference held Friday, May 31.

PRESQUE ISLE, Maine — A group of women shared personal stories of adversity and success in hopes of inspiring others in Aroostook County to embrace their full potential during New Ventures Maine’s eighth annual ALL for Women conference held Friday, May 31.

The conference, held at the University of Maine at Presque Isle, brought together 120 women from various professional and personal backgrounds, including four who made up a special leadership panel: Theresa Berry, Sarah Bosse, Rachel Swartz and Christie Wolf.

ALL for Women focuses on giving women opportunities to network, learn from one another’s experiences and gain confidence in their leadership abilities.

Panel moderator Shawn Cunningham began the panel by asking about a pivotal moment that occurred in each of the women’s lives, and how that moment changed the direction of their journeys.

Rachel Swartz, an obstetrics and gynecology specialist for Northern Light A.R. Gould Hospital, spoke about what she now calls her “second birthday” several years ago.

“In October 2016, I attempted suicide,” Swartz said. “I’d struggled with depression for over 20 years and I got to a place where I never want to go again.”

Gaining a second chance allowed Swartz to realize how many people loved and supported her, and led to her leaving an emotionally abusive marriage. She recalled initially feeling guilty at the thought of putting her two sons through the struggles of a divorce. Many times she would think of herself as a “failure.”

But over time, Swartz realized that she needed to change her life not just for yourself but for her children. 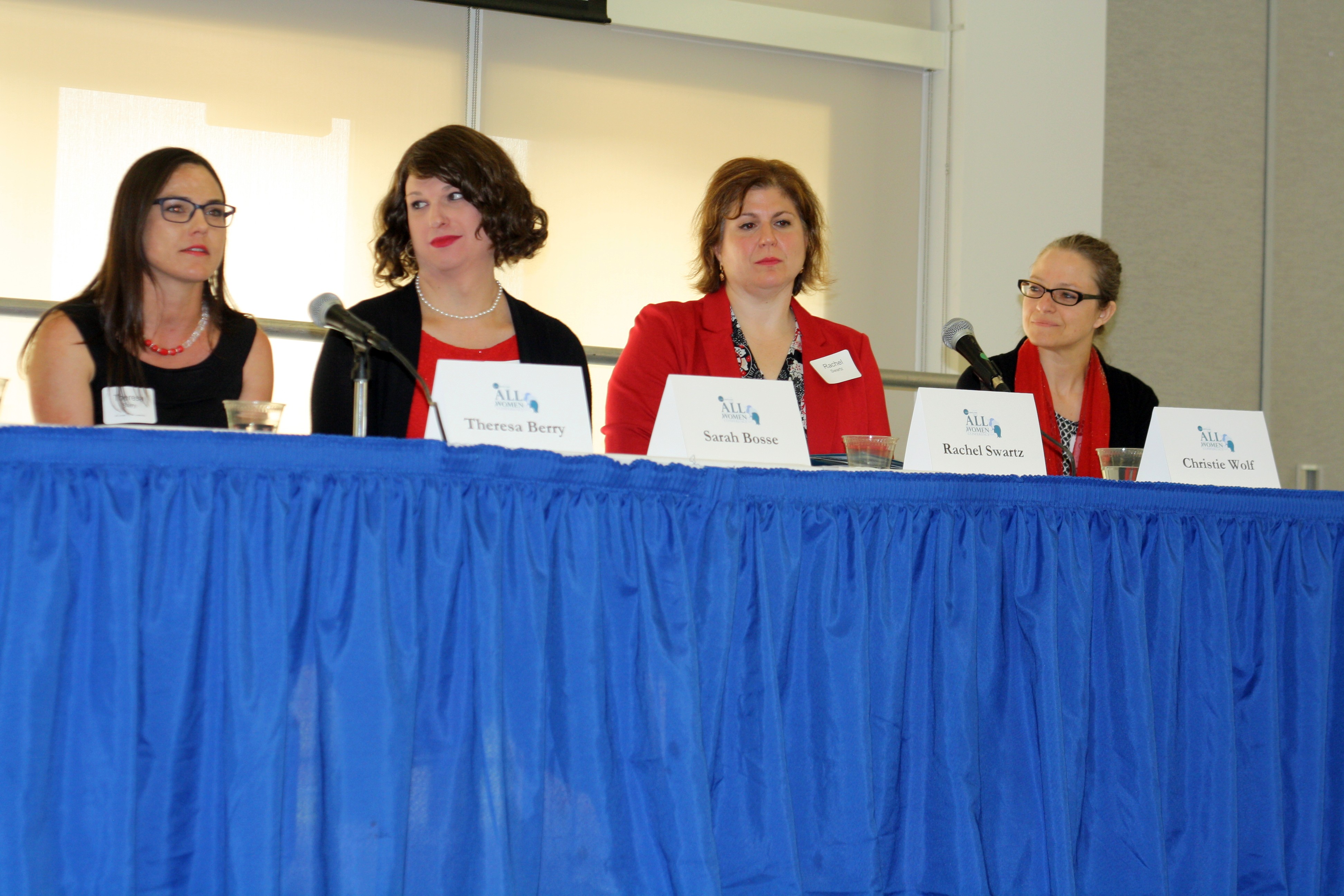 Theresa Berry (far left), owner of Miss Theresa’s Daycare in Patten, speaks about her struggles as a single working mother during New Ventures Maine’s ALL For Women conference on Friday while fellow panelists (from left to right) Sarah Bosse, Rachel Swartz and Christie Wolf look on.
(Staff photo/Melissa Lizotte)

“In my work I meet a lot of women and I remember one told me that she was grateful that her parents divorced because they were happier and she was, too. Another told me she wished her parents had divorced,” Swartz said. “I was most worried about my kids but I learned to tell myself, ‘It’s okay, you’re still going to be a good mom.’”

One of the biggest challenges for Sarah Bosse, program analyst for MMG Insurance, was beginning to live openly as a transgender woman.

Bosse, who now lives in Houlton, grew up in the Lewiston/Auburn area and worked as an educational technology consultant before moving to northern Maine with her family five years ago. She had begun learning about the process of transitioning from male to female in her early 20s, but it was not until three years ago that she began to embrace that identity.

Bosse credits the support she has received from her 12-year-old daughter, parents and co-workers for helping her live a life that is most true to who she is as a person.

“My dad is probably the person who has inspired me the most,” Bosse said. “Growing up he was always the most patient person and he would say, ‘Live life to the fullest’ and ‘Do what makes you happy.’ I think he has seen more and more everyday that I’m happy being who I am.”

Personal happiness was something that Theresa Berry of Patten struggled to achieve when she found herself in the midst of a divorce while pregnant with her third child.

She moved to Maine to be closer to her mother and in 2017 completed New Ventures Maine’s Venturing Forth class, a 12-week business planning course. She now owns and operates Miss Theresa’s Daycare in Patten.

As a single working mother, Berry said, she has often felt exhausted from the pressures of balancing work and family life, and has blamed herself for mistakes and setbacks. Although she is still unsure of where life will take her, Berry is more willing now, thanks to the support of her mother and other working women she knows, to embrace everyday challenges.

“I’ve had to retrain my mind to not be too hard on myself,” Berry said. “I tend to think of success as just doing my best. Life is always going to keep throwing challenges at us and we’ll just keep pressing forward.”

Like Berry, Wolf was pregnant when she was thrown into a major personal and professional change. In 2008 she was a manager for a commercial shopping center in Tennessee when the business closed and she was laid off. Wolf enrolled in nursing school and later earned her bachelor of science from Cumberland University in Tennessee and her master of science from the University of Tennessee in Knoxville.

Wolf is a behavioral health nurse practitioner for Northern Light’s Fort Fairfield clinic. She said that although moving to Maine was a challenge for her family, she now considers the decision a positive one. She encouraged other women, especially mothers, to not blame themselves when life gets complicated.

“It ended up being the best decision we ever made,” said Wolf, about the move to Aroostook County. “For me, success means being able to make a difference in peoples’ lives everyday.”

This year’s ALL for Women conference also celebrated the 40th anniversary of New Ventures Maine, which provides classes on entrepreneurship and financial literacy to both women and men in Maine communities, and whose northern office is located on the UMPI campus.

Amy Hughes, director of the Maine Department of Transportation’s Civil Rights Office, attended the conference for the first time this year and noted that the event was a great opportunity for women.

In the past the MaineDOT has sponsored New Ventures Maine’s annual Totally Trades conference that exposes middle and high school girls to trade and technical careers.

“I enjoyed the panel discussion. It’s empowering to hear women from all walks of life talk about their struggles and how they have succeeded,” Hughes said.

Just when we thought we were out of the woods with kitten season, it has hit full force.  The past few days have been difficult answering the phone and hearing the stories of why people have litters of kittens they need to surrender.
Campaign Corner END_OF_DOCUMENT_TOKEN_TO_BE_REPLACED