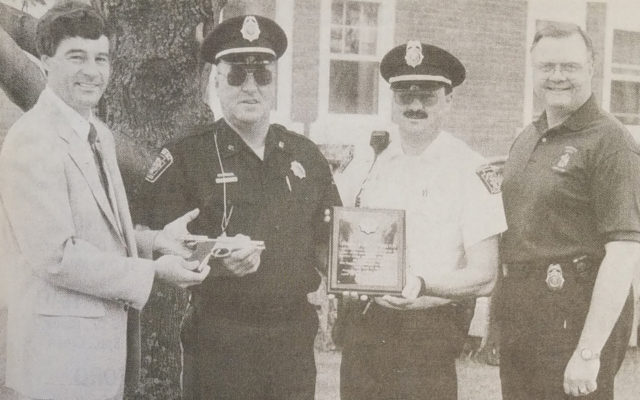 Contributed • June 5, 2019
Both Principal E.M. Libby and H.C. Ketchum, who had offered their services in the YMCA branch of war work, had been accepted and planned to go across seas hoping to make arrangements to sail together.

Traveling across seas — Both Principal E.M. Libby and H.C. Ketchum, who had offered their services in the YMCA branch of war work, had been accepted and planned to go across seas hoping to make arrangements to sail together.

Presque Isle girl honored — Miss Joyce J. Brown of Presque Isle and Miss Hilda Eleanor Silverman of Portland received the two principal awards at Westbrook Junior College commencement exercises on the campus. Dr. Milton D. Proctor, college president, presented Miss Silverman the faculty award for highest academic rank for two years, and Miss Brown, the Universalist Cup, awarded to the student doing a good quality of work and who had made the greatest contribution to the activities program of the college.

Wins championship — Michelle Swartz, daughter of SSgt. and Mrs. Ronald L. Swartz of Presque Isle, represented the state in the national baton twirling championships in St. Paul, Minn. She attended the National Baton Twirling Association State of Maine and Province of New Brunswick championship event and won the Junior Maine title. It made her eligible to compete in the national event during St. Paul’s winter carnival. She was also Junior Miss Maine Majorette that year, second runner-up and Junior Military Champion, third runner-up. She had a total of 94 trophies and 110 medals; and she was a member of the Ann Whitley Swartz Golden Hawks Drum and Baton Corps Maine and New Brunswick.

French students highest — Do you speak French? “Est-ce que tu parles Francais?” For three youngsters in Easton, their hard work and determination in studying the foreign language paid off. Students from French classes instructed by Mary Ruth Nichols at Easton High School participated in exams sponsored by the Euclide Gilbert French Language Foundation Inc., which are designed to test a student’s French aptitude through a series of written examinations. A total of 24,000 students from the six New England states and New York participated in the exam. From this group, a total of four winners were selected from each state, based on the level of their individual instruction, French I-IV. Out of the four finalists for Maine, an unprecedented three were from Easton High School. They were: Blenda Joanne Towers, daughter of John and Cynthia Towers; Simon Alexander, son of Dr. Bruce and Marty Alexander; and Nichole Burtt, daughter of Milton and Vicki Burtt.

Big win — Members of the Central Aroostook Lady Panthers celebrated a 10-2 victory over Limestone in Mars Hill. The win gave coach Sylvanus Pierce’s squad an 8-8 record on the season. The team, seeded sixth, prepared for its game against No. 3 Southern Aroostook in the first round of the Class D Eastern Maine Tournament.

For all it does to refresh us, burn energy and keep us sharp, we all need playtime, dogs and cats included. Sharing playtime with pets has the added benefit of strengthening the bond between us, so we better understand one another.
Campaign Corner END_OF_DOCUMENT_TOKEN_TO_BE_REPLACED