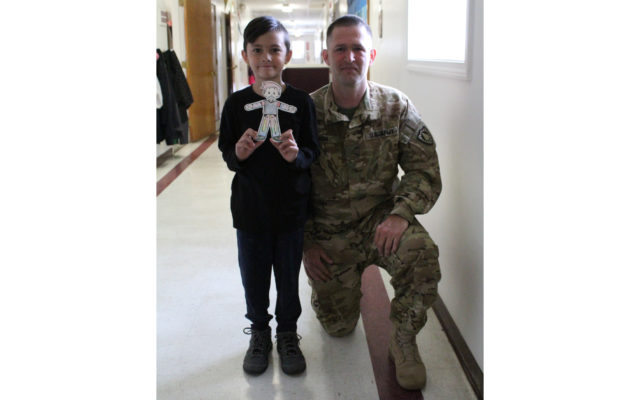 From Afghanistan to Danforth, school gets a new U.S. Flag

Michael LaReux, special to the Houlton Pioneer Times • June 6, 2019
East Grand School now has a new U.S. Flag hanging in its gymnasium that once flew in Afghanistan.

DANFORTH, Maine — East Grand School now has a new U.S. Flag hanging in its gymnasium that once flew in Afghanistan.

A flag ceremony, recently held in the gym in front of students and community members, marks the end of the flag’s 6,327-mile journey from Lashkar Gah, Afghanistan to Danforth thanks to the efforts of Chief Warrant Officer 2 Tim Irish of G-Co, 3-126th General Support Aviation Battalion. Irish carried the flag in his UH-60 Blackhawk helicopter while on a medevac mission in January.

Later, he sent the flag to East Grand School as a part of the “Flat Stanley” project conducted by the second grade glass.

Tim Irish poses for a photo with the flag he carried in Afghanistan and the students in Mrs. Bartlett’s second-grade class.
(Courtesy of Michael LaReux)

The project involved sending paper “Flat Stanley” dolls to various places around the world, where they are photographed at local landmarks. The project is a way for young students to explore world geography, and helps give students a wider appreciation of the world around them.

Second grade student Khamfong Keola sent his Flat Stanley to CWO2 Irish in Afghanistan. Irish, who graduated from East Grand School in 2002, was happy to help. He took photos of Flat Stanley at a number of locations, including inside the Blackhawk. He then sent the photos, Flat Stanley, and the flag back to East Grand School, where they were displayed along with photos from other locations around the globe.

When Irish returned from his deployment, he took the time to come visit Khamfong and the other second graders. They asked questions about the size of the helicopter, his training as a pilot, and the nature of his missions.

Each student had a question prepared, and Irish answered them all. He brought along his helmet and other pieces of his flight gear for the students to try on. The students enjoyed struggling with the weight of the Kevlar vest and the flight helmet.

After the presentation, the entire school headed to the gym to witness Irish ascend a ladder and hang the flag in a place of honor next to the scoreboard. It will hang there as a reminder to all who see it that freedom requires sacrifice and vigilance.

I was mentioning to our board of directors this past week that I got a quarterly report from a large online retailer who will donate a portion of my purchases to a charity I select.
Campaign Corner END_OF_DOCUMENT_TOKEN_TO_BE_REPLACED