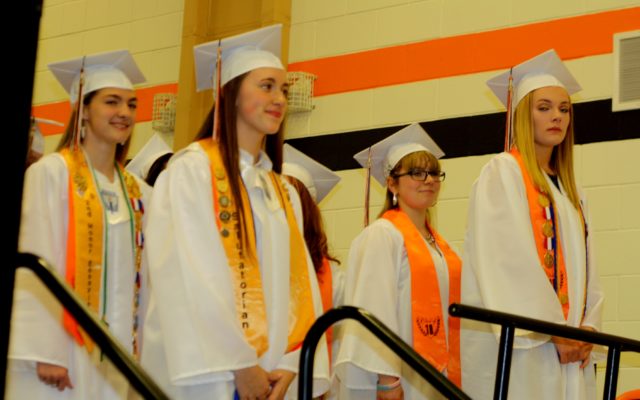 Melissa Lizotte • June 8, 2019
The 18 members of Ashland District School’s Class of 2019 officially said goodbye to the school that many of them have attended since pre-K.

ASHLAND, Maine — The 18 members of Ashland District School’s Class of 2019 officially said goodbye to the school that many of them have attended since pre-K on Friday, June 7, leaving with no shortage of advice from their fellow classmates and a special guest.

Salutatorian Mackenzie Hall, whose father Joel Hall is the Ashland District School principal, began the evening by dedicating this year’s graduation ceremony to longtime music and band teacher Larry Hall, who passed away in 2018. Larry Hall was her grandfather and is the namesake of the school’s performing arts center.

“Larry Hall inspired hundreds of students and without his passion and drive we wouldn’t be sitting in this beautiful school building,” Mackenzie Hall said, referring to her grandfather’s support for the new Ashland school building that was completed in 2010.

Like many graduates of small Aroostook County schools, Mackenzie Hall’s earliest memories involved fun times on the playground with her classmates in elementary school before the awkwardness and uncertainty of middle school took over. She recalled her high school years as ones when the students became who they are today.

While looking forward to the future, Mackenzie Hall reflected on a quote from actor Bradley Whitford: “Take action. Every story you’ve ever connected with, every leader you’ve ever admired, every puny little thing you’ve ever accomplished is the result of taking action. You have a choice. You can either be a passive victim of circumstance or you can be an active hero of your own life.”

She encouraged her classmates to be proud of both the small and large accomplishments that helped lead them to the graduation stage.

“When it comes to being an active hero in your own life, it takes perseverance, determination and strong willpower to succeed,” Mackenzie Hall said. “Let’s push ourselves to the limits in order to succeed and be a hero. We will not sit on the sidelines.”

Valedictorian Daniel Wortman remembered how each step of he and classmates’ lives — from elementary to middle school and then high school — brought with them new goals to aspire towards. With Wortman and his classmates headed toward post-secondary education, their goals will now center on pursuing their chosen career paths.

But though moving forward is an important step in their journeys, Wortman also advised his fellow graduates to enjoy the everyday moments of life.

“There’s nothing wrong with having something to aim for, but isn’t it also important to enjoy the present? I would like to encourage everyone, whether you’re in the process of completing a goal or you are finding your next challenge, to enjoy the now. Take chances and try new things,” Wortman said.

Joshua P. Haines, commander of the Maine State Police’s Troop F in Houlton, was year’s graduation speaker. Haines is a graduate of Ashland’s class of 1996 and has gone on to have a nearly 20-year career in state law enforcement.

When speaking to the graduates Haines advised them to embrace qualities that can help them establish rewarding careers and meaningful relationships: hard work, making good choices, treating people with respect and maintaining a positive attitude.

“If you work hard at whatever you do good things will happen. Don’t procrastinate. Procrastination is like a rash. As soon as it starts it spreads, and nobody likes a rash,” Haines said, inspiring laughs from the audience. “Be the students or employees that set the standards that others strive to meet.”

Haines told the graduates that there will be times in their lives when people won’t always treat them with respect. But they could use that dilemma to be the person that inspires those around them and leaves a more positive impact.

“Everyone leaves a legacy. No one sets out to leave a bad legacy, but unfortunately that happens,” Haines said. “So wherever your road leaves from here, work hard, be kind and be positive. If you do all that, you’ll leave a legacy to be proud of.”

Just when we thought we were out of the woods with kitten season, it has hit full force.  The past few days have been difficult answering the phone and hearing the stories of why people have litters of kittens they need to surrender.
Campaign Corner END_OF_DOCUMENT_TOKEN_TO_BE_REPLACED