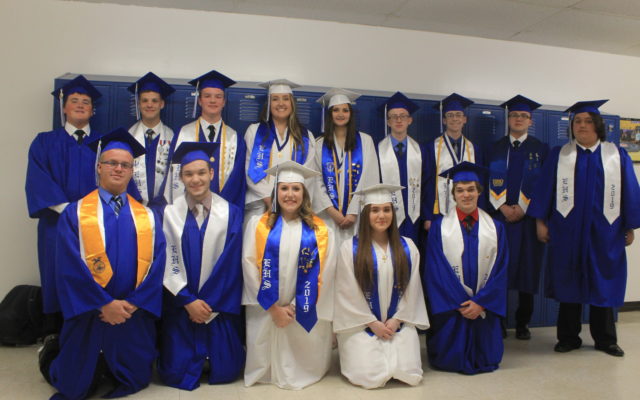 Valedictorian Joshua Rooney welcomed the crowd gathered in “The Barn,” the high school’s gymnasium, as he spoke to his fellow students’ hankering for summer after a long winter and more than a decade in school.

“I think by now, almost all of us have caught the “senioritis” disease, but today is the last day you’ll suffer the side effects. Many of you have been here for a long time.”

As a student who transferred to Easton from the Cornerstone Christian Academy school that closed in 2017, Rooney said he is a relative newcomer to Easton with a “different perspective.”

“I would describe the beginning of my experience at Easton Jr.-Sr. high school as change: a change that was at first uncomfortable, but sparked growth; a change that brought opportunity, opportunity for academic growth, a new environment and new relationships.”

“I was welcomed with plenty of kindness and acceptance into my class family. I was welcomed into what would also be a mass of new and memorable experiences.”

Rooney said he was thankful for support from family, friends, faculty and staff, and that he was looking forward to he and his classmates moving into the future.

“We enter the next step of shaping and transformation that defines our future. We’ve entered a time where we are going to have to take care of responsibilities, laundry, dishes, cleaning … let alone learning how to cook! It’s time to jump further out of our comfort zone, and that’s the place we should be. That zone is where we see the most growth.”

He went on. “Here I stand before future law enforcement, business owners, engineers, nurses, military service, all people who have the potential to be successful in accomplishing their goals,” he said. “My advice to you: “Don’t be afraid to jump into the uncomfortable zone or try something new, even if that means getting your hands dirty. Just because you graduated doesn’t mean that you’ve finished your education.”

Maine is more than eight months into Medicaid expansion under the federal Affordable Care Act and trends around who is enrolling and where they live are starting to emerge, bucking some expectations and pointing out access challenges.
Pets END_OF_DOCUMENT_TOKEN_TO_BE_REPLACED