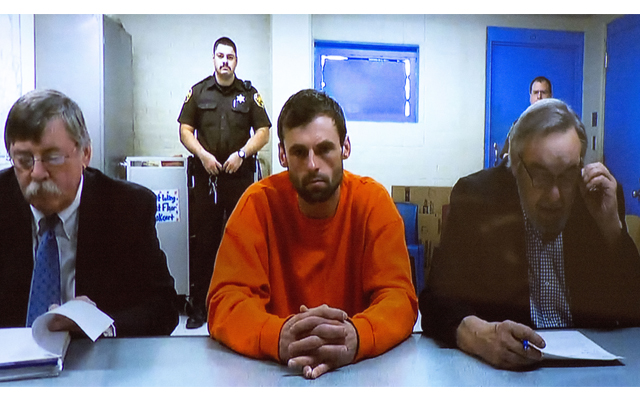 Peaslee snaps at witness in court

Jen Lynds • June 10, 2019
The state rested its case Monday afternoon against an Easton man who is accused of killing his stepfather after an outburst from the accused delayed the trial for more than a half hour.

HOULTON, Maine — All parties rested their cases Monday afternoon in the trial of an Easton man who is accused of killing his stepfather.

This came after an outburst from the accused delayed the trial for more than a half hour during the morning session.

Paul Hilenski Sr. died from a gunshot wound to the chest after his stepson, James Peaslee, allegedly came to his home in the evening hours and fired multiple gunshots at him, according to testimony on the third day of Peaslee’s murder trial.

The 38-year-old is accused of killing Hilenski Sr. in January 2018, at Hilenski’s Boundary Line Road home.

The state contended that multiple security videos taken from the home of 79-year-old Hilenski Sr. depict Peaslee committing the killing.

Peaslee was indicted on charges of murder and using a firearm to intentionally or knowingly cause the death of Hilenski. He pleaded not guilty and is being represented in Aroostook County Superior Court in Houlton by attorneys Stephen Smith and John Tebbets. Testimony began on Thursday afternoon after a jury was seated before Superior Court Justice Harold Stewart II.

Assistant Attorneys General Leanne Robbin and Robert “Bud” Ellis contend that Peaslee was furious over a probate decision involving the estate of his mother, Janet Hilenski.

On Monday morning, the court heard testimony from Matthew Clark, who is currently incarcerated at the Aroostook County Jail on charges of theft, burglary and receiving stolen property. He told the court that he had known Peaslee for approximately 20 years after they met in a Houlton High School shop class.

“He said he went up to the door in ‘military mode,’ knocked on the door and shot him,” he said of the killing. “He told me, ‘you should have seen that old bastard run.’”

At that point, Peaslee launched to his feet and angrily pounded on the defense table.

Stewart cleared the courtroom and met with the attorneys. Smith asked for a mistrial, but the motion was denied.

Clark later said that Peaslee told him he headed to Limestone after the killing, tossed the gun into a forest, and put the clothes back on he was wearing at the Mars Hill One Stop.

“He wiped down his right hand with bleach in case they did a gunshot residue test,” he added.

Smith sought to paint Clark as a man who was only testifying in court in the hopes of receiving a lesser sentence in his upcoming court case. Clark denied this, saying he was looking to “do the right thing.”

The defense has questioned several witnesses about Peaslee’s resemblance to his brother, George Peaslee, since the start of the trial. George Peaslee did not testify, nor was any picture of him shown in court.

State Police Detective Lawrence Anderson said that George Peaslee was questioned at the State Police barracks the day after the killing. He said that George Peaslee had a mustache and “noticeably longer facial hair” than the man he identified as James Peaslee in Hilenski Sr.’s security video of the shooting. He said that James Peaslee had a “strong five o’ clock shadow” in the video, but did not have long facial hair.

Concerned about his personal security and his property, the victim had an extensive security system at his home. It recorded the shooting and its aftermath, including Hilenski’s death in his kitchen. An exterior video shows an individual run up the steps of the Hilenski home and knock on the door. He then fires several rounds into the home through the screen door and a window in another door. He then ducks, fires more rounds, and runs away.

An interior video showed the victim going to answer the door and being fired at. He is then shown reaching for a landline phone in the kitchen, sitting down in a chair, and quickly thereafter falling to the floor and dying.

Gloria Dewitt, Peaslee’s stepmother, also testified. She said that she felt the individual pictured in the shooting video looked “a lot thinner than my son [James] ever did.”

Taking the stand again, State Police Detective Lawrence Anderson testified that Dewitt had been shown the shooting video 14 months after the killing. He said that she “became teary eyed and said that she thought the person in the video was who we thought it was, which was James Peaslee.”

The defense called two witnesses to the stand Monday, including Walter Dewitt, Peaslee’s father. In contentious testimony, he told Ellis that he felt that law enforcement was “out to get” his son and that he didn’t think it was him in the shooting video. Ellis got him to acknowledge, however, that when first shown the video by police, all he would say was that he had “no comment” on it. He acknowledged during testimony that he didn’t deny that his son was pictured on the video.

Jurors will be handed the case tomorrow after closing arguments.

Halfway Home Pet Rescue in Caribou has partnered with the Houlton Humane Society shelter for a cat spay and neuter clinic on Saturday, May 30, and Sunday, May 31, in Houlton.
Campaign Corner END_OF_DOCUMENT_TOKEN_TO_BE_REPLACED