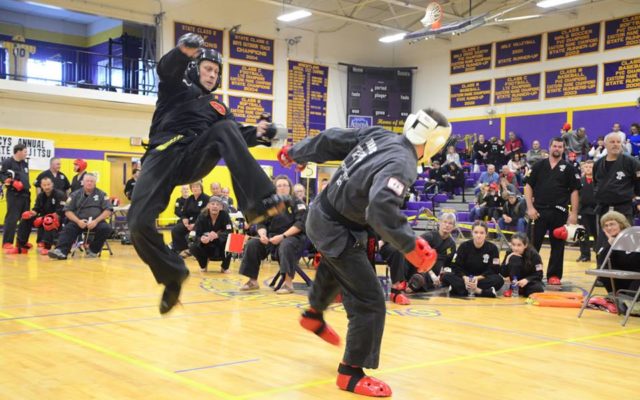 Contributed • June 11, 2019
Aroostook County’s oldest, and only, karate and ju-jitsu tournament for over two decades celebrates its 28th anniversary this month hosted by the Graves Institute of Self-Defense.

MARS HILL, Maine — Aroostook County’s oldest, and only, karate and ju-jitsu tournament for over two decades celebrates its 28th anniversary this month hosted by the Graves Institute of Self-Defense.

On Saturday, June 15, martial artists representing several styles and traveling from throughout New England and Canada will meet at the Central Aroostook High School gym to in Mars Hill to compete in Graves’ Summer Kick-Off Karate and Ju-Jitsu tournament. Head Instructor, Grand Master Bill Graves, the Black Belts and students of all 9 branches of Graves’ Institute of Self Defense will host the event.

“This is the only tourney north of Bangor and one of only seven through the entire state each year, three of which are put on by Maine Ketsugo and Karate Association, to which Graves Institute of Self Defense belongs,” said Graves.

Martial arts students ranging from 5 to over 60 years old will test their skills in bouts of point sparring, form kata, weapons kata, ju-jitsu throwing and falling, and power impactor events. To assure fairness and top-rate competition, divisions will be set up by age, gender, height, weight and skill levels, which are determined by belt colors and stripes. Beginner students wear white belts, then become novice yellow belts, earn intermediate degrees of green and purple and move up to three degrees of brown belt before finally, after many years of study, having the opportunity to test for black belt and earn the title of Sensei.

More than 200 trophies and 100 medals will be awarded to the top three winners in dozens of divisions.

Black belt matches will be the keynote of the day’s events, not just because of the spectacular techniques in the fighting and throwing matches, but also due to the Grand Championship trophies which are the largest of any tourney in Maine. Each member of the top ju-jitsu pair will receive a trophy, as will the winning women’s black belt fighter in the 17-34 age group and the senior 35 and older age division. Three grands will be presented to black belt men; one in the 17-34 group , another in the 35 to 44 senior men’s sparring, and the third to the 45 and over executive division winner.  The ornately decorated trophies are sponsored by local businesses.

“Martial arts tournaments are exciting events for spectators as well as participants as six to eight competition rings are underway at the same time. A chief referee and four corner judges oversee each ring, taking care of scoring, trophy presentations and explanation of events to spectators,” said Graves. “As soon as one division finishes, another set of competitors is called up, so the action remains non-stop.”

The ju-jitsu competition promises to be an exciting and entertaining event. Pairs of martial artists of the same belt levels perform routines they have created to imitate an attack and a self-defense situation that might occur on the street. Each of the duo executes three throws in random order and a panel of five judges score the pair on attitude, precision, difficulty and effectiveness. While all belt levels are highly competitive, the black belt division vying for the pair of grand championship trophies remains the highlight of the event.

Doors at the Mars Hill High School gym will open at 9 a.m. for competitors and at 9:30 for spectators. Events begin at 10:30.

“For those folks who have never experienced a martial arts tournament, it’s a thrilling spectacle and all are welcome to attend,” said Graves. “Black belt events are truly impressive and yet the chance to watch the younger students fight and throw draws a lot of attention and applause as well.”

Concessions will be available on site throughout the day. Despite the number of competitor and diverse divisions, the tournament usually finishes by 2:30 or 3 p.m.

Check Graves Institute of Self Defense on Facebook for photos, videos and pre-tourney information.

Halfway Home Pet Rescue in Caribou has partnered with the Houlton Humane Society shelter for a cat spay and neuter clinic on Saturday, May 30, and Sunday, May 31, in Houlton.
Campaign Corner END_OF_DOCUMENT_TOKEN_TO_BE_REPLACED