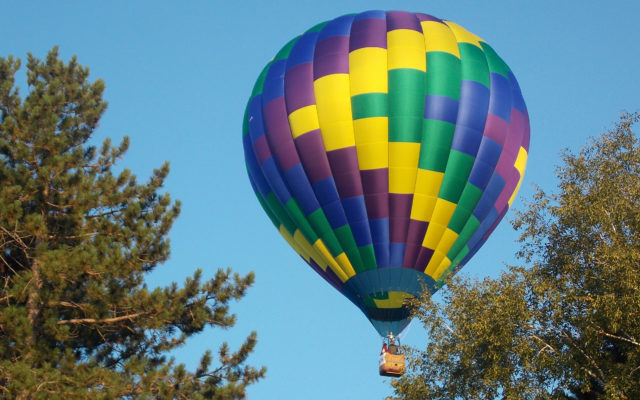 Contributed • June 13, 2019
With just over two months to go, the 2019 Crown of Maine Balloon Fest committee is busily making plans for this year’s event.

PRESQUE ISLE, Maine — With just over two months to go, the 2019 Crown of Maine Balloon Fest committee is busily making plans for this year’s event. The festival will take place in Presque Isle Thursday, Aug. 22, through Sunday, Aug. 25, and will feature live music, family-friendly activities, and of course, hot-air balloons.

The COMBF plans to triple the size of the craft and vendor fair, which will take place on the Northern Maine Fairgrounds Friday, Aug. 23, and Saturday, Aug. 24, during the festival. The event will showcase crafters from throughout the state and provide a unique shopping selection for all attendees.

Organizers are making efforts to increase the festival’s reach throughout the Maine and New Brunswick, and a new logo and website were launched at the beginning of February.  The website has been completely redesigned to be more user friendly and easy to navigate. It houses the schedule for this year’s festivities, balloon and pilot information, sponsor features, a photo gallery, vendor fair information and more.

“We are hoping that rebranding the event and getting information to the public earlier in the year will draw people from outside the region that wouldn’t otherwise come,” said Jordyn Madore, co-chair of the festival.

“We have so much to offer in The County that people may not realize, and the balloon festival is great way to bring them here and hopefully get them to return,” she said.

So far, the COMBF has also confirmed 15 pilots coming from near and far to fly the beautiful skies of Aroostook County, to meet friends old and new, and for an experience unlike any other. One of these pilots, Wendell Purvis of Tallahassee, Fla., has been taking part in the COMBF nearly since its inception in 2004.

“First time I was in Presque Isle, I was impressed not only with the people and with how friendly they were,” said Purvis, “Presque Isle has some scenery that is top notch that you really can’t find anywhere else in the country.”

Purvis flies the balloon Tracer, which is familiar to county sky-watchers, and admits that coming to Presque Isle is something he very much looks forward to each year.

“Out of all the places in the world I could be, I’d rather be here. I plan my whole year around the time I’m going to be in Presque Isle,” said Purvis.

2018 Pilot of the Year, sponsor of the COMBF and County native, Derik Smith, enjoys each aspect of the festival. However, there is one thing that stands out most that makes it such a special time of year.

“The thing I enjoy most about the event and being a pilot is the people I get to spend time with. The ballooning community is full of friendship and camaraderie,” said Smith. “Even the folks you just met. Some of my best friends have come to me through ballooning.”

The annual balloon festival is an exciting time of year for many people, and one that will be here soon.

For more information on the festival, visit combf.org, or follow the event on Facebook at Crown of Maine Balloon Fest.

Just when we thought we were out of the woods with kitten season, it has hit full force.  The past few days have been difficult answering the phone and hearing the stories of why people have litters of kittens they need to surrender.
Campaign Corner END_OF_DOCUMENT_TOKEN_TO_BE_REPLACED